Posted on December 28, 2016 by Matt Hough
A classic crime movie that only gets better with age. 4.5 Stars

The proud father of such 1950’s cinematic heist films as Jules Dassin’s Rififi and Stanley Kubrick’s The Killing, John Huston’s The Asphalt Jungle can stand as tall as any of them.

The proud father of such 1950’s cinematic heist films as Jules Dassin’s Rififi and Stanley Kubrick’s The Killing, John Huston’s The Asphalt Jungle can stand as tall as any of them. Tough, gritty, and monumentally engrossing, The Asphalt Jungle remains one of the high water marks of film noir with a sterling cast of actors playing characters you won’t soon forget in a crime caper that really laid the groundwork for all that would follow. Toss in a couple of memorable calculating dames, and you’ve got yourself one movie classic.

No sooner is he out of prison than Erwin Riedenschneider (Sam Jaffe), affectionately known as “Doc,” is planning his next heist, and it’s a dilly: a half a million dollars’ worth of gold, platinum, and gems from the city’s largest jewelry store. To accomplish the plan, he’s going to need $50,000 to pay off in advance three necessary henchmen: safecracker/locksmith Louis Ciavelli (Anthony Caruso), getaway driver Gus Minissi (James Whitmore), and muscle Dix Handley (Sterling Hayden). He goes to eminent lawyer Alonzo D. Emmerich (Louis Calhern) for the front money offering him one-third of the take once the goods are fenced. Unknown to the others, Emmerich is actually near bankruptcy (he goes to a bookie – played by Marc Lawrence – to front the money), and he hatches his own scheme with shady private detective Bob Brannom (Brad Dexter) to steal the goods from the robbers once they return. But one little miscue during the robbery leads to a domino effect on the scheme as small things begin to go wrong seemingly ruining everyone’s chances for a happy ending.

Based on the crime novel by W.R. Burnett, the screenplay by Ben Maddow and John Huston lays the scenario out pretty straightforwardly: the explaining of the mission and the rounding up of the crew to carry it forward, the heist itself shown in meticulous detail, and the aftermath when plans go awry, new schemes must be improvised, and the police begin a city-wide dragnet to bring in the criminals. What gives such straightforward storytelling its edge, of course, comes from director John Huston’s magnificent directorial choices: the savvy mixture of medium shots (often with one or more faces on different planes looking in different directions but conversing with one another) and close-ups where with this magnificent set of actors, thoughts and emotions constantly flicker across their faces while we watch the wheels turn. The film begins and ends during the daytime hours, but everything in between is nighttime, perfect for the creepy-crawly humanity that scurries across the screen, each one loaded with his or her own agenda and, with a few exceptions, putting his or her objectives above anyone or anything else. Due to the Production Code of the era, there are occasional interruptions to assure us that the one crooked cop we see on the take, Lieutenant Ditrich (Barry Kelley), is the exception to the rule, emphasized by the braying police commissioner (John McIntire), but Huston gets the last laugh as he allows the chief to oversell his department’s expertise and the viciousness of the men they’re bringing down, very much counter to the rough but by no means vicious crooks we’ve just spent two hours with, showing that even with the upstanding citizens, there’s a bit of larceny present there, too.

Huston has cast the film to perfection, each actor simply tailor-made for the roles they inhabit. It’s certainly the high water mark for Sterling Hayden (he thought so, too) and Sam Jaffe (Oscar-nominated for his performance here): Hayden playing the tough guy with a soft heart for his old pony ranch which he’d give anything to return to and Jaffe with his Old World manners and long-lived common sense but whose attraction to pretty young girls proves his downfall. Louis Calhern as the slick but empty lawyer oozes smarmy diction and behavior but underneath, we know he’s as big a rat as any of the more low class thugs. James Whitmore as diner owner Gus and Anthony Caruso as family man Ciavelli etch memorable portraits with much less screen time, and Brad Dexter as the crooked private eye and Marc Lawrence as bookie Cobby likewise fit right into this sleazy world of rackets and schemers who aren’t to be trusted. Three women operate on the periphery of the action but make notable contributions nevertheless. Jean Hagen touchingly plays Doll Conovan, hung up on Dix and willing to do anything to be with him. Lawyer Emmerich has two women in his life who occupy opposite ends of the spectrum: his pathetic invalid wife May played in fine fashion by Dorothy Tree and as his voluptuous mistress young enough to be his granddaughter, the effervescently young Marilyn Monroe. Though Monroe had appeared in four previous films, in either walk-ons or support work in B-films, this was the role that first thrust her into national prominence: Angela Phinlay, the kittenish sultry blonde who calls Emmerich “Uncle Lon” and is swathed in tight jumpsuits or a slinky velvet gown with diamond accessories. So strong is her allure in her two appearances in the movie that director Joseph L. Mankiewicz took notice and cast her in a key supporting role in the same year’s All About Eve (which led to a new Fox contract and ultimate superstardom). By the time MGM reissued The Asphalt Jungle to theaters, Marilyn had become one of the country’s biggest box-office stars, and her billing on the posters was moved from eleventh place to the top of the bill.

The film’s original theatrical aspect ratio of 1.37:1 is faithfully rendered in 1080p resolution using the AVC codec. Gone are the scratches, dirt, and debris from the Warner DVD release of the movie. Instead, we get a transfer of great clarity with lots of detail in those Huston close-ups. Grayscale may not feature the deepest black levels in the business, but they’re quite fine, and shadow detail is most often splendid. There are fluctuations in contrast along the sides of the frame occasionally, but overall the transfer is wonderful. The movie has been divided into 31 chapters.

The PCM 1.0 (1.1 Mbps) sound mix offers the era-expected blending of nicely recorded dialogue (though line looping is occasionally very noticeable), superbly realized atmospheric effects (lots going on during the heist sequence), and Oscar-winning composer Miklos Rozsa’s outstanding score. There is some muffled crackle which can be heard in quieter moments of the film, but engineers have done what they could with the aged sound elements.

Audio Commentary: carried over from the Warners DVD, Dr. Drew Casper offers one of his nattery, repetitive commentary tracks filled with reflections on key elements of the movie but neglectful of basic research on the actors he’s discussing on the screen (would having a cast list before him during the recording have been so difficult so he could have referred to actors like Anthony Caruso or Dorothy Tree by their names when trying to make a point?). Three times, vintage comments from actor James Whitmore talking about the film are inserted into the track. It’s a pity the archives didn’t have more of the actor’s comments about the movie classic.

John Huston Introduction (0:50, HD): the writer-director comments on what the film is presenting.

Pharos of Chaos (1:59:02, HD): a 1983 documentary on actor Sterling Hayden finding him living in solitary on a river barge and ruminating often while high on grass or booze about his present vagabond lifestyle, his writing, his appearance before HUAC, and his movie career.

Eddie Muller Video Essay (24:10, HD): the film noir historian breaks down components of the film and its participants before and behind the camera.

City Lights (48:28, HD): a magnificent 1979 interview of writer-director John Huston by Canadian interviewer Brian Linehan who is able to touch on only a fraction of the director’s large filmography of classic titles.

The Huston Touch (6:01): an audio recording of John Huston commenting on his writing process and the design of the film’s look and sound.

Enclosed Pamphlet: contains the cast and crew list, information on the video and audio transfer, and critic Geoffrey O’Brien’s analysis of the film.

An undisputed classic heist film, The Asphalt Jungle has only gotten more respected and studied in the years since its initial release, and Criterion’s Blu-ray release finally gives it the home video transfer such a masterpiece deserves. Complete with a magnificent set of bonus features, this Criterion release comes with the highest recommendation. 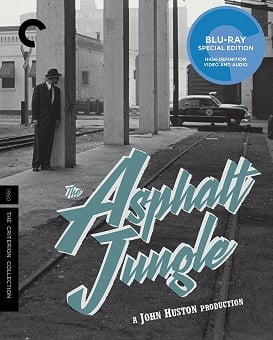