Forum List What's new Dark Style Change width
Log in Register
What's new Search
Menu
Log in
Register
Navigation
Install the app
More options
Dark Style
Close Menu
Posted on September 4, 2018 by Todd Erwin
You are using an out of date browser. It may not display this or other websites correctly.
You should upgrade or use an alternative browser.
It's about time... 4.5 Stars

Kino’s new licensing deal with Disney is starting to pay off for fans of some of the Mouse House’s live action output from the 1990s. Deep Rising, Stephen Sommers cult favorite creature feature at sea finally gets some respect with a full-blown special edition.

John Finnegan (Treat Williams) is a boat captain for hire, whose catch phrase is “If the cash is there, we don’t care.” As Deep Rising opens, Finnegan is piloting a group of mercenaries through uncharted waters, and when his mechanic, Joey Pantucci (Kevin J. O’Connor), stumbles across torpedoes in the cargo bay, he begins to wonder if he’s gotten himself into some serious trouble. As it turns out, he has. Apparently, the mercs are planning to rendezvous with an ocean liner on its maiden cruise, with plans on sinking her and looting it for treasure. But a giant squid-like creature has beaten them to it, disabling the boat’s engines and devouring most of the passengers and crew. The only survivors are the ship’s captain (Derrick O’Connor), the ship’s owner Simon Canton (Anthony Heald), and a small-time thief, Trillian St. James (Famke Janssen). Now the goal is to get off the cruise ship, back to Finnegan’s boat, and escape in one piece before the tentacled sea creature picks everyone off.

Before Deep Rising, writer-director Stephen Sommers made two live-action family films for Disney, The Jungle Book and The Adventures of Huck Finn. His next film, Deep Rising, would be a departure, resulting in the types of movies Sommers is best-known for: fast-paced action with over-the-top visual effects and at least enough witty dialogue for the film’s trailer. In other words, guilty pleasures. Treat Williams, while not a usual choice as a male lead for film of this genre (Harrison Ford was offered but turned down the role), displays his knack for comedy as Finnegan, something he usually doesn’t get to do very often. Famke Janssen is not only stunning to look at, she also has some good repartee with Williams. Kevin J. O’Connor, Finnegan’s sidekick, is best in small doses, and is largely over-used here, and Sommers would reduce the roles offered to him in The Mummy, Van Helsing, and G.I. Joe: The Rise of Cobra. The rest of the cast are merely stereotypes to serve the plot, and they pull it off quite well. Although Deep Rising failed to deliver at the box office, the film has generated a large fan base thanks to DVD and cable, and over the years, it has grown on me, earning an addiional half-point since my last review.

Deep Rising was previously available as a double-feature disc from Mill Creek, which included the film The Puppet Masters on the same disc. I gave the video transfer on that release a generous 3.5 out of 5, and am happy to say that my 4.5 out of 5 for this Kino release is high praise and puts that earlier release to utter shame. While I cannot confirm this is a new transfer, gut instincts will indicate that it is. Right off the bat, contrast is greatly improved, with deeper blacks that retain shadow detail very evident in both the opening credits and the first shots of Finnegan’s PT boat skipping along the ocean at night. Colors are more vivid and consistent, particularly in the use of reds (although most of the violence is off-screen, there is a lot of blood splatter). Famke Janssen’s red dress, in particular, shimmers without ever blooming or banding. Detail is exceptional, revealing facial features and textures of the beautiful set design, but sometimes reveals how old the CG creature work is. This is a major upgrade from the previous release.

The DTS-HD Master Audio 5.1 track included on this Kino release is a different encode from the one included on the previous Mill Creek release. For starters, the Mill Creek track had an average bitrate of 4 Mbps often maxing out at just over 5 Mbps, while the track on the new Kino release averages at 2.2 Mbps and maxing out at around 3.4 Mbps during some of the more active passages. As has been said many times, it’s not necessarily about the bitrate, it has more to do with how the compression, albeit lossless, is applied. And in this case, the soundtracks sound almost identical, with Kino’s track getting a slightly wider dynamic range (hence the half-point increase). Kino has also thrown in a DTS-HD MA 2.0 stereo track.

From my previous review of the Mill Creek release: “The DTS-HD Master Audio 5.1 track is very good, with nice stereo separation and clear dialogue, deep bass, and excellent use of surrounds. Jerry Goldsmith’s electronic/orchestral hybrid score also benefits from the dynamic range and higher fidelity of the lossless codec. This is a genuinely fun mix.”

Kino goes all-out by loading this disc up with a plethora of special features.

Audio Commentary with Director Stephen Sommers and Editor Bob Ducsay: This is a fun track, listening to these two long-time friends from USC film school joke around while dispensing various facts about the making of the film.

Wet Cold Canadian Summer with Wes Studi (1080p; 8:23): The Native American character actor discusses his work on the film, including his fear of swimming in the newly-created tanks at the Vancouver studio, working with visual effects, and how he spent much of his downtime on set.

Pantucci the Grease Monkey with Kevin J. O’Connor (1080p; 14:17): The actor spends much of the time talking about his collaboration with director Sommers.

The Argonautica with Anthony Heald (1080p; 13:16): The actor discusses his last-minute casting on the film and how he got the part, how his death scene book-ended his participation on the shoot, and the nasty infection he caught after an on-set injury.

Deep Terror with Dean Cundey (1080p; 11:48): The famous cinematographer explains how he got the job as Second Unit Director on Deep Rising (and what that job title actually means), and how he applied what he learned working with John Carpenter on this film.

Bubblefunk and the Big Kaboom: The Visual Effects of “Deep Rising” (1080p; 16:50): Visual Effects Supervisor John Barton explains how ILM became involved in the project and the importance of maintaining the look and feel of what the previous effects team at Dream Quest Images had completed, while Van Ling discusses the involvement of Banned From the Ranch and how the company got their name.

From the Depths: The Practical Effects of “Deep Rising” (1080p; 9:25): Doug Morrow and Brad Proctor discuss, as the title suggests, many of the practical effects used on the film.

Sinking the Boat with Howard Atherton (1080p; 14:05): Director of Photography Howard Atherton discusses how he kept turning down Deep Rising as he wanted to distance himself from action pictures, as well as many of the ways the movie was shot.

ILM – Animatic Final Sequence (480i; 7:43): Various sequences from the last act interspersed with VFX storyboards. The sequence contains no audio.

ILM – DR16 Breakdown (480i; 2:24): Breakdown of the final tracking shot from the film. The sequence contains no audio.

Animated Image Gallery (1080p; 2:32): Actually, more like a still gallery of production and promotional photos without the option of chapter forwarding to the next photo.

Deep Rising Theatrical Trailer (480i; 1:25): Interestingly, this is not the same trailer that was included on the Mill Creek release. I believe this is actually the teaser trailer.

For fans of Deep Rising, this special edition from Kino Lorber is a no-brainer, either as an upgrade from Disney’s out of print non-anamorphic DVD or Mill Creek’s so-so doule-feature Blu-ray.

Glad to hear this is a nice upgrade. I have the Mill Creek blu but hadn't got to watch it yet. The last time I watched this film was the old DVD. Looking forward to hopefully including this in my Scary Movie marathon next month.

I recently watched this for the first time on the double-bill disc with The Puppet Masters and enjoyed the film. I do have to take issue with your criticism of Kevin O’Conner. As I’m watching the film, I was bothered a little by him because I kept wondering why he was familiar and then I remembered he’s Benny from The Mummy. I enjoyed him in that film and thought it was a mistake to kill off the character and I missed him in the sequels.

Anyway, I thought he was fine in this film. Considering all the extras, looks like I have to buy this release too.
You must log in or register to reply here. 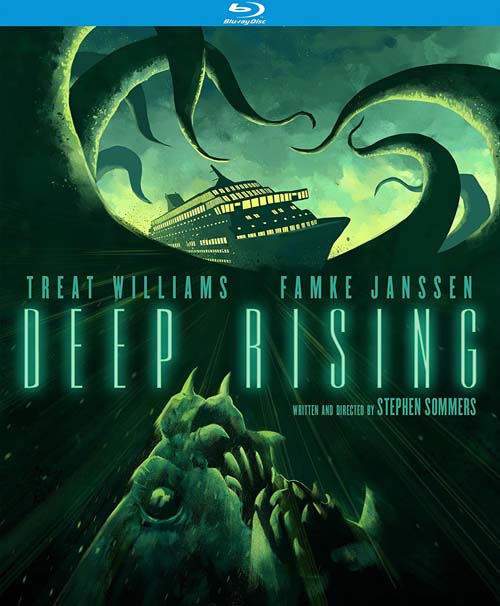