Posted on September 4, 2018 by Josh Steinberg
Jane Russell headlines as the titular character in this CinemaScope classic 4 Stars

Raoul Walsh was a great director of actors, particularly when it came to characters finding themselves at a crossroads or who have already found their way over to the wrong side of the tracks. His direction was rarely meant to sensationalize or moralize, but rather, would put the audience in the shoes of its characters until their choices no longer seemed controversial but necessary. In his best remembered films, these characters were often men; what makes The Revolt Of Mamie Stover so interesting is that Walsh applies all of those skills to present a female heroine as rich and complicated and interesting as any of his male protagonists.

As the film begins, it’s 1941 in San Francisco, and prostitute Mamie (an excellent Jane Russell) is being pressured by the local police to leave town immediately. She catches a boat to Honolulu, where she meets Jim Blair (Richard Egan), a writer who becomes interested in her. Though they share a shipboard romance of some kind, upon arriving in Hawaii, Jim reveals that he has a long term love interest living there, and he and Mamie end their affair. Through a connection from an old friend, Mamie winds up working as a hostess of sorts at an overpriced dance club frequently populated by off-duty Navy men. The cruel owner and her sadistic assistant (Agnes Moorehead and Michael Pate) enforce a strict set of rules for the girls that work for them, but as Mamie’s popularity among the clientele rises, she finds herself in a position of power. Meanwhile, Mamie has rekindled her relationship with Jim (despite it being against the rules for club employees), but everything changes when Pearl Harbor is attacked. Mamie is able to use the circumstances surrounding the U.S. entry into the war to amass a real estate empire and more control at the dance club, but it comes at the cost of putting a strain on her relationship with Jim, who ultimately is unable to fully accept a woman that does not need a man to provide for her.

As a film that dared to suggest that a woman could live a fulfilling life and succeed at business without the help of a man, The Revolt of Mamie Stover is ahead of its time. It subtly calls into question the values of its time by showing how a woman like Mamie is able to thrive without Jim there to hold her hand every step of the way, while showing that she is expected to give up that independence at the drop of a hat when Jim is ready for her. If Mamie’s beginnings as a prostitute might have been legally and morally questionable, the film makes clear that her work in the dance hall does not cross the same lines. While she uses her physical appeal and charm to sell overpriced, watered down drinks to lonely gentlemen, she no longer sells herself. More importantly, she sees this new role as a means to an end, a way to earn enough money to settle her obligations and put her on the path to true independence. Mamie is as big of a schemer and as single-handed in her pursuit of a good living as many of Walsh’s male protagonists. Is being an independent woman incompatible with being a romantic partner? Is it fair that a male actor engaging in similar practices – say, a Humphrey Bogart type – would be someone an audience would effortlessly identify with, while a female character doing the same would seem shocking? The film suggests that it was in 1956, but that it ought not to have been. The production code of the time dictated that Mamie should be punished in some way for her transgressions, but the film makes this far less heavy handed than it could have been.

Walsh handles all of this with a great sense of rhythm and pacing, moving the story along without it ever feeling rushed. Sydney Boehm’s screenplay (an adaptation of William Bradford Huie’s novel) does a good job of laying out the characters and scenarios but allowing actors space to bring them to life. Jane Russell owns the role and the screen, of course, but the supporting cast here is also excellent. Leo Tover’s CinemaScope photography, particularly of the Hawaiian locations, is never anything less than gorgeous, and he uses the wide frame to great effect. Hugo Friedhofer’s lush score is as much a treat to the ears as the visuals are to the eyes.

The Revolt of Mamie Stover can be seen as a film of its time, but like the best of Raoul Walsh’s films, lives more in the grey areas that remain relevant today. The questions the film raises had no easy answers in 1956 and are often still topics of debate today; if the specific plotting of the film seems more of the time that it is set in, the larger themes have a more timeless quality.

The Revolt of Mamie Stover is presented on this Twilight Time disc in a brand new 4K transfer created by Twentieth Century Fox. Thought the packaging states the aspect ratio as being 2.35:1, the transfer appears a bit wider, and the IMDb (though not completely reliable) suggests the film is 2.55:1, which seems more accurate. (I did not break out the measuring tape to confirm.) Whatever the number is, the transfer itself looks spectacular. Color appears strong and unfaded, with both Russell’s red hair and the Hawaiian exteriors looking particularly beautiful. Sharpness and clarity is consistent with the look of CinemaScope lenses of the time period, which is to say, plenty sharp and plenty detailed, but perhaps ever so slightly less so than a more modern production might be. Film grain is unobtrusive and natural looking. Fox and Twilight Time have released some absolutely fantastic looking CinemaScope titles this year, and The Revolt of Mamie Stover belongs with the best of them.

The Twilight Time disc presents two audio options, both in the lossless DTS-HD MA format: a 5.1 surround track and a 2.0 stereo track. The 5.1 option is the preferred choice here, as it preserves the film’s directional dialogue while also allowing Hugo Friedholer’s score to shine. Dialogue is well-recorded and easy to discern in the mix. There are no issues whatsoever with hiss, pops, crackle or any other age-related artifacts. Simply put, The Revolt of Mamie Stover sounds as good as it looks.

Original Theatrical Trailer (2:29, SD) – The trailer is cropped and severely faded, which makes for a striking contrast to the new transfer of the actual film.

Booklet – Julie Kirgo’s insightful essay is complemented with a series of production stills and a reproduction of the original poster.

With its presentation of a strong female lead who has no qualms occupying the same grey areas that actors like Humphrey Bogart made a career out of, The Revolt of Mamie Stover is ahead of its time. Jane Russell excels in the title role, and director Raoul Walsh makes good use of a sturdy script, solid supporting cast and beautiful locations. This Twilight Time release, though light on extras, features a fantastic new 4K transfer which looks and sounds absolutely beautiful. For fans of Walsh, Russell and early CinemaScope, this is an easy title to recommend. 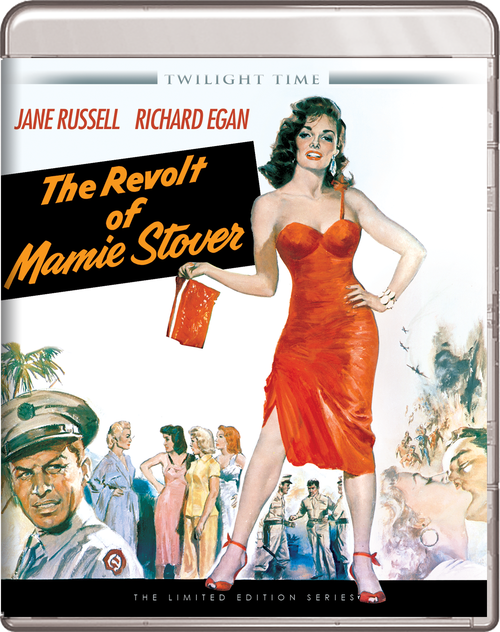