Meant to be a satire on the 1960’s pop culture phenomenon that was Swinging London, Smashing Time is an odd cinematic concoction of satire, slapstick comedy, musical elements, and British New Wave sensibilities mixed in. The end result is something that’s not for all tastes, making it off-putting for those not tuned in to its eccentric sensibilities but a fun little romp for those willing to give it a chance. Previously released on DVD by Anchor Bay, Kino has picked up the film for its Blu-ray debut as part of the label’s Studio Classics line.

Arriving from the northern part of England, brash and flamboyant Yvonne (Lynn Redgrave) and her friend – the mousy and more reserved Brenda (Rita Tushingham) – set their sights on carving out a path to success in London – namely making it big in show business. However, their path takes more than a few twists and turns at first, bouncing from one job to another and causing some outlandish chaos in the process. When Yvonne manages to come across some money by being a contestant on a comedy TV show, she invests it in becoming famous as a recording star – which she does, causing a rift in her friendship with Brenda. When Brenda strikes out on her own and becomes famous as a model as Yvonne’s popularity stagnates, it leads to a climax at a party in the BT Tower that’ll leave London – and the mod scene – limping rather than swinging.

Coming in to theaters right as the Swinging London phenomenon had run its course, Smashing Time is a film that may have come a day late and a dollar (or pound) short of what it ultimately tries to accomplish, yet it still manages to hit enough of its targets to make it a small cult film. George Melly’s script does manage to have the British New Wave trope of the working class girls trying to make it in the big city, but that’s turned on its head through a series of vignettes that combine kitchen sink realism with a broad slapstick quality similar to Laurel and Hardy. Director Desmond Davis (who had worked with both of his leading ladies on the earlier Girl with Green Eyes in 1964 and would later go on to direct the original Clash of the Titans in 1981) manages to lend a style that’s befitting for Carnaby Street, though pacing tends to waver from time to time; the decision to have the characters thoughts sung like songs is a very odd choice – it’s far from the quality that both Jacques Demy and Michel Legrand demonstrated so memorably with The Umbrellas of Cherbourg (1964). Finally, the slapstick sequences are indeed funny but not quite the laugh out loud level one would expect from the type, although the custard pie fight sequence at Sweeney Todd’s comes very close. With late timing of release, coupled with wavering qualities, it’s understandable why audiences didn’t really turn out for this during its initial release.

Performance wise, both of the leading ladies – veterans of the British New Wave – help anchor the film and keep it interesting for most viewers. Coming just a year after garnering an Oscar nomination for playing the eponymous Georgy Girl, Lynn Redgrave effectively plays against type as the brassy Yvonne, dead set on becoming famous no matter what the cost. Rita Tushingham, perhaps one of the main faces of the British New Wave that propelled her to fame, plays it straight compared to Redgrave, essentially making her the Laurel to Redgrave’s Hardy here. The fact that both play off each other so well makes their performances one of the strongest points of the movie. As the superficial photographer caught between these two characters, Michael York makes the most of a mostly underwritten part. Other memorable appearances include Ian Carmichael as a sleazy patron of the bar the girls work at and a recipient of pratfalls including a laxative spiked drink and an supercharged bubble bath solution, Arthur Mullard as the greasy spoon cafe owner caught up in a epic food fight, Hammer Horror stalwarts Veronica Carlson and Valerie Leon in small parts, character actor Sydney Bromley as a tramp, and Irene Handl as the secondhand store owner who furnishes Brenda with new clothes.

Taken from a raw 4K scan of the original film elements, the Blu-ray transfer faithfully captures Manny Wynn’s on-location camerawork beautifully and probably represents the best the movie has looked on home video. Grain structure is sturdy throughout, colors are strong with even skin tones and inky blacks, and fine details are captured with minimal instances of scratches, speckling, tears, dirt, and dust.

The original mono soundtrack is presented on a DTS-HD Master Audio track on the Blu-ray. Dialogue is clear and strong and John Addison’s lighthearted score is given strong ambiance with minimal instances of crackling, popping or hissing; again, probably the best this movie has sounded on home video. English subtitles are also available.

Audio Commentary by Kat Ellinger – The commentary offers up some information on the film and its cast, but also tries to frame it in the bigger picture of the British New Wave. Interesting, if a bit disjointed in terms of how the information is presented.

Bonus KLSC Trailers – The Knack… and How to Get It, Modesty Blaise, The Bed Sitting Room, and Billion Dollar Brain

For all it faults, Smashing Time is still an enjoyable little movie, warts and all, that acts like a time capsule of an era that’s long gone by. Kino’s Blu-ray release is a solid offering with high marks in video and audio quality, making this an easy upgrade over the previous Anchor Bay DVD. However, this movie may not be for all tastes, so your enjoyment might vary from this reviewer’s!

I like this live action cartoon of a film. I had the Anchor Bay DVD which wasn't anamorphic, but looked very nice & colourful. I'll hang on for a while & see if this gets a release in the UK. The unusual thing about this film is that it was made when it was all happening (1968) & not years later (Austin Powers).
Last edited: Sep 4, 2018
You must log in or register to reply here.
Share:
Facebook Twitter Reddit Pinterest Tumblr WhatsApp Email Link 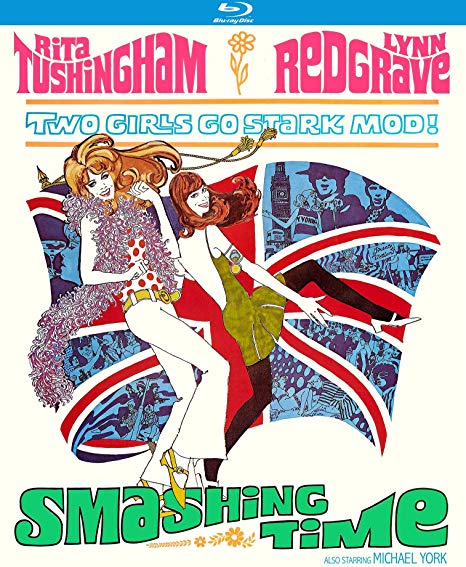