Twin Peaks was, and remains, a singular television experience. Launching into the pop culture psyche with a provocative mystery, woven into a backdrop of offbeat characters with secrets connected to secrets, and shadows crawling across even the most innocent of town inhabitants. It introduced elements that, week to week became embedded into our memories. Words and phrases like “Killer Bob,” “One-eyed Jacks,” “Damn good coffee,” and “The owls are not what they seem,” among others, hit the vernacular and, for many of us fans since day one, stuck.This new set from CBS and Paramount accomplishes what many thought was impossible, a high definition presentation of the entire series, featuring both the original and ‘closed-ended’ international pilot, partnered with the cinematic prequel (a New Line release licensed to different companies around the world,) and nearly an hour and a half of deleted scenes from the film. A treasure trove of joy wrapped in a neat package, for a (relatively) reasonable price that should attract new audiences and satisfy and reward the loyal fans. 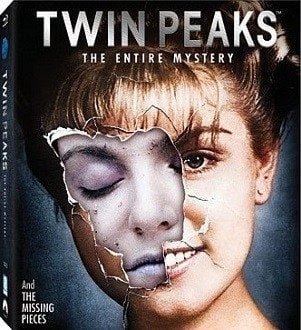 “She said people try to be good but they're really sick and rotten, her most of all, and every time she tried to make the world a better place, something terrible came up inside her and pulled her back down into hell. Took her deeper and deeper into the blackest nightmare. Every time it got harder to go back up to the light”

Twin Peaks is a revelation on Blu-ray. Superb detail complimented by rich colors, unfazed black levels and deliciously saturated throughout, are partnered with a good display of natural flesh tones and strong contrast.Filmed with Panaflex cameras, Panavision lenses, in 35mm, Twin Peaks always had the detail to look extraordinary. With the advent of high definition home media, we can finally see all of the meticulous detail, rich, warm colors, and crisp beauty of the Pacific Northwest (or at least the stages and locations in California created to look like the Pacific Northwest.)It’s original run on television, pre-high definition, robbed the viewing experience of the original filmed quality and even the two DVD set releases couldn’t come close to what we can now behold in CBS/Paramount’s Blu-ray release. A few shots, clearly where the filmed source was not available when this set was being prepared (missing, damaged,) are noticeably soft, but these are considerably rare and given how sharp and wonderful the rest of the series looks, these brief moments are forgivable.Twin Peaks: Fire Walk With Me doesn’t quite achieve the heights of the series, but it’s a fine transfer nonetheless, with good detail and an appropriate balance of color.

Featuring a DTS-HD Master Audio 7.1 soundtrack, as well as the original English stereo 2.0, Twin Peaks sounds delicious in this new set. The audio is impressively full, taking advantage of every iota of atmospheric mood, whispering wind through the trees, and the brooding electronics and snapping fingers, toe-tapping jazz of Angelo Badalamenti’s iconic score.Good use of the surrounds are made, balanced without issue with the dialogue rich in the center channel. Owl cries, motorcycle growls, and the many instances of characters screaming (either another character’s name or out in grief and pain) pierce the speakers, dramatically speaking, and sound first-rate.A few reports of some lip-synch issues have come out, likely from ADR/source issues than this transfer. None were noticeable enough to report here during my binge-viewing for this review, but those more sensitive to these things will likely spot the few occasions.

A delightful array of special features, many upgraded from standard definition to HD (such as the more recently recorded Log lady intros) are good, but the pièce de résistance has to be the wealth of ‘missing pieces,’ almost 90 minutes worth of deleted and extended scenes from Twin Peaks: Fire Walk With Me. Several new documentary extras with interviews with principle cast and crew, deleted scenes from select episodes and outtakes round out the core of the offerings.The concentration of special features can be found on discs 3, 5, 8, 9 and 10 with a little something on each of the 10 discs. There is plenty to reabsorb yourself into the world behind Twin Peaks, and a pleasing involvement of cast and crew sharing their experiences, and hearing David Lynch talk about, well, anything, is always a hoot.During the creation of this set, Ken Ross (EVP of CBS Home Entertainment) recalled at this year’s Comic-Con of learning of the volume of ‘missing pieces’ during a phone conversation with Director David Lynch:

Twin Peaks is one of the finest television series to have ever aired, no doubt about it. And the lure and power of the show hasn’t aged a day since its original broadcast nearly 25 years ago. The impact on the television landscape has been ineradicable, immediately present in The X-Files, but found in countless cinematically strong television productions since. Imitators made an appearance, the most obvious being 1993’s Wild Palms, but the influence and impact of the show has seeped into network and cable productions over the years as viewers and fans joined the creative industry (the recent The Killing borrowing quite boldly, it should be noted) and allowed that influence to play out.The vivid world of Twin Peaks, with symbolism abounding, the alarming presence of the color red, and an unrepeatable mixture of chills, chuckles, mystery, malice, and dances of dialogue, has never looked better than this fantastic high definition presentation. Though completest will note several missing special features available on the previous, Definitive Gold Box release (I recommend taking a look at this stellar, comprehensive assessment by HTF regular TravisR (post #134) for a rundown,) it must be said that this new Blu-ray release is a dream for fans and the best way for the curious to become acquainted with what the rest of us have been praising all these years.Very Highly Recommended!

"since its original broadcast nearly 15 years ago"I think you mean nearly 25 years ago.

Seriously, though, a masterful review of a masterful project. Can't wait to get my hands on it.

As much as I've loved Twin Peaks, I only ever owned the closed-ended pilot on LD, and the Gold Box DVD set -- which I watched several months ago for the first time in years and I fell more in love with the series than ever.

I was wondering what, of the special features from earlier releases that aren't included on the Blu-ray set, are truly worth having? For a completist, of course, everything is. I know that. But I'm one who doesn't mind being a little selective. For instance, I see there were some commentaries on the first DVD set. I never heard those. Are they worth a little more shelf space?

I'm pretty sure Twin Peaks was originally in Dolby Surround, not mono

Charles Smith said:
I was wondering what, of the special features from earlier releases that aren't included on the Blu-ray set, are truly worth having? For a completist, of course, everything is. I know that. But I'm one who doesn't mind being a little selective. For instance, I see there were some commentaries on the first DVD set. I never heard those. Are they worth a little more shelf space?
Click to expand...

The SNL stuff is fun to see and the commercials have some minor historical interest but as a huge Twin Peaks fan, I think the commentaries are a loss. In all fairness, how many times can someone listen to a commentary but looking at eBay, S1 can be had for about $10 and in my opinion, it's easily worth the $10 to have them.

Thanks. And they're only on S1, right?

Charles Smith said:
Thanks. And they're only on S1, right?
Click to expand...

Call me a conspiracy theorist but I'm thinking that since everything else from the S1 set is ported over, David Lynch's well-known commentaryphobia is what kept them from being on this set.

Travis, you're persuasive ...If I pick up the Gold Box, will I get the commentaries?

Dave B Ferris said:
If I pick up the Gold Box, will I get the commentaries?
Click to expand...

Nope, the S1 DVD set is the only place to get them.

Hmm, naturally, the set that is out of print!Thanks for the answer.

Dave B Ferris said:
Hmm, naturally, the set that is out of print!Thanks for the answer.
Click to expand...

It can be found pretty inexpensively on eBay or Amazon used from third party sellers - probably for about ten bucks. Fortunately it's not like one of those out-of-print titles that skyrockets in price.

Got the Blu-ray, and now I have my ten dollar copy of the Season 1 DVD set, my Gold Box set, and I still have the international pilot laserdisc.

If I were going to be a Twin Peaks completist in the physical sense, I would long ago have acquired the other LDs and DVDs, but shelf space and common sense demand that I admire others' collections from afar, and limit my completist holdings to actual content. This will consist of the Blu-ray box and the necessary DVD discs from the other sets -- namely, the four Season 1 DVDs, and disc 10 from the Gold Box.

I'll scavenge or purchase a 5-disc case to sit compactly alongside the Blu-ray box. All the rest of this lovely detritus will go into the giveaway box (and in the case of the Season 1 set packaging, which was rather worn, the trash can). The FWWM DVD will also be given away, as this completist can live without the creamed corn loop.

Has anyone else noticed popping noises throughout Episode 28? The first one is during the opening credits, not too long after the smokestack appears. I thought it was a setup issue, but it happens at the same point every time I hear it. It is only on the DTS-MA track.
You must log in or register to reply here.