And the procession of WWE-produced made-for-home video action films continues with The Marine 4: Moving Target. It’s pretty much what you expect once the basic plot is set up: it’s the millionth variation of “The Most Dangerous Game” with some Terminator thrown in for good measure. For action fans, it’s an adequate display of firepower and civilian combat maneuvers, but that’s basically all that it is with characterization and plotting coming up painfully short. 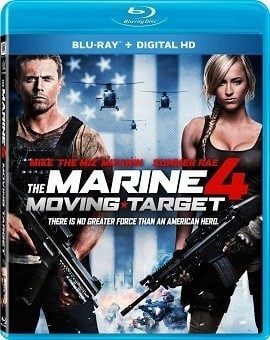 After retiring from the USMC, newly hired member of the Global Security Company Jake Carter (Mike 'The Miz' Mizanin) is one of the assigned team members guarding Olivia Tanis (Melissa Roxburgh) who has damning evidence concerning substandard military equipment against the Genesis Defense Corporation. To shut her up, Genesis has sent a private militia unit headed by Andrew Vogel (Josh Blacker) in the event the mole inside Global doesn’t get the job done ahead of time. When their initial strike fails to take out Olivia and Jake (the only survivors of the attack), the two find themselves on the run vastly outmanned and with the bare minimum of weaponry.

The script by Alan B. McElroy features cookie cutter conflict at every turn: Olivia naturally resists all attempts to help her, disregards orders that could save her life, and twice turns on Jake almost costing him his life. There are three major action set pieces that involve immense firepower, a tremendous amount of visceral carnage, and fairly predictable results: the people on the side of the heroes get wiped out utterly while the bad guys lose a team member here or there but manage to retain a large number of villains stalking their prey into the climax: an overextended deep forest cat and mouse hunt that is a poor man’s Rambo in terms of the unimaginative booby traps Jake constructs to take out the opposing team. To the filmmakers’ credit, time has obviously been taken choreographing the hand-to-hand combat scenes which dot the movie (much more interesting than the interminable wide spray of machine gun fire that most of the movie features), and whether Mike Mizanin is fighting one of the nameless thugs, his WWE colleague Summer Rae playing the only female member of this tough private military unit, or Josh Blacker’s strong and heartless Andrew Vogel, the blows look powerful and lethal. (Of course, this movie like so many other action films today also minimizes the damage slamming someone through a table or smashing a glass pitcher over his head would have; these moves don’t even produce bruises much less substantial loss of blood or broken bones: a silly, sad cliché of the genre).

Mike 'The Miz' Mizanin (he’s billed with his WWE Superstar name intact) is reprising the role of Jake Carter that he played in The Marine 3, and after years on television and in big arenas around the world, he’s perfectly at ease and natural before the camera, and his physicality does make him tailor-made for this kind of action filmmaking. Melissa Roxburgh’s Olivia Tanis does undergo some growth during the film beginning as a petulant, mistrustful brat who's very hard to like and eventually managing to hold her own when things get really bad. Josh Blacker and Matthew MacCaull as the two major villains of the piece are both certainly one-note characters, but they both revel in their treachery and make most entertaining monsters. Summer Rae holds her own physically though her character is mostly a cipher, simply a female killing machine.

The movie is framed for home video in the 1.78:1 aspect ratio and is presented in 1080p using the AVC codec. Sharpness is excellent throughout, and apart from some slight shimmer in foliage and only adequate black levels on occasion, the picture is pristine. Color is very rich (the early morning scenes in the forest are quite breathtaking if somewhat digital looking) with believable skin tones. The movie has been divided into 28 chapters.

On a made-for-home video budget, the DTS-HD Master Audio 5.1 sound mix is very impressive. Dialogue is always easy to understand even during the height of the firestorm of bullets and has been placed in the center channel. Split effects often pan through the soundstage as vehicles come toward or go away from the camera, and the gunfire pings all over the place with precision. Jeff Tymoschuk’s synthesized music score gets a nice spread through the fronts and rears.

Firepower (10:12, HD): the film’s armorer Rob Fourmier discusses the variety of weaponry used in the film, and along with the film’s prop master and best boy, the training and special effects used in the picture are shown in behind-the-scenes footage. Stars Mike Mizanin, Summer Rae, Melissa Roxburgh, and Josh Blacker also weigh in on their training and choreography for the movie.

The Franchise (5:48, HD): brief clips from the previous entries in the series starring John Cena and Ted Debiase are shown before Mike Mizanin expresses his hope that his training and attention to detail will do the Marine Corps.proud.

Beauty Is Dangerous (4:14, HD): the film’s two female leads Melissa Roxburgh and Summer Rae talk about their interest in portraying strong female characters in the film. Mike Mizanin also comments on their work ethic to blend in seamlessly with their male counterparts.

Promo Trailers (HD): Taken 3, Bad Asses on the Bayou, Kingsman: The Secret Service, among others.

No worse than previous entries in The Marine series, this fourth entry does contain wall-to-wall action and chases even if the events are rather paint-by-the-numbers with very few surprises. The disc certainly has outstanding video and audio quality for a made-for-home video release, so kudos for taking the time to offer quality to fans of this predictable genre material.