Perhaps the finest family adventure film ever turned out by Walt Disney, Swiss Family Robinson takes only a few of the basics from the original novel by Johann Wyss and instead constructs its own devilishly entertaining tale of survival populating it with a raft of interesting people, animals, and conflicts of every description. Though over two hours, the film doesn’t drag and is so packed with content that repeated viewings yield even greater pleasures. 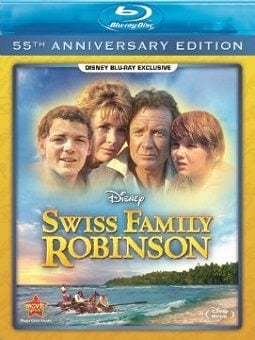 Leaving behind their Swiss home with Napoleonic wars raging all around for a new start in New Guinea, the Robinson family is left stranded in a sinking vessel during a tropical storm which forces the crew to abandon it after the ship they were traveling on was being chased by pirates. Left are the father (John Mills) and mother (Dorothy McGuire) along with their three sons: man-of-action Fritz (James MacArthur), man of intellect Ernst (Tommy Kirk) and mischievous younger brother Francis (Kevin Corcoran). Encountering all kinds of wild animals from tigers to elephants to zebras and many different kinds of terrain, the family carves out a pleasant life for themselves but is always fearful of the return of the pirates led by the bloodthirsty Kuala (Sessue Hayakawa). When Fritz and Ernst take off in a makeshift skiff to circumnavigate the island, they run into the pirates who have Captain Moreland (Cecil Parker) and his disguised-as-a-boy daughter Roberta (Janet Munro) tied up. The boys are able to rescue her and bring her back home but not without a serious sibling rivalry springing up between the brothers for the lady’s hand.

Lowell S. Hawley’s screenplay is filled with incident and with the tropical island of Tobago offering real-life locations of majestic beauty and tantalizing mystery, it was a wise idea for Disney to abandon the original book and concoct its own plot (the book covers a period of over ten years; the movie covers maybe a year), and though the string of adventures eventually comes to a final showdown with the pirates that’s been building from very early in the movie, most of the movie concerns the work and the play that the survivors make for themselves on the island. The astounding treehouse that they construct is such a fascinating construct (reminiscent of the treehouse Tarzan eventually builds for Jane in MGM’s film series), and the games they play together as a family, whether they be swinging on vines across a deep pool, skidding down waterfalls, or a climactic race with all of the island’s wild animals (Ernst on an ostrich, Francis on his baby elephant, Fritz on a burro, Roberta on a zebra) are completely entertaining. The dangers with tigers, a particularly nasty anaconda, and some malicious hyenas also keep pulses racing and the entertainment quotient high. And nothing beats the series of safeguards and booby traps the family builds to protect themselves during the final onslaught by the pirates. If perhaps the sibling rivalry for the affections of Roberta goes on a bit long, especially when it’s very obvious early-on which one she prefers, it’s the movie’s only slight stumble. Director Ken Annakin captures the beauties and the dangers of this paradise in glorious widescreen splendor and uses every inch of the frame to make sure all of the physical effort of survival isn’t seen as just a lark. It’s obviously hard work, and it looks it.

John Mills anchors the picture as the elder Robinson, feet planted firmly on the soil and determined to survive no matter what. Dorothy McGuire adds another deeply caring mother portrait to her portfolio, and both James MacArthur and Tommy Kirk excel as the two older brothers. Janet Munro makes just about the least convincing boy imaginable during her early scenes in disguise but blossoms later in the movie when she can be herself. Kevin Corcoran is the all-boy, all-the-time character that he played in many Disney projects in this period. Sessue Hayakawa makes a most threatening and treacherous-looking Asian pirate with Milton Reid and Larry Taylor as other notable brigands. Cecil Parker has a couple of noteworthy scenes as the wealthy English captain whom the pirates could use for ransom.

The film’s original Panavision aspect ratio of 2.35:1 is faithfully rendered in this 1080p transfer using the AVC codec. Sharpness is outstanding for most of the film, and color and brightness are much superior to the Vault Disney special edition release on DVD. Flesh tones are true, and color is almost always under control with only one brief moment of color pulsing witnessed. Contrast is much more consistent in this transfer than on the DVD. The movie has been divided into 18 chapters.

There is no lossless sound mix offered here. Instead, the Blu-ray features a midrange bitrate Dolby Digital 2.0 sound mix which Dolby Prologic decodes into the center channel. The dialogue (almost all of which had to be post synched after the film’s completion) sounds amazingly natural and does not fight for recognition with the background score of William Alwyn or the atmospheric effects of the island location with the sea, the wind, and the many animal sounds which predominate. No age-related artifacts like hiss or crackle are present to mar the listening experience.

There are no bonus features offered on this specialty Blu-ray disc.

A terrifically entertaining adventure tale for the whole family, Swiss Family Robinson makes a beautiful high definition disc. The audio commentary and other bonus features on the Vault Disney DVD release are much missed, but if the movie is all you’re interested in, it receives a very good rendering here. This movie is offered as part of the Disney Movie Club (www.DisneyMovieClub.com) though you can certainly find it offered for sale with varying premium prices at Amazon (see below) and through other marketplace sellers. Recommended!

Again the lack of extras on these discs is woeful. Disney lovingly assembled the bonuses for their original Vault Disney DVD releases and it's not fair that the Blu-ray (a trade above) is actually a trade lower considering it doesn't offer the full package.


Unfortunately, I see myself doing what I did with some MGM films, where the DVD had supplements (e.g. commentary track) missing on the Blu-ray.


I will get this eventually. I joined the DMC many months ago now, and I can say it was a good decision.


Thanks again for the review!

All the Amazon listings for this release are third-party because it's a Disney Movie Club exclusive.

Okay, so how much is it at the Disney Club? With none of the DVD special features, it's really just another Disney cash-grab.

theonemacduff said:
Okay, so how much is it at the Disney Club? With none of the DVD special features, it's really just another Disney cash-grab.
Click to expand...

Sony can provide extras for its family films on Blu-ray at a similar price point.

theonemacduff said:
Okay, so how much is it at the Disney Club? With none of the DVD special features, it's really just another Disney cash-grab.
Click to expand...

Without buying anything else it's $24.95 so far all the DMC bluray exclusives have been priced the same.

With current "B1 G40/50% off the rest of your order with Free Shipping" it would be 12.48/14.97 (without prorating your full price item) depending on whether you are fulfilled member (VIP).
If you are enrolling for the first time with the best promo codes it could be as little at $8 if you average your 8 or 9 movie group.

I got mine for less than $12 and just made my own combo pack with the old DVD. For the upgraded presentation it would easily have been worth full price.

I considered (still am) joining DMC just to get this. Problem is, I have all the "Disney" titles I want that they offer in joining up, except three including this one. I could stretch it to several I guess, but let's face it, like for most addicts here I don't wait too long to get my "fix", and the "several" are not even close to priority nor on my very long "wish lists".


Which means I may have trouble finding 5 new titles in the next 2 years, which seems to be the join-up offer in Canada. Anybody have some info/link to upcoming Disney titles, especially the exclusives? I am pretty aware of the Marvel titles I could expect in the next couple years, so not just those. Thanks.


And now I sort of kick myself for not joining sooner. Well, not really. But when you clearly see on the DMC site exactly which of all the BDs you bought are "Disney", at least now they are, it does make you pause.

CraigF said:
Which means I may have trouble finding 5 new titles in the next 2 years, which seems to be the join-up offer in Canada. Anybody have some info/link to upcoming Disney titles, especially the exclusives? I am pretty aware of the Marvel titles I could expect in the next couple years, so not just those. Thanks.
Click to expand...

As I understand it Mickey Mouse Blanket, get 5 intially for $2 with 3 commitments to purchase. 6th is 14.95 and counts as 1st commitment, 7th is 9.95 and isn't a commitment
and you only have to buy 2 more in 2 years to fulfill. Now I'm still reading the T&C saying there are 4 total commits, but 3 different Canadians have told me
that they only had 2 more to buy after their enrollment.

Upcoming I'd think by Dec/Jan at worst -- Ant-man, Avengers Ultron, Inside Out, CInderella, Tomorrowland, Aladdin. Pinocchio is
rumored to be coming in Spring 2016. The upcoming Exclusives though those aren't supposed to count as commitments several folks say theirs did. Even is it is 3 additional I wouldn't think that would be too hard in 24 months. You could always buy something and gift it or sell it -- you just have to remind yourself of the prorated deal price of the 8-9 Movie Bundle which is really the important thing and not the full price you pay for commitments. The commitments are no more $30 than the 1st 5 enrollments were $0.40ea


There should be at least one more set of Ghiblis by the end of the year though there aren't many left.
Pretty much if you need 3D movies those aren;t usually allowed at enrollment over the phone, but occasionally people get a couple
approved and they should always count as commits.

You can talk directly to some folks in the Canadian subforum DMC thread @ Bluray.com (Deals Forum)

^ Thanks. I have already done what you suggested too, a couple days ago. Sorry about the DMC thing, but this title and DMC are pretty much inextricably linked at this point, practically speaking (OK, really "cheapskate-speaking").
You must log in or register to reply here.

Monday at 4:17 AM
Robert Crawford