There are lots of beautiful people and plenty of exquisite Grecian locations in Randal Kleiser’s Summer Lovers, but unless one is only interested in people watching, there’s nothing much of substance in this pea-brained excursion into a modern ménage à trois. Feeble dialogue, amateurish acting from at least one of the principals, and a story that goes nowhere all drag down the movie which, if the point was in attempting to make a 1980’s stab at a Jules et Jim retread, never comes close to the mark. 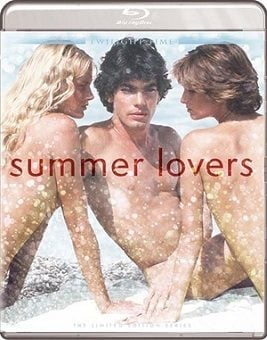 Together for five years, happy couple Michael Pappas (Peter Gallagher) and Cathy Featherstone (Daryl Hannah) plan to spend eight glorious weeks exploring the Greek islands of Santorini, Mikonos, Crete, and Delos, enjoying the freedoms of optional clothing and sexual experimentation without anyone from home being any the wiser. But Michael almost immediately catches sight of a lovely, enigmatic French girl Lina (Valerie Quennessen) who’s in Santorini working on an archeological dig. He spends the day with her making love and returns to a bitterly disappointed and jealous Cathy who doesn’t understand why he needs anyone other than her, but after meeting Lina and getting to know and like her, she quickly comes around to welcoming Lina to share their bungalow and, more expressly, Michael in bed. They spend an idyllic five weeks together until a local man Jan Tolin (Hans Van Tongeren) captures Lina’s attention and she spends days with him disappointing and frustrating both Michael and Cathy.

While writer-director Randal Kleiser has peopled his film with an avalanche of gorgeous players and extras (and shoots many of them either topless or completely in the raw) and makes sure that the glories of these Greek isles (of both the natural and human variety) are captured in ravishing color, his story and screenplay could not be any less developed or psychologically attuned. When and how does Cathy come around to sharing her boy friend when she had been so distraught one scene earlier at his infidelity? Why does Lina have no friends on Santorini except these two rather uninteresting and frankly dull playmates? Why do these two stubbornly uptight Americans fail to understand Lina’s need for freedom and lack of inhibitions if they claim to know her so well? Obviously, the director wants to be provocative (a three-way!) without actually being provocative (we see no lovemaking in progress so it’s not quite clear if Michael shares the two women only or if the women are involved with each other as well as Michael), his only meager stabs at anything controversial involving some fleeting full frontal nudity and a sloppily conceived and shot couple of scenes with a film crew shooting in Greece featuring a drag queen (Carlos Rodriguez) who comes on to Michael.

Valerie Quennessen is unquestionably the most interesting of the three leading players, both with her character and with her performance. The script lets her down, of course; Lina is no better developed than the two American characters, but at least Ms. Quennessen invests in Lina some fetching and appealing colors to her personality, a sort of sub-Jeanne Moreau in mood and mystique. Michael and Cathy are such dull dolts that the inexperienced Peter Gallagher and Daryl Hannah can do nothing to relieve them of their tedium as focal characters in the narrative. At least Gallagher’s line readings are sound; Ms. Hannah’s greenness with delivering dialogue is really telling in her giving a very amateurish performance. In the film’s final third, Cathy’s mother pays a surprise visit with her friend in tow, Mrs. Featherstone played by Barbara Rush and her friend by Carole Cook. While the writer-director is desperately hoping their wide-eyed astonishment at the kids’ living arrangements will generate a few nervous laughs and squirms to give the film a lift, it falls as flat as the remainder of the movie: in all, a beautiful package with nearly empty insides.

The film has been framed at its theatrical 1.85:1 and is presented in 1080p resolution using the AVC codec. Sharpness is usually very good though there are soft shots here and there throughout the movie. Color, though, is quite solid and striking with luscious skin tones. Contrast has been consistently administered to generate an extremely pleasing picture. The movie has been divided into 24 chapters.

The DTS-HD Master Audio 2.0 stereo sound mix offers the almost incessant succession of pop and disco hits on the soundtrack a nice framework for full enjoyment. The dialogue seems a little underpowered in the mix occasionally at odds with the music (some background score is provided by the award-winning Basil Poledouris) and atmospheric effects. There are no problems with artifacts like hiss or crackle, however.

Audio Commentary: writer-director Randal Kleiser provides the commentary, an interesting amount of background information on the production of the film from conception through execution.

Basil Poledouris: His Life and Music (48:13, SD): a heartfelt 1997 documentary on the late Emmy-winning composer who discusses (along with his wife Bobbi) some of his successes like Starship Troopers, Conan the Barbarian, Free Willy, and Lonesome Dove.

Theatrical Trailers (2:28, 2:06, HD): the first is a general audience trailer and the second is a red band trailer.

If it’s people watching you want, Summer Lovers provides those in great abundance, but this romantic comedy-drama saddled with some uninteresting and underdeveloped characters really doesn’t hold much of interest apart from the glorious locations. Still, if you’re fascinated by that or with the stars, there are only 3,000 copies of this Blu-ray available. Those interested should go to www.screenarchives.com to see if product is still in stock. Information about the movie can also be found via their website at www.twilighttimemovies.com or via Facebook at www.facebook.com/twilighttimemovies.

Now where is that NOT like this icon? Oh ... there isn't one.

You nailed it, Matt!

We've experienced many a "Lina"...(and yes, that is the one aspect that falls short)

Saturday at 4:30 PM
Will Krupp