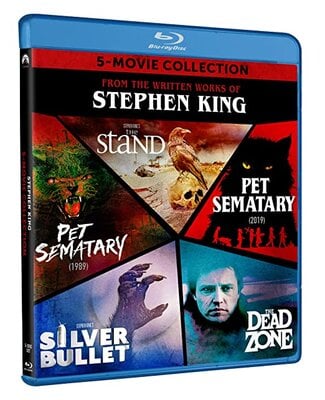 I think the US Blu debut of The Dead Zone deserves more hoopla than it's getting here.
Reactions: TravisR, dpippel and battlebeast Written for the screen by Stephen King and based on his iconic bestseller, director Mary Lambert’s thrilling Pet Sematary electrified audiences upon its release. When tragedy strikes, a grief-stricken father sets off a perilous chain of events that unleashes unfathomable evil in this horror classic. The Pet Sematary (1989) Blu-ray includes commentary by Lambert, a guided tour of the locations led by King, an introduction to the cast and characters, a behind-the-scenes look at the making of the film, an interview with Lambert about her memories making the film 30 years later, interviews with cast and crew of the 2019 movie discussing the original film’s impact, and photo galleries.

Called “the stuff of nightmares” (Rolling Stone) and “a creepy masterpiece” (Coming Soon), Pet Sematary (2019) delivers a bone-chilling thrill ride. The Blu-ray boasts over 90 minutes of special features, including hair-raising deleted and extended scenes, a chilling alternate ending, a look at the main characters, behind-the-scenes footage, cast interviews, and more.

Adapted by Stephen King from his acclaimed novel and directed by Mick Garris, this epic story of good vs. evil unfolds as the few remaining people on Earth fight to survive after a deadly plague kills most of the world’s population. The gripping, postapocalyptic tale stars Gary Sinise, Molly Ringwald, Jamey Sheridan, Laura San Giacomo, and Rob Lowe. The Blu-ray includes commentary by King and members of the cast and crew, along with a making-of featurette.

Director David Cronenberg delivers a taut psychological thriller with the story of Johnny Smith, a schoolteacher who awakens from a coma to discover he has psychic abilities. Christopher Walken gives a powerful and rich performance as Smith, whose burden is both frightening and moving. The film also stars Brooke Adams, Tom Skerritt, Herbert Lom, Anthony Zerbe, Colleen Dewhurst, Nicolas Campell, and Martin Sheen.

Stephen King wrote the screenplay for this film based on his novella “Cycle of the Werewolf.” When a series of brutal killings plague a small town, a paraplegic boy becomes convinced they are the work of a werewolf. Celebrating its 35th anniversary this year, the film stars Gary Busey, Everett McGill, and Corey Haim.

Bob Cashill said:
I think the US Blu debut of The Dead Zone deserves more hoopla than it's getting here.
Click to expand...

I'd be happier if I wasn't being forced to also pay for 4 other movies that I either have or don't care about.
Reactions: Joe Bernardi and Bob Cashill

TravisR said:
I'd be happier if I wasn't being forced to also pay for 4 other movies that I either have or don't care about.
Click to expand...

It's available in HD via streaming if you don't want to spring for the additional entries on this release.
Reactions: TravisR

Dead Zone is likely the same mediocre transfer that was released in Australia and Europe.
Reactions: dpippel

More than likely. Too bad.