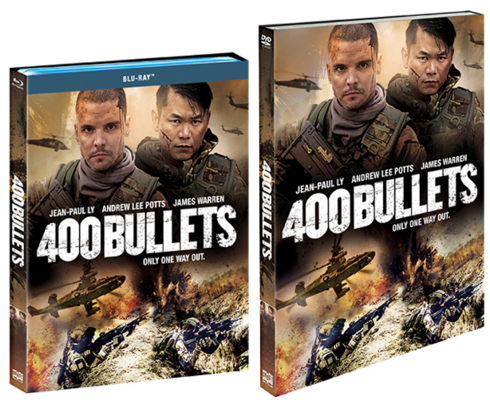 400 Bullets (2021) - Official Trailer (HD)
Get ready to jump into action this spring. Highly anticipated action feature 400 BULLETS, written and directed by Tom Paton (Black Ops, Redwood, Black Site), hits VOD, digital and national home entertainment shelves for watch-at-home on March 2, 2021 from Shout! Studios. An edge-of-your-seat, military actioner about what it means to fight for honor instead of profit, 400 BULLETS combines gun battles, epic hand-to-hand fight sequences and the banter of hardened soldiers into a lean, two-fisted film that packed with a wallop. The film boasts a stellar British cast of Jean-Paul Ly (Jailbreak, I Am Vengeance), Andrew Lee Potts (The Crown, Primeval, Alice in Wonderland), James Warren (The Gentlemen, King Arthur: Legend of the Sword), Adele Oni (The Witcher, Years and Years), Steve Blades (All the Devil’s Men, Recoil), and Wayne Gordon (Into the Badlands, Cinderella Man).

The collectible Blu-ray™ and DVD release boast a spectacular movie presentation with special bonus content, including commentary with writer/director Tom Paton and behind-the-scenes featurette. A must-have for action movie enthusiasts and collectors, 400 BULLETS will be available in stores at Walmart and other fine online retailers. Pre-order is available now at Shoutfactory.com


400 BULLETS | Movie Synopsis
One cold winter night in Afghanistan is about to get a whole lot worse for Rana Rae (Jean-Paul Ly), a Gurkha soldier left to guard a British military outpost, when Captain Noah Brandt (Andrew Lee Potts) arrives looking for refuge from a group of rogue special ops and a cell of heavily armed Taliban. The two soldiers must fight for their lives as they attempt to call for backup before the rogue squad, led by the backstabbing Sergeant Bartlett (James Warren), can hunt them down to retrieve a case of missile guidance chips that Noah intercepted. But Bartlett and his men do not count on Rana, whose ferocious Gurkha training makes him a force to be reckoned with. Rana and Noah, armed with only 400 bullets and the Gurkha's deadly weapon of choice – the kukri blade – must battle their way through multiple enemies in a brutal showdown to the death in the film's jaw-dropping finale.

Shout Select Press Release: All About The Benjamins (2002) (Blu-ray)