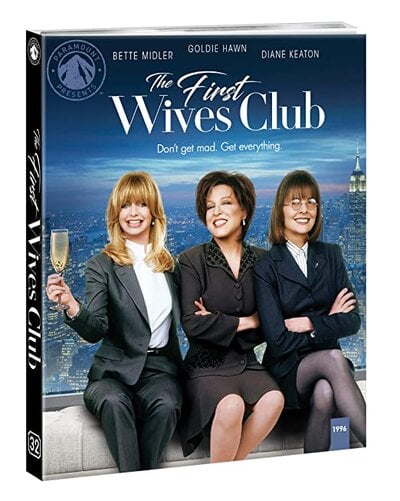 The hilarious comedy THE FIRST WIVES CLUB arrives on Blu-ray™ for the first time ever as part of the Paramount Presents line on June 28, 2022 from Paramount Home Entertainment!

Starring Bette Midler, Goldie Hawn, and Diane Keaton, the uproarious revenge comedy has been remastered from a 4K film transfer for this new release. The Paramount Presents Blu-ray includes collectible packaging with a foldout image of the film’s original theatrical poster, as well as a new Filmmaker Focus with screenwriter Robert Harling.

Loaded with snappy one-liners, great physical gags, and a healthy dose of satire, THE FIRST WIVES CLUB tells the story of three Manhattanites with more than a longtime friendship in common—they’ve all been dumped by their husbands for newer, curvier models. Determined to turn their pain into gain, justice isn’t about getting mad, it’s about getting everything.

So happy this gem is getting recognition through the Presents line- pre-ordered and looking forward to June!

I didn't like this movie when it came out in 1996 - I saw it on my Mum's recommendation! Then I rewatched it last year on Netflix, while I was in COVID-lockdown. Like many other adult-orientated films which came out in the '80's and '90's, which I didn't particularly care for at the time, I now found that I thoroughly enjoyed it. Definitely helps being middle-aged!

An odd choice; I saw it when it came out and couldn’t appreciate it (too young). If I see it again, maybe my opinion will change.

battlebeast said:
An odd choice; I saw it when it came out and couldn’t appreciate it (too young). If I see it again, maybe my opinion will change.
Click to expand...

"Foul Play" wasn't Paramount Presents. It was an older scan, with a more reasonable price point.

Not a criticism. Just a friendly correction. What ends up as a Paramount Presents and what doesn't can be befuddling. Why "Elizabethtown" and not "Reds", for example? Though unlike "Foul Play", "Reds" was given a new scan.

lark144 said:
Not a criticism. Just a friendly correction. What ends up as a Paramount Presents and what doesn't can be befuddling. Why "Elizabethtown" and not "Reds", for example? Though unlike "Foul Play", "Reds" was given a new scan.
Click to expand...

I noticed the press release left Stephen Collins' name off of the list of supporting players for obvious reasons I guess. Though if offended or disgusted by what he admitted he did, perhaps it should be known that he is in the movie.
Last edited: Jun 3, 2022

The First Wives Club is fondly remembered around my house. I somehow expected more from it when I saw it theatrically, but actually enjoyed it quite a lot upon renewed screenings at home.
Best scene in it, Hawn's Elise Elliott getting smashed at the bar after being offered to play the part of 'a mother' in her next movie, disgusted, shocked and incapable of recognizing her years as an ingenue in pictures has passed her by, and, telling the sympathetic bartender, "Is this the face of a mother? Angela Lansbury is Monique's mother. Shelley Winters is 'Unique's' mother. Sean Connery is Monique's mother. No. No. I take that back. Sean Connery is Monique's boyfriend. He may be 300 years old but he's still a stud!"

La-La Land Records is issuing the expanded soundtrack this month.