Mixing genres can be tricky, and in Phantom of the Paradise, writer-director Brian De Palma places the rock musical, horror, and black comedy genres in a blender and concocts an often trippy cross between Faust and Phantom of the Opera that did not connect with most moviegoers during its initial theatrical release in 1974, but has gathered a cult following over the 40 years since then. 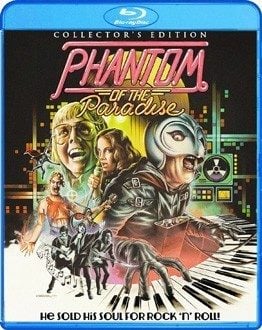 “He sold his soul for Rock ‘n Roll!”The tagline for Brian De Palma’s rock musical Phantom of the Paradise sums up the plot of this cult classic quite nicely. Record producer and manager Swan (Paul Williams) is looking for the next big thing to open his new club, The Paradise. During an intermission for Swan’s current hit band, The Juicy Fruits, Winslow Leach (William Finley) sneaks on stage and performs the first song of his cantata based on Faust. Swan loves it, and has his right hand man, Philbin (George Memmoli), talk Winslow into handing over copies of his cantata, promising that Swan will contact him if he’s interested. Winslow follows up one month later at the offices of Death Records, only to be thrown out on the streets. Not one to give up, Winslow arrives at Swan’s mansion, and finds several chorus girls auditioning with his song, including Phoenix (Jessica Harper). Trying to get rid of Winslow for good, Swan has him framed for trespassing and drug trafficking, and is given a life sentence. Upon hearing his song performed on the radio by The Juicy Fruits, Winslow goes berserk, breaks out of jail, and heads to the pressing plant of Death Records, hoping to destroy the press, but instead has his face disfigured in a freak accident. Now unable to speak, Winslow dons a black leather outfit with cape and a bird-like mask, and transforms into the Phantom. He begins to sabotage Swan’s productions (including an homage to the opening sequence to Orson Welles’ Touch of Evil), until Swan tries to call a truce by making a deal that Winslow’s music will only be performed by Phoenix, and has Winslow sign a contract (in blood), thus sealing the ultimate fate of both Winslow and Swan.Phantom of the Paradise was made between two of De Palma’s early Hitchcockian thrillers, Sisters (1973) and Obsession (1976), and although it seems like a rock musical would be an odd choice for the director, the film, as a whole, works splendidly as a hallucinatory look at the music industry and how it takes art, chews it up, and spits it out as pop. The look is very 1970s De Palma, utilizing split screens (which would become his trademark after the success of Carrie in 1976) and long single tracking shots (made popular in his later films Bonfire of the Vanities and Raising Cain). Paul Williams wrote all of the music for film (and received an Oscar nomination), which was a bit of a departure for him at the time, having written mostly pop and easy listening songs for The Carpenters and Three Dog Night while under contract at A&M Records. None of the songs are exactly catchy, with the notable exception of The Hell of It, which plays over the end credits (and on the disc’s main menu). The performances are notable, particularly Williams impish and darkly comic turn as Swan, De Palma favorite William Finley pulls off the near impossible by conveying the Phantom’s emotions with only the lower portion of his face and one eye behind the mask, and Jessica Harper shines (no pun intended) in her first starring role as Phoenix.

The 1080p AVC-encoded transfer (which retains the film’s 1.85:1 aspect ratio) provided to Scream! Factory is, in a word, breathtaking. Colors are vibrant and not over saturated, blacks are inky deep, contrast is superb, and contains excellent fine detail. Film grain is visible, but natural and non-obtrusive, with the exception of a few optically processed shots (typical of a film of this age).

The DTS-HD Master Audio 5.1 is the winner over the DTS-HD MA 2.0 stereo track. The stereo track has an issue where the dialogue will waver between the left and right channels, causing it to emit from all channels when playing back in Pro-Logic mode. The 5.1 directs most of the dialogue to the center channel, allowing to be heard more distinctly. The 5.1 also benefits from a boosted LFE track, providing a more robust lower end and giving a nice kick to the musical performances, with some occasional discrete surround effects.

Scream! Factory has managed to create some new bonus materials for this release, as well as port over a few from the Region B releases from Arrow and Opening Distribution, split over the Blu-ray feature disc and a DVD that is exclusively bonus features.Disc One (Blu-ray):Audio Commentary with Jessica Harper, Gerrit Graham, and the Juicy Fruits (Archie Hahn, Jeffrey Comanor, and Harold Oblong aka Peter Eibling): The stars reflect on their experiences working on the film, edited from three different commentary recording sessions, newly recorded for this release.Audio Commentary with Production Designer Jack Fisk: Fisk discusses creating the sets for this film on a very limited budget, newly recorded for this release.Brian De Palma: Backstage at the Paradise (1080p; 33:07): De Palma discusses, quite frankly, the creative process in developing this film, as well as some of the legal issues that came up during post production in this new interview.Paul Williams: Soul Inspiration (1080p; 34:54): In this new interview, Williams discusses how he became involved in the film and some of the inspiration behind the songs.Behind the Mask with Tom Burman (1080p; 4:09): Makeup effects artist Burman discusses the creation of the Phantom’s helmet.Alternate Takes (1080p; 26:21): Using split screens, eleven sequences from the film are shown with multiple camera angles along with the final, edited version in the lower right corner. The sequences include Alternate Title, Goodbye, Eddie, Goodbye, Sing Sing Box Escape, Death Records Pressing Plant, Special To Me, Beef Rehearsal, Beef Shower, Life At Last, Old Souls, Swan Mansion Rooftop, and Swan Wedding.Swan Song (Outtake Footage) (1080p; 7:27): During production, the name of Swan’s record company in the film was Swan Song. Unfortunately, at around the same time, Led Zeppelin launched their record company with the same name, and threatened to file a lawsuit against the producers. Swan’s label was changed to Death Records, and most references had to be replaced through awkward edits and last minute travelling mattes. The original Swan Song footage is presented here.Still Gallery (1080p; 13:50): A collection of posters, print ads, and production photos.Disc Two (DVD):Paradise Regained (480p; 50:10): Originally created for the French DVD and Blu-ray release, this is a fascinating documentary with most of the cast and crew, including director Brian De Palma, producer Edward R, Pressman, editor Paul Hirsch, William Finley, Paul Williams, Jessica Harper, Gerrit Graham, and Archie Hahn. Portions are in French with English subtitles.Interview with Paul Williams Moderated by Guillermo del Toro (408p; 72:16): Del Toro is a big fan of Williams, and the two have a fun, engaging conversation on the film and Williams’ career.Interview with Costume Designer Rosanna Norton (480i; 9:34): Norton discusses the costumes for the film in this very shaky interview shot with a consumer camcorder on December 9, 2004.Ed Pressman: Phantom Producer (480p; 19:03): The producer discusses how this became a pet project of his, and the constraints of working on a very low budget in this interview created for this release.In the Studio with Drummer Gary Mallaber (480p; 17:05): Mallaber discusses his career as drummer for Paul Williams and how he became a member of the Juicy Fruits in the film. NEW for this release.Alvin’s Art and Technique (480p; 11:36): Andrea Alvin, the widow of poster designer John Alvin, discusses his work on the movie’s poster and briefly discusses some of his other posters for films such as Blazing Saddles and The Color Purple. NEW for this release.Biography: Phantom of the Paradise (480p; 9:32): The 1974 publicity sheet written and read by Gerritt Graham. NEW for this release.William Finley and Toy (480i; 0:33): Finley demonstrates a talking action figure of the Phantom, suitable for ages 10 and up.Radio Spots (480p; 2:34): A collection of four radio ads for the film.TV Spots (480p; 5:19): A collection of five TV ads for the film, sourced from faded 16mm prints.Theatrical Trailers (480p; 5:07): Two trailers for the film.Still Gallery (480p; 2:38): More production photos from the film.Reversible Insert Cover: Choose between the new Scream! Factory artwork or artwork based on one of the film’s original posters.

I wonder if the Shout version looks like the Arrow release or the Opening release.

I can't rely on DVD Beaver screencaps for accuracy but assuming they did the job right for once then they are different.

I wish that DVDbeaver would add a review & screen caps of the new USA release (that is, add to the 2 European Blu-ray comparisons that is already on the DVDbeaver site).

While the screen caps issue is up to debate, it is an additional piece of information in making determination about quality.

I've already ordered this. Between this, Sorcerer and the HFPA BD of Stevie Wonder's Songs in the Key of Life, it'll be a 70s party at my house.
T

Phantom of the Paradise (1974) is an amazing film. I recently re-watched this on Blu - incredible.

This is a great rock opera/revenge fantasy re-telling of the "Faust" storyline & "Phantom of the Opera". I enjoyed the various incarnations of the "Juicy Fruits", .i.e. '50's pop/rock, '60's beach rock, '70's glam rock, etc. and thought the transition(s) were very well done. This actually reminded me of the various incarnations of the band Spinal Tap in that 1984 film, though of course Phantom pre-dated this by 10 years.

The actress Jessica Harper did a great job playing "Phoenix" - and though I usually don't like soft rock, I liked her vocals when she sung - superb voice.
Last edited: Feb 13, 2019

Such a classic. In my opinion, DePalma's best film, acknowledging his influences most directly, including the best send up of the shower scene from Psycho, and perfect satires of the musical genres of the day.

I went to a screening of this in Miami back in 1973 when it first opened and it had me from the Rod Serling narrated opening. The blu was a long time coming, but it was worth the wait.

I don't know if it's his best film, but it's certainly one of them. Regardless of its multiple inspirations, the film itself is entirely unique and special. From the first time I saw it, it became one of my favorites. Paul Williams doesn't get nearly the respect he deserves as a songwriter these days from the general public, but the man's talent is a true gift to those of us who love him. There's a reason he was made the head of ASCAP.

I also love his work on Bugsy Malone, another entirely unique and special film. One, sadly, that has never gotten a U.S. release on either DVD or Blu-ray. Thank goodness for the UK release and multi-region players.
You must log in or register to reply here.