The Victorian literary characters along with some other people newly invented for the show who inhabited Showtime’s Penny Dreadful during its popular first season are all back to thrill and titillate us once again in season two. In terms of character investigation and careful plotting, season two is far more complex and intricately structured, though those wanting thrill-a-minute surprises and lots of gore will likely be disappointed as those events happen only with thoughtful set-ups in a season that probes deeply beneath the skins of characters all with things to hide and sins to be faced. 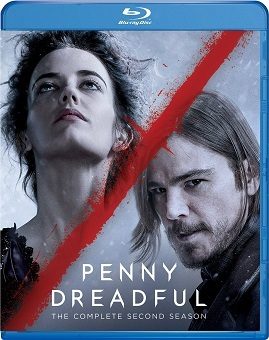 As we left our protagonists at the end of season one, Vanessa Ives (Eva Green) has exorcised the devil from within her, but old Beelzebub isn’t done with her by a long shot. He’s dispatched Evelyn Poole (Helen McCrory), a powerful immortal nightcomer (read: witch) with her three disciples, to subdue Vanessa and bring her to him. But Vanessa is housed in a veritable fortress under the protection of Sir Malcolm Murray (Timothy Dalton) and his protector Man Friday Sembene (Danny Sapani) along with American sharpshooter Ethan Chandler (Josh Hartnett). We learned last season that Ethan has escaped from America to start a new life in England because he’s a werewolf who at the end of season one goes on a murderous rampage under a full moon killing almost a dozen people. Scotland Yard Inspector Rusk (Douglas Hodge) suspects Chandler but as yet has no proof tying him to the killings. Elsewhere, Dr. Victor Frankenstein (Harry Treadaway) is tasked by his creature (this year named John Clare - Rory Kinnear) to bring last year’s dead prostitute Brona Croft (Billie Piper) back to life to be his mate. The new creation is renamed Lily and must be introduced to life once again through Victor’s auspices. On the periphery during much of the season is libertine Dorian Gray (Reeve Carney) still looking for amusements to distract him from his immortality and finding one with transvestite hooker Angelique (Jonny Beauchamp).

The intricate plan to trap Vanessa for the Devil takes the entire season involving a series of seductions by Mrs. Poole and a procession of spells cast to distract those protecting Miss Ives by forcing them to face their own weaknesses and insecurities. Ethan spends a portion of the season evading police arrest (though when Rusk finally learns Chandler’s real identity – “Ethan Chandler” is his stage name – it really shouldn’t come as much of a shock, at least for those familiar with Universal’s Wolf Man series of movies), while Dorian becomes more intimately involved with the core cast when he makes the acquaintance of Frankenstein’s Lily and grows into a consuming fancy with her. Victor Frankenstein finds himself falling for his own creation thus setting up a deadly rivalry with the angry John Clare who wants Lily as his own, while John also seeks work and finds it in a ramshackle wax museum run by kindly Oscar Putney (David Haig) who has a blind daughter who takes something of a fancy to the poetry-loving, sometimes gentle giant.

As in season one, Eva Green’s Vanessa Ives becomes the central focus of the season as her friends battle to keep her safe and Helen McCrory’s Evelyn Poole works just as hard to wear down her resistance to her spells. Episode three of the season spends its entire running time on a backstory of Vanessa learning about nightcomers by becoming friends with Joan Clayton (Patti LuPone), a Cut-Wife (primitive word for abortionist) living isolated on the moors who introduces her to the ways of witchcraft. These three actresses are the champions of the season with mesmerizing performances of really intense and bloodthirsty material. Rory Kinnear as the Creature John Clare also gets to show both violent and kind sides as the pitiable creation born to be shunned by much of humanity, and Harry Treadaway as his creator likewise shows himself alternately strong (in defending Vanessa) and weak (when he succumbs to his drug addiction). The make-up for Josh Hartnett’s transformations into a werewolf is superb, never overpowering the actor’s face in order to allow him to give a performance even when under the spell of his lycanthropy. Simon Russell Beale has a season-stealing role as Ferdinand Lyle, a closeted gay man whose secrets are used by Mrs. Poole in order to blackmail him into infiltrating the household that is protecting Miss Ives. Billie Piper also has a field day all season growing slowly more confident and brazen as she realizes the power she can hold over men who desire her.

Here are the ten episodes of season two spread over three Blu-ray discs in the set:

The program’s widescreen television aspect ratio of 1.78:1 is faithfully rendered in these 1080p transfers using the AVC codec. There’s a cinematic quality to much of the look of the series that combines sharpness in interiors to a somewhat softer look outside (one suspects it’s to more seamlessly join live action with CGI backgrounds). Color has been desaturated somewhat in much the same manner as is done on Ripper Street which takes place during the same era. Thus, skin tones look a trifle bloodless even on the living though there can be decent color depth in Dorian Gray’s salons (a ball he gives midway through the season looks spectacular), for example, or in certain interiors of Sir Malcolm’s stronghold. Contrast likewise varies depending on the needs of the storytelling, and with that black levels rise and fall accordingly. The episodes have been divided into 7 chapters.

The Dolby TrueHD 5.1 sound mix is as aggressive and impressive as any on American television. Abel Korzeniowski’s jarring, jangling, and yet ingratiating music is given a terrific spread through the entire soundstage, and there are frequent split effects which put the viewer in the center of the activity on screen. Dialogue has been well recorded and has been placed in the center channel.

Reeve Carney Roundtable (7:47, HD): actor Reeve Carney meets with six diehard British fans of the series who all discuss the highlights of season one. He also throws out a few hints about season two which gets them very excited.

History of the Occult (2:06, HD): an animated trivia highlights vignette concerning the growth of belief in the occult through the centuries.

Character Profiles (HD): the actors who portray the following characters each briefly summarize the important events in their lives in season one and then go on to hint about upcoming events for them in season two:

Season two of Penny Dreadful takes a more deliberate march toward its inevitable confrontations of good versus evil this year spread out over ten episodes. The acting is outstanding all around, and the intricate ways the characters come to be involved with one another this season are even more impressive than they were in season one. Recommended!