Monty Python’s The Meaning of Life strikes Blu-ray with a nice edition that offers a decent but not great high definition transfer of the Pythons’ final movie together. Almost all of the extras from the 2003 Special Edition DVD have been ported over here, along with a brand new 30th Anniversary reunion of the surviving members of the group. The movie itself is a hit-and-miss affair, and frankly, so is the new transfer. But hit-and-miss Python is a few steps higher up the food chain than most comedies offered today. Monty Python fans will have already picked this up for obvious reasons. More casual fans are encouraged to rent, particularly if this will be their first voyage into the land of Python. 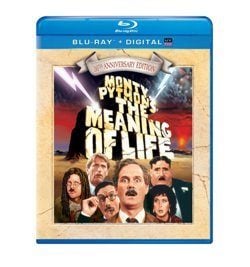 Long before the world had heard of Ricky Gervais or Sacha Baron Cohen, there was the television marvel of Monty Python’s Flying Circus. A precursor to Saturday Night Live, the British sketch comedy show was singularly outrageous, intelligent and at times deliberately infuriating. Sometimes these qualities existed all at the same time. With the combination of a group of members including John Cleese, Eric Idle, Terry Gilliam, Michael Palin, Terry Jones and the now-deceased Graham Chapman, the Pythons created a kind of comic alchemy that hasn’t really been seen since they disbanded after the movie currently under discussion. As a sketch troupe on television, these guys created a series of delightfully bizarre characters and situations, including the “Ministry of Silly Walks”, the “Dead Parrot” sketch, the Gumbys, the Bruces, the Lumberjack Song, and the truly horrifying “Whizzo Chocolate Company” sketch, among many others. (The Whizzo Chocolate Company offers such interesting confections to its customers as “Crunchy Frog” – which contains a crunchy, raw, unboned, real dead frog garnished with…oh, heck with it…) Having amassed a decent following over the years, the Pythons inevitably migrated to the movie theaters, with their larger-scale productions including Monty Python and the Holy Grail, Life of Brian, and of course, their final production together, The Meaning of Life.The Meaning of Life would be the largest scale production the Pythons ever attempted, using the largest budget they were ever afforded. And while it’s not the best-looking movie ever shot in many of its scenes, it certainly has some of the largest scale production numbers they ever pulled off – particularly the wild “Every Sperm is Sacred” song that pops up fairly early in the goings-on. Eric Idle has noted that this movie could actually pass as a musical in and of itself, given that it’s loaded with no less than 7 songs, most of which play out as complete music and dance sequences. It also has one of the single most outrageous bad-taste sketches ever inflicted, period: the “Mr. Creosote” routine, in which a spectacularly (and I do mean SPECTACULARLY) overweight man provides the fireworks in a presumably fussy restaurant. This sketch, which involves a truly horrifying amount of throwing up by the main character before the literally big finish, is one that I strongly recommend new viewers not watch before or after eating. (I note that it’s a sketch that Quentin Tarantino has apparently admitted even he found hard to watch – and that’s saying something.) There’s also Terry Gilliam’s opening short feature, “The Crimson Permanent Assurance”, combining the ideas of pirate movies with a story about elderly insurance accountants gone wild, which has all the look and slickness of Gilliam’s later masterpiece Brazil but without a particularly strong throughline to justify its length. And yet, it’s the best looking material in the movie, showing off Gilliam’s talents in visual composition and creativity. And it leads to a particularly silly joke about halfway through the movie proper, as the two movies quite literally go to war in front of the viewer. The direction of the rest of the movie, by Terry Jones, is a bit more utilitarian, although there are those big production numbers to punctuate things every few sketches.This movie essentially functions more as a long episode of the television series than it does as a feature film on its own. Rather than using the kind of centralized plot they had with Holy Grail or Life of Brian, here the Pythons retreat to their sketch comedy roots, concocting a series of unrelated routines roughly assembled within the title theme – the Meaning of Life. So there are sketches about birth and death and most things in between. There’s a beautifully odd opening bit with all the Pythons playing fish in an aquarium (the visual effects of which really have not aged very well at all). There’s another beautifully odd sketch about Mr. Death visiting some very polite party guests who have sadly eaten from the wrong plate. But there are also plenty of sketches here that really don’t fire on all cylinders. Some of the sketches along the way are simply interminable. Others are hilarious. (And your mileage may vary – some people find everything the Pythons did to be a riot, and some people find them a taste too difficult to acquire.) As a final offering from the Pythons before they all permanently moved on to solo careers at varying levels, The Meaning of Life stands as a great example of the funniest stuff they could do, and also a marker of their inevitable decline. Seen today, 30 years after its original release, the funny stuff still holds up. But the other material hasn’t become funnier with age. Fans of Monty Python will undoubtedly want to get their hands on this edition, particularly for the new reunion. More casual fans are recommended to rent this if they’d like to get an idea of what the Pythons could do on both a good day and a bad day. And all viewers are again warned to beware of Mr. Creosote.Monty Python’s The Meaning of Life was released on Blu-ray on October 8th. The Blu-ray edition contains a newer high definition transfer than the HD-DVD, an extensive array of extras (mostly ported over from the 2003 SE DVD), and instructions for obtaining a digital or Ultraviolet copy of the movie.

Monty Python’s The Meaning of Life is presented in a 1.85:1 1080p VC-1 encode that shines in some places and doesn’t do as well in others. Some scenes have a pleasing amount of grain and more of a filmic look to them. I tended to notice that the optical shots tended to look better and some sequences look quite good. (I would lean toward “The Galaxy Song” as a good moment for the PQ.) On the other hand, there are plenty of shots that look a bit digital to my eye – and it looks like some digital sharpening has been applied, particularly in the “Every Sperm is Sacred” number and some of the shots of “The Crimson Permanent Assurance”. I can’t account for the issues, other than to say that this was never the most beautiful movie in the first place. But I’m perplexed how the PQ could be good in one part of the movie and not as good in another.

Monty Python’s The Meaning of Life gets an English DTS-HD MA 5.1 mix, which mostly lives in the front channels but uses the surrounds primarily for the score. The mix is a good one, but nothing that jumped off the screen or out of the speakers. The Blu-ray also holds a French 2.0 DTS mix.

Monty Python’s The Meaning of Life is not their best work, but it’s not a bad movie either. There are moments of comic greatness here, and plenty of fat to go along with them. When the movie works, it’s a fine example of the Monty Python comedy aesthetic. When the movie doesn’t, when a sketch simply doesn’t come together or drags on way too long, the movie serves as a reminder why the Pythons completed their breakup after this project. The new Blu-ray presents a decent new HD transfer of the movie, along with almost all of the special features from the 2003 DVD. Python fans no doubt already have it. More casual fans are encouraged to rent it, and see what they think of this comedy style. And, again, everyone is warned about Mr. Creosote…

No Director's Cut. that's not a very nice thing to do! Still...will be buying this sometime. One of my most bought films, along with Brian.

I actually do think it is one of their best things. But I can respect all opinions. By the way Kevin... didn't you sight this organ donor card...? :p

I think the worst part is when he starts throwing up on the cleanup lady. Stomach-turning Monty Python madness! But I can't look away!

Always loved it. Loved the variety of stories within. Sorry to hear it's not a stellar transfer, but I think I'd rather deal with that over sticking with the DVD.

Please let me know what you think when you get it. I'll be curious to see what other people see in the PQ.

And the whole Creosote episode is just stomach-churning. You really have to be pushing it far if Quentin Tarantino is saying that he's getting nauseated. For me, the final insult is Cleese reacting to the ridiculous slur of the cleaning woman by finding a new use for the bucket...

And I've been very careful with that organ donor card. Although there was a nice man at the door yesterday asking "So, can we have your liver, then?"

Perhaps its because I was a 14 year old boy when this first came on HBO, but I always found the Mr. Creosote episode the funniest thing in the film. In fact, I cant tell you the number of times, when my kids wouldnt finish their plate, that I found my self imitating Cleese, "Its only waaafer thin." This is a must-buy for me.

As a long-time fan, this is a no-brainer-must-buy, but my favourite song is, always has been, the Galaxy Song. Memorize it, and pass grade 10 physics, no problem.

Yeah! lol It's kinda, if you feel like you're gonna puke and haven't yet done so, that bucket move will get it done!

Kevin EK said:
For me, the final insult is Cleese reacting to the ridiculous slur of the cleaning woman by finding a new use for the bucket...
Click to expand...