Lee Marvin had been in films for well over a decade when he scored a Best Actor Oscar for the western comedy Cat Ballou. For a good portion of its running time, William A. Fraker’s Monte Walsh repeats some of the good-natured cowboy tomfoolery reminiscent of that earlier picture, but the tone of the latter western becomes decidedly more mixed the longer it plays, and it quite suddenly and surprisingly turns from a rather light-hearted western lark to a fairly serious examination of the end of the Old West when cowboys were running out of range to ride and cattle to herd. The film features an excellent cast of leading and supporting actors playing trail hands so astutely that they look as if they were born in their saddles, but the mixture of tones can slip up on a person who might be expecting something a little more effervescent all the way through (Butch Cassidy and the Sundance Kid has a similar shift in tone), and the movie allows famed cinematographer William Fraker to helm his first feature film. 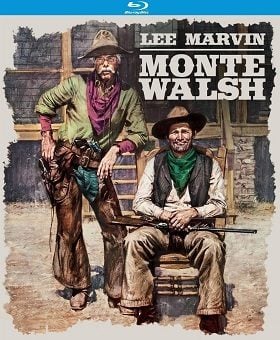 Cowpuncher Monte Walsh (Lee Marvin) and his trail mate Chet Rollins (Jack Palance) live a happy-go-lucky nomadic life, riding the range and taking jobs that come their way. They’re pleased when Cal Brennan (Jim Davis) offers them both jobs breaking wild horses and herding cattle because his ranch is an easy commute to their lady friends. Monte has a long-standing relationship with saloon hostess Martine Bernard (Jeanne Moreau) while Chet has been dating a widow (Allyn Ann McLerie) who owns the local hardware store. When the cattle herd ends up smaller than expected, Cal must let three of the hands go, among them Shorty Austin (Mitchell Ryan), but with cowboy work nonexistent, the three trail hands must find other ways to get money, a decision which will bring them into direct conflict with both Monte and Chet.

Lukas Heller and David Zelag Goodman based their screenplay on a story by Jack Schaefer (who wrote the classic Shane), and while there are plenty of memorably rambunctious moments (giving the smelly cook an unwanted bath, rushing for the outhouse when he retaliates through his cooking, brawling in a saloon out of sheer boredom), the transition from silly to serious happens more abruptly than one might imagine as an accidental murder is committed and then things go from bad to worse for the men put out of work. There is constant discussion about the lack of employment, the end of an era, the changing of the face of the West (maybe too much; we get the point), but the two protagonists seem awfully naïve when their one-time friends turn on them out of desperation, and Monte’s climactic revenge sequence isn’t milked for nearly enough drama or suspense. William Fraker does what he can with the material sometimes offering sweeping views of the vanishing prairies, and he films one absolutely breathtaking extended scene where Monte breaks a bronco that had heretofore been unbreakable, but otherwise, the film doesn’t have the style or consistency of other darker westerns of the same period.

Lee Marvin gets the best lines and gags in the movie and earns his top billing being especially touching when his world begins changing in many ways and he’s grappling with emotional ties that are severing yet feeling helpless to do anything about it. Jack Palance plays a relaxed, good guy part for a change and is very appealing. French star Jeanne Moreau is wasted as the dance hall girl waiting for a proposal that will probably never come. Mitchell Ryan, introduced to films with this movie, is so good in his part and exudes such screen charisma that one wishes the role could have been beefed up a bit more to be worthy of the performance Ryan is giving. Jim Davis does his usual no-nonsense job as the ranch owner while G.D. Spradlin, Michael Conrad, Bo Hopkins, and Tom Heaton turn up as cowpokes who seem authentically tough and weathered.

The film’s Panavision aspect ratio of 2.35:1 is faithfully rendered in this 1080p transfer using the AVC codec. At its best, the transfer is beautifully sharp and wonderfully colorful with realistic skin tones throughout. But occasionally outdoor scenes seem either overly bright or lacking a bit in contrast especially compared to indoor scenes which on the whole look a great deal more consistent. Black levels are erratic: sometimes milky and other times rich, and details can sometimes be lost in shadows, but occasionally the shadow detail is quite a bit better than at other times. There are dust specks throughout the presentation getting noticeably present halfway through the film and then continuing to the end. The movie has been divided into 8 chapters.

The DTS-HD Master Audio 2.0 mono sound mix is typical of its era but a lot more powerful than I was expecting and far superior to the DVD release of the film. Dialogue has been nicely recorded and is never dominated by John Barry’s ingratiating score or the atmospheric effects which also occupy the center channel in the mono mix, the cattle stampede and the wild horse roundup both delivering excellent mono sound. No age-related artifacts mar this splendid lossless mix.

Monte Walsh is an entertaining and acutely moving western with excellent star performances from its male leads. While the Blu-ray release is not without some flaws, it’s still heads and shoulders superior to the DVD release of the movie from five years ago. Recommended!

Matt thanks for the great review.