Frantisek Vlacil’s Marketa Lazarová is part rhapsodic parable, part art film. Its story of feuding tribes in medieval times is a rather simplistic one, but the director’s storytelling technique is anything but simple using haunting images, shifts in tone, a near-hallucinogenic music score, nonlinear timelines, and performances than run the gamut from near catatonic to overly ebullient. It’s a long and difficult film, not audience friendly if said audience is looking for a good old-fashioned popcorn flick but one that has its fair share of mesmerizing and attention-grabbing qualities. 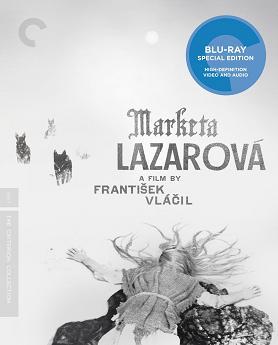 The Kozlik and Lazar clans have been feuding for years, dueling for superiority of their adjoining lands and doing whatever they can to gain the upper hand. Kozlik (Josef Kemr) has managed to abduct Lazar’s (Michal Kozuch) daughter Marketa (Magda Vásáryová) who had already been promised to a nunnery, and his son Mikolás (Frantisek Velecky) has raped her and claimed her as his own. Lazar has managed to capture Kozlik’s son Adam (Ivan Palúch), but neither side has any intention of bartering for the return of its loved one. Rather they want to use their captures simply to crow about their ingenuity. The church has not remained out of the conflict either as the Bishop’s (Harry Studt) son Christian (Vlastimil Harapes) has been abducted by Kozlik’s sons and has become involved with Kozlik’s daughter Alexandra (Pavla Polaskova) who is now pregnant. A priest named Bernard (Vladimir Mensik) has been sent to try to smooth feelings between the clans but has been singularly ineffective.The script by director Frantisek Vlácil and Frantisek Pavlicek adapted from what was once thought to be an unfilmable novel by Vladislav Vancura paints an unrosy picture of the era and its people, and the church is included in the satirical brickbats (Bernard is much more interested in feeding his face with all the food and wine he can consume rather than feeding the souls of these people with kindness and love who are consumed by hatred; and the nuns are none too forgiving when Marketa is released by the Kozliks and disowned by her parents since she now has no dowry with which to enter the convent). The ugliness of the men’s souls as they unmercifully hunt one another (symbolized rather hamfistedly by a roaming pack of wolves who run roughshod over the plains) is captured vividly in the director’s widescreen frame, and within that frame he also manages to find beauty as well as repulsiveness. There are exotic vistas of flattened seas of grass alternating with incredible shots of the same areas blanketed with snow. But we also see that same valley covered with an ocean of bones both of man and animal leaving the viewer with an utterly dejected feeling of hopelessness, not helped by an epilogue in which we find that both Marketa and Alexandra gave birth to sons after the deaths of their fathers who carried on the martial tendencies of their ancestors bringing the entire film’s narrative full circle.The heads of the two families played by Josef Kemr and Michal Kozuch have the most dialogue and both handle their emoting with great aplomb. Many of the other actors must give performances more in pantomime rather than with words. Magda Vásáryová (in her first film) as the title character is more effective in revealing what’s going on behind her eyes than the much more inexpressive Pavla Polaskova as Alexandra. Playing crafty Koslik brothers, Frantisek Velecky as the more active Mikolás and Ivan Palúch as the more cerebral Adam are both very effective. As the priest Bernard, the film’s lone comic relief, Vladimir Mensik tends to overdo it a bit but almost anything that offers the audience a break from the otherwise sullen and downcast story is pretty welcome.

The film’s theatrical 2.35:1 aspect ratio is beautifully delivered in a 1080p transfer using the AVC codec. Images are mostly gorgeous in sharpness and detail, and only go out of focus when the director is going for a deliberate effect. The grayscale has been dialed in to perfection with deep black levels and solid whites that bloom only when an effect is occurring. There are no age-related artifacts at all that reveal how many decades ago this film was shot. The white subtitles are always easy to read, even against the backdrop of those snow-filled scenes. The film has been divided into 19 chapters.

The PCM 1.0 (1.1 Mbps) sound mix features really impressive fidelity for the almost constant music score by Zdenêk Liška. The dialogue was completely post synched which always carries with it that arid, unreal quality, and late in the film there is a hint of distortion with the music and the dialogue fighting one another for prominence. But the soundtrack is clean and free of any hiss, clicks, pops, or crackle that would distract from the spell the film is attempting to weave.

In the Web of Time (21:23, HD): a 1989 documentary on director Frantisek Vlacil’s career in which the director shares his work techniques and shows clips from several of his films.Peter Hames Interview (17:43, HD): the film historian offers some background information on the director and on the original novel and its writer, and then discusses the adaptation of the book into a cinematic experience. He also discusses the uses of imagery and the music in the movie.Antonin Liehm Interview (9:37, HD): the film critic discusses the work of director Frantisek Vlacil.Marketa Lazarová’s Actors (39:59, HD): back and forth interviews with three actors who appeared in important roles in the film: Magda Vásáryová (the title character), Ivan Palúch (Adam), and Vlastimil Harapes (Christian).Theodor Pistek Interview (27:02, HD): the film’s costume designer (listed in the credits as “artistic collaborator”) discusses the construction of all the clothes and props for the movie and his disappointment that nothing appears to be left of them except his own original sketches.Storyboards: step-through layout of all of director Frantisek Vlacil’s storyboards for the movie.Restoration Discussion (9:43, HD): a discussion by Ivo Marak about the extensive 2011 restoration of the movie with behind-the-scenes views of artists at work and before-and-after images showing the results.Theatrical Trailer (2:39, HD)40-Page Booklet: presents the cast and crew lists, numerous stills from the movie, film professor Tom Gunning’s analysis of the movie, translator Alex Zucker writing on Vladislav Vancura and his original novel, and an interview with director Frantisek Vlácil conducted at the 1969 Cannes Film Festival.Timeline: can be pulled up from the menu or by pushing the red button on the remote. It shows you your progress on the disc and the title of the chapter you’re now in. Additionally, two other buttons on the remote can place or remove bookmarks if you decide to stop viewing before reaching the end of the film or want to mark specific places for later reference.

A film as complex and difficult to decipher as Frantisek Vlacil’s Marketa Lazarová fairly cries out for an audio commentary, the only missing piece in an otherwise heady stew of medieval power plays and character exploration offered up in stunning quality by Criterion. For those willing to experiment with a foreign language art film on steroids, recommended!

This is a stunning film, a gorgeous disc, and an amazing package. I know almost nothing of Frantisek Vlácil and the supplements provide very helpful background information on the director, the source material, and the film. None of it necessary going in, but once I finished the film, I was hungry for context and commentary, and it delivered.
You must log in or register to reply here.