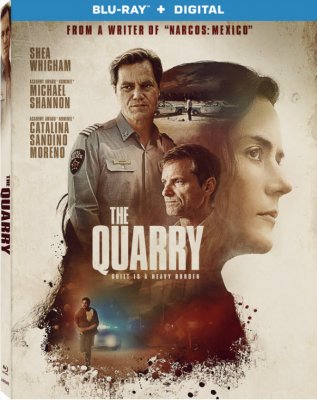 Starring Shea Whigham, Academy Award® nominee Michael Shannon (2016, Best Supporting Actor, Nocturnal Animals), and Academy Award® nominee Catalina Sandino Moreno (2004, Best Actress, Maria Full of Grace) – and from a writer of “Narcos: Mexico” – The Quarry arrives on Blu-ray™ (plus Digital), DVD, and Digital on June 16 from Lionsgate. This film is currently available On Demand. In this searing thriller, a drifter (Whigham) kills a traveling preacher and takes his place at a small-town church, but the police chief (Shannon) suspects foul play. Including audio commentary with the director, The Quarry Blu-ray and DVD will be available for the suggested retail price of $21.99 and $19.98, respectively.

OFFICIAL SYNOPSIS
From the novel by Damon Galgut comes this searing thriller, a tale of sin and redemption set in the wilds of Texas. After murdering a traveling preacher, a fugitive drifter (Whigham) travels to a small town and poses as the man he killed. Though the congregation loves the drifter’s sermons of forgiveness, the local police chief (Shannon) is suspicious of the man. Soon a gruesome discovery at a local quarry forces the killer to fight for his freedom. Screenplay by Scott Teems & Andrew Brotzman, and directed by Scott Teems.