The latest film by Bryan Singer(The Usual Suspects, X-Men) is an interesting reimagination of the classic tale Jack and the Beanstalk. Although Jack The Giant Slayer maintains a manic pace without becoming ponderous, the film's epic ambitions fall short in spite of the three-dimensional eye-candy that is arguably the best part. The excellent cast includes Ewan McGregor, Ian McShane, Stanley Tucci, and Nicholas Hoult as Jack. 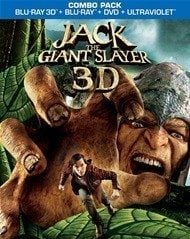 The original story of Jack and the Beanstalk is relatively simple and demands expansion to fill a feature film. Screenwriters Christopher McQuarrie(Jack Reacher) and Darren Lemke(Lost) fill the story with additional characters to enrich the story.Nicholas Hoult(Warm Bodies) plays Jack, the young hero finding himself with a handful of magic beans. Jack's love interest is Princess Isabelle(Eleanor Tomlinson) and Ian McShane plays her disapproving father King Brahmwell. Ewan McGregor plays Jack's ally from the king's knights, Elmont, and Stanley Tucci plays the villainous Roderick.Jack The Giant Slayer may have been a victim of its marketing, since the film is fast-paced and fairly entertaining, especially in 3D. I had relatively low expectations for Jack The Giant Slayer, and it manages to be a fairly intereesting popcorn film. The story includes enough surprises in it to make it appealing, and the action is virtually non-stop. The giants manage to be genuinely menacing, but the most extreme violence occurs by suggestion rather than explicitly to appeal to the widest audience.

Jack The Giant Slayer appears on Blu-Ray in 2D and 3D 1080p in its original 2.40:1 aspect ratio.The stereo window of the 3D version is excellent with such varying illusions of distances among objects that multiple planes are perceptible in many scenes. Mediocre 3D is typically limited to an appearance of 2 planes (foreground and background) with little in between. Although Jack The Giant Slayer is not filled with "wow" factor scenes, the 3D effects are used discreetly to create a desirable level of 3D immersion throughout the film. No ghosting was evident in any scenes on my display(Panasonic 65VT50).Black levels and fine detail are excellent. Colors tend to be somewhat muted for dramatic effect. The video is near reference quality.

The English DTS-HD Master Audio 5.1 tracks have very good directional audio. The sound effects and musical score are employed well to keep open the sound stage. This is not a quiet film but the dialogue is always audible and intelligible over the sound effects.

The special features are located entirely on the 2D Blu-ray and DVD. The 3D Blu-ray includes only the feature film.Special features include the following, all in 1080p:Become A Giant Slayer: Jack(Nicholas Hoult) guides you as you climb a virtual beanstalk by use of the arrows on your remote control. Various stops on the climb include behind the scenes featurettes, shown as symbols, that can be selected by hitting "Enter" or "Select" on your remote control. Be careful or you might fall off the beanstalk and be forced to start over again! A special video surprise is the reward for making it to the top.Deleted Scenes(8:27): These all play together in one selection.Gag Reel(3:09): This is a short blooper reel of the cast during production.Also included on the 3D Blu-ray are 3D trailers for Man of Steel(2:32) and a trailer for other Warner Brothers/New Line 3D films on Blu-ray(1:39).Also included are 2D Blu-ray, DVD, and Ultraviolet Digital Copy for those who want their video library stored in the clouds.

Jack The Giant Slayer is an average action film/fairy tale with above average 3D. The storytelling material and excellent cast make the film a worthwhile popcorn film, so long as you do not go in with stellar expectations. The video and audio are first-rate, and the special features are recommended for anyone who enjoys the feature. Jack The Giant Slayer may be a little intense for younger viewers, but the violence is largely implied rather than graphic, making the film appropriate for most members of the family.

I like this film more than you and will buy this title once it gets to a more reasonable price point. It's almost there, but not quite.

Robert Crawford said:
I like this film more than you and will buy this title once it gets to a more reasonable price point. It's almost there, but not quite.
Click to expand...

I enjoyed the film myself and would have rated it higher, except that it will not be to everyone's tastes, and I took that into account in the review.
You must log in or register to reply here.