In all of cinema there will be a handful of names uttered in almost any list of the most important and influential filmmakers; among them Kurosawa’s place is rightfully earned. To study Kurosawa is to study the progenitor of many western director’s influences, with echoes of his style and craft found in other greats on that list, such as Steven Spielberg. Of all Kurosawa’s celebrated works, such as Rashomon (1950), Throne of Blood (1957), Yojimbo (1961) and Ran (1985), Ikiru stands unassumingly the tallest, certainly his most humanistic and emotionally rewarding. 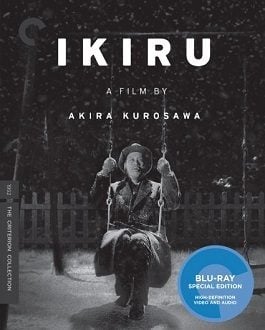 “I have less than a year to live. When I found that out... somehow I was drawn to you. Once when I was a child, I almost drowned. It's just like that feeling. Darkness everywhere, and nothing for me to hold onto, no matter how hard I try. There's just you.”

Behind the mounds of routine paperwork sits Kanji Watanabe, a cog in the bureaucratic machine of 1950s Japan. A 30 year career in local government without a day missed is interrupted when a visit to the medical clinic for stomach pains shows terminal cancer. Watanabe, many years a widower who lives with his son and his son’s wife, is struck with the realization that his life may end without him having really lived. With precious little time left, Watanabe wrestles with his diagnosis and how he might close out his life. He finds his answer in response to a group of local women, rebuffed in their efforts to lobby for a park to be built where a foul, cesspool lay now. He pushes to create the park through the labyrinthine process of local government.

Ikiru is at first a statement on bureaucratic futility and a snub of systemic routine that exists without consideration of effect or purpose that becomes a powerful portrait of vulnerability and fragility before transcending itself to dare to find answers to the question of what the reason for it all might be. A deeply human tale gifted to audiences with a two-part structure. In the first part, we watch as Watanabe is broken by news of his deadly cancer and as he writhes inwardly realizing that he may have wasted his years and would disappear never having mattered. The shorter, second part examines the realization of his inspiration to pursue selflessly the building of the park. Fellow bureaucrats, unaware of his diagnosis, fail to understand why his last months were so focused on building the park. They rationalize, dismiss, and ignore the reality in favor of their own biases and failed views. Even his own son does not know the truth of why Watanabe shook off the chains of his station to focus so singularly on the park.

Perhaps the most striking accomplishment of Ikiru is how it can profoundly affect the viewer. Rare that a piece of cinema can at once be unassuming and forthright in what it has to say; that our purpose for being and reason for existence in the river of time is about the purpose we find in and for ourselves. Kurosawa, always the visual artist with an extraordinary gift for framing and movement, produces a treasured work brimming with moments of beauty – and perhaps his most unabashed display of existentialism. And with a lyrical sense, Kurosawa unfolds his story with great delicacy.

Performances are excellent, with Takashi Shimura as Kanji Watanabe delivering an astonishingly human and understated performance as the dying bureaucrat. Wearing deep contemplation on his face like places on a map, with the fear, not of dying, but of dying never having really lived, etched in long pauses and gripped blank stares he holds. And we are gripped watching his fear. At once we are empathetic, placing ourselves in his shoes – if just for a moment – contemplating how we might look upon our years on this earth and consider if we lived a worthy life. Remarkable the feelings conjured as Watanabe races to make his life have meaning, and in the film’s second chapter, as we see those who knew and worked with him, consider not just what he did, but why and whether it made a difference in how he should be remembered. Shimura’s turbulent emotional journey moves through fear and joy, ceding to desperation before finding the peace that could only exist for his character, with beautiful subtlety. In that, we understand even in the machine of society, our role and imprint on this world is as unique to us as our fingerprints.

Akira Kurosawa’s Ikiru is a work of enlightened genius. A piece of art that is both of its time and far ahead of it. It isn’t so much a film about the meaning of life as about finding meaning in the life we live. Kurosawa’s film transcends where and when it was filmed, suggesting the questions and struggles that rise from Watanabe’s devastating news isn’t so much about finding the answer for all time, as a perennial reminder we will each of us stumble upon the same question, and Ikiru is an experience that can help us answer the question for ourselves. Remarkable cinema.

Criterion presents Ikiru in the original 1.37:1 aspect ratio in a new digital transfer created in 4K from a 35mm fine-grain master. The accompanying booklet advises the fine-grain master is the best remaining film element for Ikiru whose original negative no longer exists.

Detail is excellent, the essence of film grain preserved, and contrast largely superb. While thousands of instances of damage and wear were corrected (manually using MTI’s DRS – and leveraging Digital Vision’s Phoenix for small dirt, jitter, etc.), many scratches along with some density fluctuations, bumpy scene transitions, and a couple of moments where scenes jump (from missing frames) are a part of the package. I’ll be perfectly honest, as the film begins, these likely uncorrectable flaws stand out, but as the story pulls you in, these blemishes and oddities tend to disappear and the moving story and compelling performances take hold.

The original monaural soundtrack has been remastered at 24-bit from a 35mm optical soundtrack print. The result is a decidedly pleasing, stable audio experience. Clean, clear sounding with surprising warmth and depth, this audio is remarkably absorbing.

A good assembly of extra features arrive with Criterion’s Ikiru, though almost all are culled from previously produced releases. Still, the 2003 commentary remains an informative listen, and the hour-and-a-half documentary special – A Message from Akira Kurosawa: For Beautiful Movies – covers a good deal of ground from Kurosawa’s career and creations. Inclusion of the film’s original trailer is also most welcome. Special features are presented in 1080i.

Audio commentary from 2003 by Stephen Prince, author of “The Warrior’s Camera: The Cinema of Akira Kurosawa”

A Message from Akira Kurosawa: For Beautiful Movies (2000), a ninety­-minute documentary produced by Kurosawa Productions and featuring interviews with the director

Documentary on Ikiru from 2003, created as part of the Toho Masterworks series Akira Kurosawa: It Is Wonderful to Create, featuring interviews with Kurosawa, script supervisor Teruyo Nogami, writer Hideo Oguni, actor Takashi Shimura, and others

Ikiru is a moving experience; a masters hand in all facets of production, thoughtfully expressive of its central theme, and performed with gentle craft, wit and wonder.

Ikiru surprises in the joy it finds even in the sadness of Watanabe end, and how it reminds that there can be meaning in the smallest moments we experience – a happy conversation, a walk, a sunset – as long as we recognize that moment.