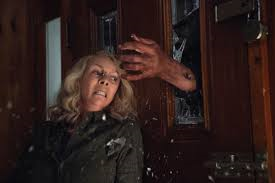 Nice review although your actual review seems to indicate that you liked the film more than the rating (3.5/5) you gave it.
Expand signature
It's gonna be a hell of a ride. I'm ready. .
Reactions: Timothy E

Tino said:
Nice review although your actual review seems to indicate that you liked the film more than the rating (3.5/5) you gave it.
Click to expand...

You make a very good point. I struggled with the numerical rating, which is obviously subjective. I selected the numerical rating that I did in consideration of the typical viewer. If you like horror movies with gore, you might rate this a 5 out of 5. If scary movies are not your thing, you might rate it a 1 out of 5. I like slasher movies if they are made well (most of them are not in my opinion) but I consider this one to be well made. At the same time, I predict it will not be in the running for Academy Award for best picture, so I consider that when assigning a grade. My rating for the film itself would have been higher than 3.5 if I went entirely by my own subjective scale, but probably lower than 3.5 if I were judging it on artistic merit.

Of those who have already seen the film, what grade would you assign on a scale of 1 to 5?
Reactions: Sam Posten

Timothy E said:
Of those who have already seen the film, what grade would you assign on a scale of 1 to 5?
Click to expand...

And I think you should base your score solely on your opinion. Not on what a typical viewer might think. When I’m reading your review I want your opinion.
Expand signature
It's gonna be a hell of a ride. I'm ready. .
Reactions: Brian Kidd

Unless it's in there are I completely forgot it, no alternate ending on the disc...
Expand signature
Colin Jacobson
http://www.dvdmg.com

The original ending done before reshoots is not included among the deleted scenes in this edition.

I'd give it a 4. I really enjoyed it, overall, and felt that it is the best sequel that has been produced in the franchise. I did feel like it dragged a bit from time-to-time and could have used some more tightening. I also felt like the final section of the film felt a bit too much like a "Hollywood" climax and not in keeping with the tone of the rest of the film. Now that I know it was reshot, that makes more sense to me.

I really liked the visuals, acting and such. The plot just turned me off a LOT though.

Watched this the other night...bottom line, an awful film. Bad acting, absolutely horrible and ridiculous writing, annoying characters seemingly designed to make you root for Michael Myers. Directed apparently by a guy that seemed to have no idea what a horror film is. The story seemed to have been dreamed up by a confused 5 year old.

Poor Will Patton looked like he did not want to be there the entire time and gets to deliver some truly idiotic dialogue that makes you wonder if it was meant to be funny. I had a hard time making it through this picture it was so lousy.

However, one thing did stand out...the score, apparently done by Carpenter and his son, was outstanding. If only it was in service of a better film.