Fast & Furious 6 offers tanks to its fans on Blu-ray in an edition that offers the movie in solid high definition and includes a generous spread of special features. The movie itself isn’t quite as fun as its predecessor, Fast Five, and it bogs down at several points along the way during its two-hour plus length. But it does continue to benefit from the easy chemistry of the cast and a few good fight scenes and chases along the way. Some of the chases are starting to get into the territory of science fiction, but there’s still plenty of gas left in this engine. Fans of the series will no doubt already be grabbing copies of this one or putting it on their lists. Given the amount of material, this is an easy title to Recommend for purchase – if not for the movie itself, for all the material that surrounds it here. And I should note that the Blu-ray includes a 2 minute scene from the next film, Fast & Furious 7. It’s not listed on the packaging, but it’s very much on the Blu-ray. 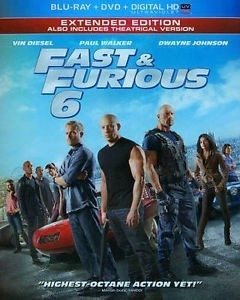 Fast & Furious 6 is presented in a 1080p AVC 2.35:1 transfer that brings in multiple environments and flesh tones in a vivid and satisfying manner. A lot of this movie takes place at night, and the transfer delivers pleasingly deep black levels. The greenscreen work done at various points in the movie doesn’t show its seams. As usual for this series, this is a satisfying presentation.

Fast & Furious 6 is presented in an English DTS-HD Master Audio 5.1 mix in English, as well as standard DTS mixes in Spanish and French, and an English DVS track. As with the last two films, this is a fun, loud mix, with plenty of work for the subwoofer and the surrounds for the various gunplay sequences, fights and chases. The tank and airplane sequences alone are marvels of immersive action sound goodness. This is another mix where I’m throwing in the perfect score – because it earns it. Don’t listen late at night, since you’ll want to hear this in all its glory.

Fast & Furious 6, is an entertaining film, but not at the level of previous films in the series. The story moves too slowly and contains too many outrageous moments. However, the easy chemistry of the cast continues to hold sway, and there are still plenty of fun moments along the way as the movie does to London what Fast Five did to Rio. Given where the movie ends, it’s clear that there are still more adventures to be had with this group of characters, as we will see with the upcoming Fast & Furious 7. The unfortunate death of actor Paul Walker will obviously affect how things play out, but this series has plenty of life left in it. Given the lovely high definition presentation and the generous collection of extras, this is a handsome Blu-ray package and I’m happy to recommend it for purchase, even if the movie itself doesn’t quite stand up to the level of the prior entry.