The modern day iteration of the classic primetime soap opera keeps on pumpin’ as Dallas: The Complete Second Season arrives on DVD. The release, which hit store shelves in mid February, is designed to complement the premiere of the TNT series’ 3rd season. The show continues to star a mostly young, attractive cast and features extensive appearances by three key members of the original cast: Patrick Duffy, Linda Gray and the final ones by the late Larry Hagman. The Season Two set comes with all 15 episodes of the second year, along with a commentary on a crucial episode about JR, a good excerpt from the cast’s appearance at Paley Fest, a brace of deleted scenes, some fashion spotlights from the TNT website and a few featurettes on the third disc. Given the fun of the series, and given the special features on the final discs, this season set is Recommended for purchase by fans of either version of the series. 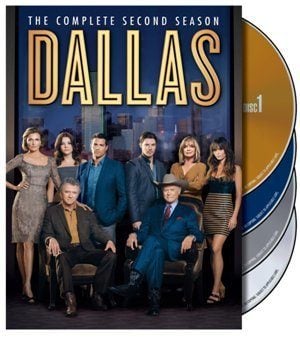 Dallas: The Complete Second Season is presented in a 1.78:1 anamorphic transfer that feels like an accurate representation of the intended look of the show. As with the first season, the high definition cameras used to shoot the series reveal a fair amount of detail in the sets and locations, not to mention on the faces of the cast

Dallas: The Complete Second Season is presented in an English Digital 5.1 Dolby Digital Mix (@ 384 kbps) which mostly lives in the front channels but which gets the usual punch from the music in the surrounds. Some racing sequences in early episodes are quite lively in the mix. The dialogue is clear and easy to understand, which is crucial in the later episodes of the season where the heavy plotting goes into overdrive.

Dallas continues its return to television with the second season’s fifteen episodes. Longtime fans of the series will no doubt enjoy seeing many old friends over the course of the year. Newer fans may enjoy the younger cast. Soap opera fans in general will enjoy the frothy material. It gets a bit outlandish at times, but there is a strong, confident through line to the season. If the series can continue to deliver stories this fun, it may yet have several years to add to the saga. The DVD set provides all fifteen episodes in fine video and audio quality. The Paley Fest excerpt and the commentary on the crucial funeral episode both add plenty of information and insight into the way the new series is being handled. This set is Recommended to fans of both iterations of the series.

As you point out, the Cliff Barnes from the original series never did what he does here, i think the way they write him is all wrong and it's almost like this Cliff has been taken over by extra-terrestrial beings, though i do enjoy the new show.
You must log in or register to reply here.