There was international excitement when it was announced that Sean Connery was returning to the James Bond franchise for Diamonds Are Forever, and while the film might not have reached the heady quality of Goldfinger or From Russia With Love, audiences didn’t care and went to the film in droves notching the biggest box-office for a 007 picture since Thunderball. But it was a one-time deal. Connery wasn’t interested in continuing, so the producers were right back where they started once the film was completed: no Bond on deck. 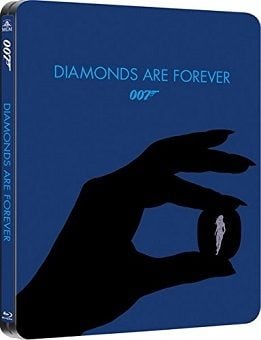 When a series of seemingly innocent people end up dead from having handled a large stash of smuggled South African diamonds, James Bond (Sean Connery) is assigned to look into the matter. His investigation eventually leads him to Las Vegas where the diamonds are somehow connected to reclusive billionaire Willard Whyte (Jimmy Dean). With an enigmatic but devastatingly attractive Tiffany Case (Jill St. John) also involved in the caper, Bond eventually finds himself facing off once again with Ernst Blofled (Charles Gray) in another one of his schemes for world domination.

Though there are some of the most famous set pieces in the entire Bond oeuvre present here (the moon buggy chase in the desert, the incredible chase in the streets leading to one notorious parking lot in Las Vegas, the fight in a tiny glass-enclosed lift in Amsterdam) and two sets of infamous, dastardly henchmen/henchwomen (gay couple Mr. Wint and Mr. Kidd, the gymnastic Bambi and Thumper), Diamonds Are Forever is the weakest of the Connery Bonds. The pre-credit sequence is lacking in tension, thrills, and dark-tinged wit, and the ultimate use for all those diamonds doesn’t become clear until far too late in the game, all of this courtesy of the Richard Maibaum-Tom Mankiewicz script. Because the entire secret about the use of the diamonds in Blofeld’s scheme isn’t revealed until the last quarter of the movie, Bond’s adventures take on less import as the movie is transpiring and rather seem like a series of unconnected occurrences, some of them very entertaining, it’s true, but not always connecting in the way the better Bond films had done with their action scenes and with a singular focus on certain objectives. The villains this time out are enjoyable and different to be sure, but they’re consistently foiled in not very enterprising ways while Bond’s after-quips really seem thin this time around. Guy Hamilton who helmed the masterful Goldfinger doesn’t quite pull off that magic again, but it’s a solid effort, just not the most memorable of them.

Sean Connery gives a good account of himself as Bond in his last Eon-produced 007 thriller (twelve years later he’d don the tux for one last go in the lamentable Never Say Never Again, not produced by Eon), but he’s noticeably older and heavier. Neither Jill St. John as Tiffany Case nor Lana Wood as Plenty O’Toole (though both looking quite beautiful) make particularly striking impressions with their acting. Charles Grey who had played a different role in You Only Live Twice now plays Blofeld (as well as several copies of Blofeld used as decoys), a suave performance but still not seething with evil. No, the evil is supplied by Putter Smith and Bruce Glover as Mr. Kidd and Mr. Wint who hold hands after killing off two messengers and pop up at all the right times to thwart their quarry. Jimmy Dean’s stunt casting as the Howard Hughes-like recluse Willard Whyte doesn’t work at all.

The Panavision 2.35:1 transfer (1080p, AVC codec) is irritatingly inconsistent throughout. Some scenes look bold and beautiful with superb sharpness, excellent contrast, and brilliant color saturation. But there are other scenes that look brown and much less distinct. Flesh tones run the gamut from overly brown to overly rosy and sometimes completely unrealistic. Worse, black levels are milky. The main titles are not windowboxed. The film has been divided into 32 chapters.

The DTS-HD Master Audio 5.1 sound mix is a somewhat lackluster effort. Music and ambient sounds don’t spread much past the front channels, and the many explosions and firestorms don’t have much robustness with the LFE channel underutilized, unthinkable in a 007 movie! There is a fair amount of directionalized dialogue, however, which does give the mix some passing interest. Most of the dialogue, of course, can be found in the center channel. This is one film where the user may prefer the Dolby Digital 1.0 mix also provided on the disc.

Audio Commentary: another outstanding compilation effort this time hosted by David Nailer who brings in comments from a host of cast and crew members and all placed thoughtfully at the moments in the film where they’re most pertinent.

Sean Connery 1971: The BBC Interview (5:13, SD): shot in 1971 after filming was completed, the star answers several questions about his return to his most famous role and the fact that this would be his last time appearing as Bond (untrue as it turned out later).

Lesson #007: Close Quarters Combat (4:36, SD): focuses on the memorable fight in the lift between Bond and Franks showing behind-the-scenes rehearsals with the stand-ins and then the two actors going at it. Narrated by director Guy Hamilton.

Explosion Tests (1:53, SD): shows us the layers used to make a final composite image in a climactic explosion.

Deleted Scenes (7:38, SD): six scenes can be viewed separately or in montage.

Inside Diamonds Are Forever (30:40, SD): a documentary about the film’s production delving into getting the franchise back on track after the disappointing returns for the previous film and featuring interviews from many of the film’s stars remembering their time on the movie, Ken Adam’s production designs, and covering the movie’s big action set pieces. The two primary Bond girls Jill St. John and Lana Wood especially praise Sean Connery as the definitive Bond.

Cubby Broccoli: The Man Behind Bond (41:23, SD): a tribute to Albert Broccoli’s life and career giving a detailed biography of both his personal and professional failures and successes in a loving tribute to the man.

Exotic Locations (4:25, SD): narrated by Maud Adams, it takes the viewer to the various locations used in the film.

Diamonds Are Forever is a lot of fun, but its overall quality pales in comparison to the earlier, more compact and heady adventures of the great 007. Still, this is not one of the stronger Blu-ray transfers of the series either visually or aurally. The steelbooks are exclusive the Best Buy at the time being, but Amazon has a page readied for selling them, and some marketplace sellers are asking outrageous amounts for them.

One of my most watched of the connerys! Love it! Locations, Jill, the mustang, and did I mention the best score of the series to date?
I will stick with my bond 50 set until we see the uhd blu Ray set.
I did see the steel awes at Best Buy last night and they are very cool!!

Putter Smith and Bruce Glover as Mr. Kidd and Mr. Wint has to be two of the most memorable villains of all the Bond films. Love the scene of the secret tape tucked inside Jill's bikini bottom... very cheeky butt indeed!

For myself coming after the magnificent ON HER MAJESTY'S SECRET SERVICE (1969) this one is a big letdown but not because of Mr. Connery. I like it better than the first two Roger Moore Bonds but that's still not really saying very much. In a way George Lazenby is fortunate that he passed this one up as it would have certainly sealed his fate precluding any further Bonds on Mr. Lazenby's part.


If Sean Connery had to do one final Eon Bond then I wish that the more substantial ON HER MAJESTY'S SECRET SERVICE (1969) had been it.

atcolomb said:
Putter Smith and Bruce Glover as Mr. Kidd and Mr. Wint has to be two of the most memorable villains of all the Bond films. Love the scene of the secret tape tucked inside Jill's bikini bottom... very cheeky butt indeed!
Click to expand...

Only one man!
Great radio spots for this film!!!

Had to give this thread a bump because I just read a fabulous old 1971 interview from the Observer, from when Sean Connery was promoting Diamonds Are Forever. This was from the days before stars had publicists, or were at all concerned about their image. He arrives for the interview hung-over, boasts of having been to a strip-club (the Raymond Revuebar) and disparages another acting colleague (("K-k-kenneth f-f-fucking T-t-tynan”) - all in the first paragraph. Seriously good stuff. 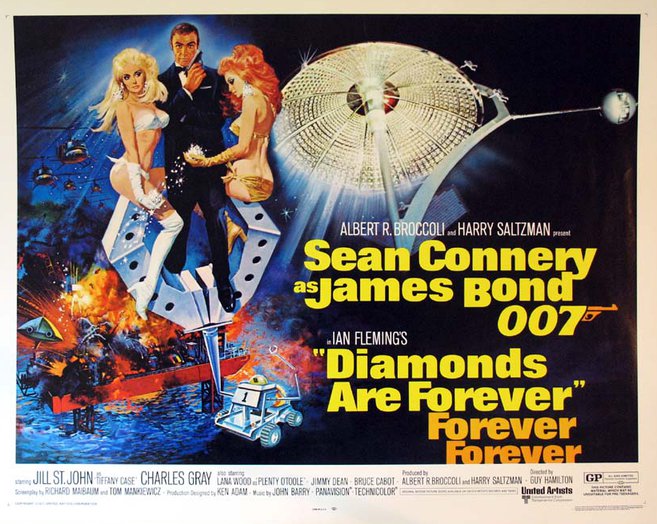 Adapted from a 2016 post. When Diamonds Are Forever came out 50 years ago this month, it was a huge deal. Sean Connery was back! Everything was back to normal in 007 land. Nowadays, Diamonds is mor…

hmssweblog.wordpress.com
You must log in or register to reply here.