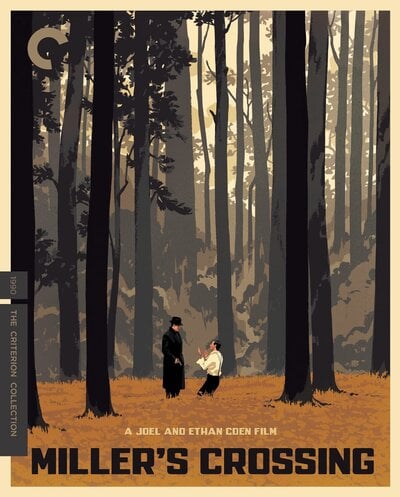 ​
A Roaring Twenties gangster saga that only the Coen brothers could concoct, Miller’s Crossing marries the hard-boiled sensibility of classic noir fiction with the filmmakers’ trademark savory dialogue, colorful characters, and finely calibrated set pieces. Gabriel Byrne brings a wry gravitas to the role of Tom Reagan, the quick-thinking right-hand man to a powerful crime boss (Albert Finney), whose unflappable cool is tested when he begins offering his services to a rival outfit—setting off a cascade of betrayals, reprisals, and increasingly berserk violence. The Hopperesque visuals of cinematographer Barry Sonnenfeld, majestically elegiac score by Carter Burwell, and vivid supporting performances from John Turturro and Marcia Gay Harden come together in an intricately constructed slice of pulp perfection that crackles with sardonic wit while plumbing existential questions about free will and our own terrifying capacity for evil.

Looking forward to that discussion between Abbott and the Coens.

It's my day off and I haven't seen this in years, so I'm sitting right down to watch it.

Just to give everyone a heads up, the Coens have made some trims to the film, so this is a minute or two shorter than the Fox Blu-ray.

TravisR said:
Looking forward to that discussion between Abbott and the Coens.
Click to expand...

Christ, it was annoying watching Megan Abbott waving her arms around. It's invariably a mistake to show the interviewer, with all their facial tics, nodding and grinning. I enjoyed the interviews sans Abbott far more. The ones with Carter Burwell and Barry Sonnenfeld were particularly good. Glenn Kenny's essay is also excellent. Shame Criterion didn't get a fresh 4K remaster.

I wish the Coens and Criterion would stop messing with these films. First Blood Simple and now this. looks like I’m sticking with the Fox blu. Glad I have a choice on getting the theatrical cut. "I gave you all the clues"

Rodney said:
I wish the Coens and Criterion would stop messing with these films. First Blood Simple and now this. looks like I’m sticking with the Fox blu. Glad I have a choice on getting the theatrical cut.
Click to expand...

I don't think Blood Simple has ever been released on video in its theatrical version.

Worth said:
I don't think Blood Simple has ever been released on video in its theatrical version.
Click to expand...

I could be wrong but wasn't the VHS and laserdisc the theatrical cut?

If memory serves correctly; the VHS and Laserdisc releases of Blood Simple replace the song "It's The Same Old Song" with "I'm A Believer". This was corrected in the 2000 DVD release, but that version has a number of minor changes to the film.

I hadn't realised that the version of Danny Boy in Miller's Crossing was a specially recorded version by Frank Patterson for the movie, before it was discussed in the Carter Burwell supplement. It is widely regarded as one of the definitive versions of this - very widely recorded - song. I've now ordered the soundtrack CD with the two Frank Patterson vocals included, as this is really one of Carter Burwell's superior efforts, despite it only being his third soundtrack!

The classic scene, where "Danny Boy" provides the music, was pivotal in getting rid of Norwegian film censorship. Prior to Miller's Crossing and Goodfellas in 1990, Norway had one of the world's strictest film censorship boards. They cut all violence, especially horror and fantasy violence - Robocop alone was shorn of six minutes (!), when it was shown theatrically here. The film censorship board objected to the gloriously over-the-top shoot' em up in the "Danny Boy" scene and tried to cut it down. However, the distributor of the film sued the government-run board, on the grounds that this was art - and won! Norway has now almost no film censorship, other than a ratings system, which is extremely lenient (Jackass Forever has a 12 year rating).

Well, I've seen Miller's Crossing at least 20 times through the years, and for the life of me I don't know what was cut.
J

JohnRice said:
Well, I've seen Miller's Crossing at least 20 times through the years, and for the life of me I don't know what was cut.
Click to expand...

The most notable ommission I keep hearing about is the line "Jesus, Tom" after Tom (Gabriel Byne) hits Frankie (Mike Starr) with a chair. About 9 seconds into this clip:

This is up on caps-aholic. FWIW I can't see any difference between the Criterion and previous blu. Criterion has some additional extras

All this hand-wringing about re-editing is just typical internet twaddle: it didn't remotely alter the experience negatively for me. The picture quality is identical to the Fox blu-ray, but the new 5.1 soundtrack sounded lovely - I ordered the CD soundtrack because of it. And I enjoyed the extras on the Criterion disc, with the exception of the interview with the Coens, because I found the interviewer so off-putting to look at.
J

titch said:
All this hand-wringing about re-editing is just typical internet twaddle: it didn't remotely alter the experience negatively for me.
Click to expand...

Well, that's nice for you, I suppose. Personally, I never thought there was anything wrong with the movie in the first place that needed "fixing," so I fail to see the point of the Coens re-editing the film now.

The ommission of the "Jesus, Tom" line in particular is baffling. Repetition of that phrase was clearly a deliberate running joke throughout the film. The line was perfectly delivered, and shows that the fight between these two men was nothing personal, just business. Even though Frankie was sent into the room for the specific purpose of beating Tom up, they were still friends. Tom was supposed to suck it up and take his punishment, and then everything would go back to normal. By striking back at Frankie, he hurt the big guy's feelings. Frankie was just doing his job, after all. Tom took it too far by hitting him with the chair. It's a terrific and very meaninful character beat.

I don't have the release yet, so maybe this language is clearly stated on the package, but if not, going forward Criterion should make it clear their version is a newly-released, newly-edited director-approved edition.

For some long-term fans, it may even be a major selling point. However the purists will know they need to hold onto the previous released blu-ray.

Reviewing this now. Loved the film, not sure I ever saw the whole thing before. Disagree with the negative comments about the interviewer. She’s well informed and a pleasure to see dig in to deep cuts.
You must log in or register to reply here.