Modern day vampire stories weren’t unique to the genre when American International Pictures presented Bob Kelljan’s Count Yorga, Vampire in 1970, but this simple, straightforwardly told vampire tale proved quite popular at the time (Dark Shadows featuring a similar aristocratic if somewhat reluctant vampire was one of the biggest hits on daytime television which had to have had impetus for this film's success) with its earnest performances and decently mounted, low budget production. Yes, there are cheats in the plotting, and the tone is more moody than scary, but Count Yorga, Vampire holds up rather well as it nears its golden anniversary. 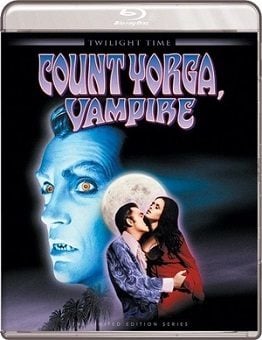 Always craving new nubile young ladies for his vampire chamber, Count Yorga (Robert Quarry), under the guise of a medium holding a séance to contact the spirit of his dead lover and the mother of Donna (Donna Anders), intrigues her and her friend Erica (Judith Lang) enough for them to seek him out later. That doesn’t sit well with the boy friends of either young lady, Michael (Michael Macready) or Paul (Michael Murphy). Yorga immediately begins draining blood from Erica, and her physician Dr. Hayes (Roger Perry) despite some initial disbelief discerns that she’s under the spell of a bloodsucker, but it takes some heavy convincing to bring either Michael or Paul to his side. But Yorga is more than a match for their schemes, and Hayes and Paul become really desperate when both Erica and Paul go missing.

Written and directed by Bob Kelljan (the film’s original title The Loves of Count Iorga, Vampire with its original running time is used for this Blu-ray release) the movie does much with very little by playing the melodrama very straight and filming the scenes with no excessive pomp and a fairly small blood quotient until the last reel (and even then it’s still quite restrained for a vampire film). True, some of the characterizations as written are pretty threadbare (puncture marks in her neck, a drastic loss of blood that requires a transfusion, and a girl friend who’s feasting on the household cat, and Paul still can’t believe there is anything supernaturally wrong with Erica?), and the ending is pretty much a cheat (it took several sessions to turn Erica into a vampire; why didn’t it work that way with Donna?), but there’s a decided lack of campy outrageousness here, and director Kelljan does stage a couple of neat jump scares that do take one by surprise. Splendid character actor George Macready supplies bookended narration for the film, but it doesn’t seem really necessary. Despite the small budget, the Count’s mansion is quite luxurious and expansive; it’s only in the corpse-effects that the lack of funding becomes really noticeable.

Robert Quarry gives an elegant, understated performance exuding an appealing sophistication mixed with disdain for the grubby humans who have the effrontery to think they can outwit him. Little wonder that this became his best known role which he reprised a year later in a sequel. Michael Murphy and Roger Perry, both real pros, acquit themselves nicely, too, with Perry especially doing a good job standing his ground against the Count in a particularly memorable face-off. Fine but a bit less impressive are the two principal ladies Donna Anders and Judith Lang as well as producer Michael Macready who also plays Michael. The rather cryptic role of Yorga’s assistant/gatekeeper Brudah is played by Edward Walsh, creepy looking but a part that should have been more fleshed out (I went through the entire movie thinking he must be the werewolf we keep hearing howl at the moon). On the other end of the scale, both Erica Macready as a nurse and Julie Conners as Dr. Hayes’ bedmate are spectacularly bad actresses really lowering the professionalism of the movie during their brief appearances.

The film’s original theatrical aspect ratio of 1.85:1 is faithfully rendered in this 1080p transfer using the AVC codec. Sharpness is usually good to excellent (plain enough to see clearly the make-up contours on Robert Quarry’s face) with only an odd shot here and there that seems soft. Color is strong with richly hued saturation levels with reds being especially vibrant but never to the point of blooming. Skin tones for the human beings are quite realistic. Black levels, however, suffer pretty badly with mostly milky black levels which don’t do the many nighttime scenes any favors. There is also a fair amount of speckling (sometimes heavier than others), but nothing anywhere comparable to Scream and Scream Again’s dust storm. The movie has been divided into 24 chapters.

The DTS-HD Master Audio 1.0 sound mix betrays the film’s miniscule budget though the mix here certainly gets the job done with a minimum of aural artifacts (only a scene or two with some low-level hiss present). Dialogue has been well recorded, and the spare but workably creepy Bill Marx music and the atmospheric sound effects give the film a very reasonable amount of spooky ambiance.

Audio Commentary: as with Scream and Scream Again, film historians Tim Sullivan and David Del Valle have a lively and animated good time talking about the film and their friendships with star Robert Quarry.

My Dinner With Yorga (13:04): Tim Sullivan’s long ago interview with star Robert Quarry is recreated with Sullivan playing himself and David Del Valle reading the transcript of Robert Quarry’s answers to Sullivan’s questions.

Tribute to Robert Quarry (45:59): Fangirl Radio welcomes guest Tim Sullivan who gives an animated interview and interplay about the life and career of Robert Quarry.

Cultists will find a lot to like with Count Yorga, Vampire on Blu-ray from Twilight Time. There are only 3,000 copies of this Blu-ray available. Those interested should go to www.screenarchives.com to see if product is still in stock. Information about the movie can also be found via their website at www.twilighttimemovies.com or via Facebook at www.facebook.com/twilighttimemovies.

Gonna give this a watch for the first time over the next few days. Looking forward to it.
You must log in or register to reply here.