The World’s Favorite Toys Are Back in the Adventure of a Lifetime! 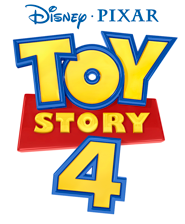 Extras include all-new deleted scenes, conversations with the talent and filmmakers sharing the most memorable moments and characters and much more! 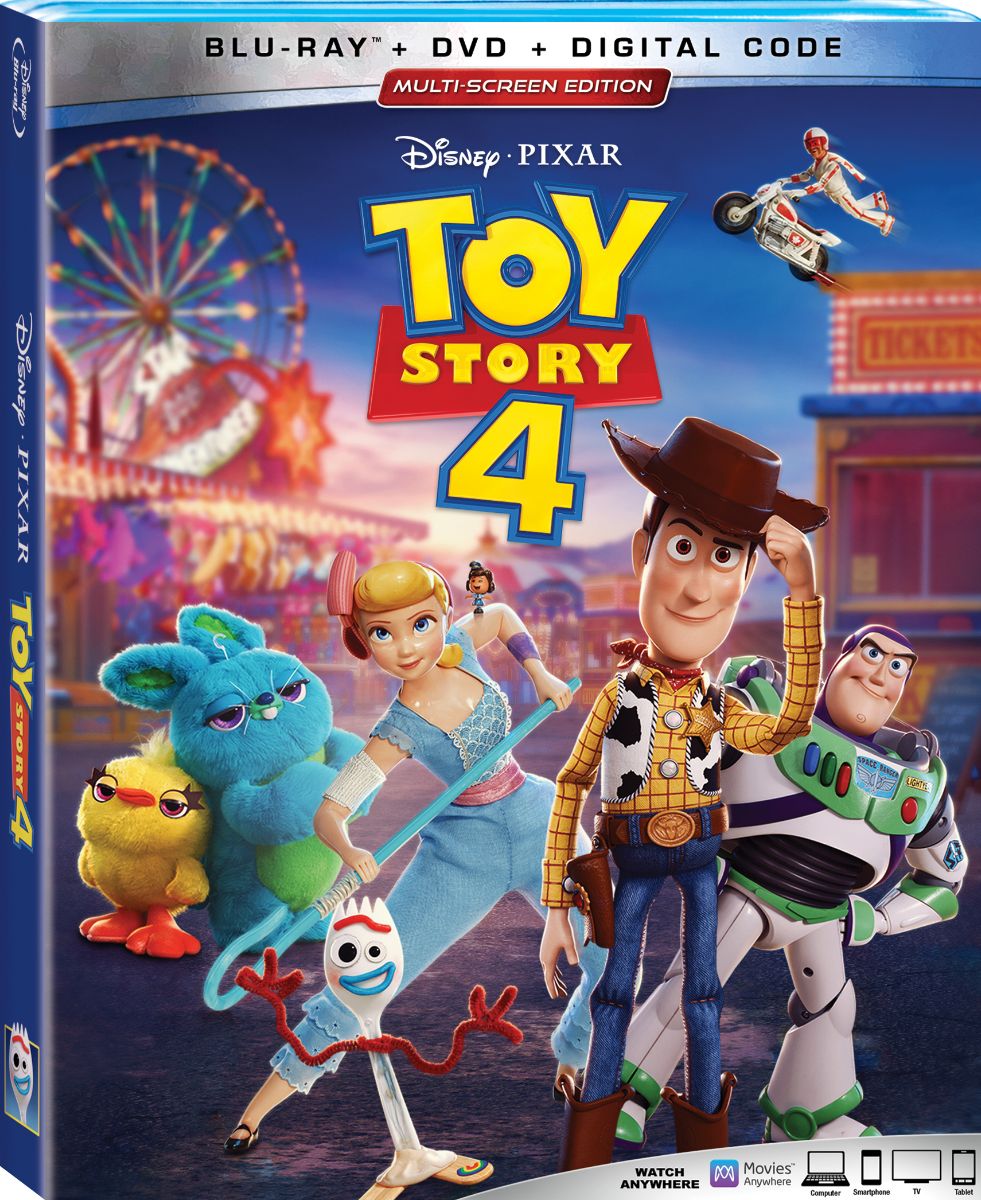 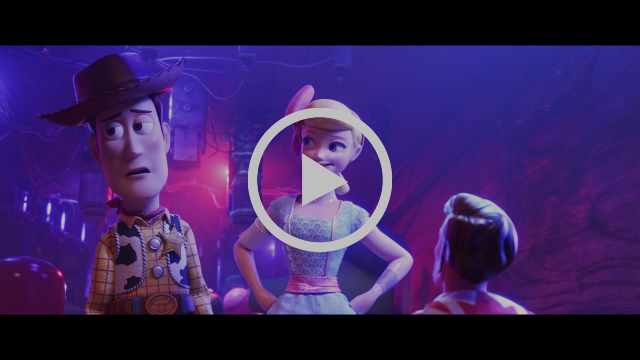 
BURBANK, Calif. (August 22, 2019) — This summer, Disney and Pixar’s “Toy Story 4” took audiences on a hilarious and heartwarming road trip with Woody, Buzz Lightyear and the whole gang, earning a 98 percent critics rating on Rotten Tomatoes and more than $1 billion at the global box office. Packed with old friends and new faces, the fourth film in the beloved Toy Story series, which leads Woody to an unexpected fork in the road, arrives home on Digital in 4K Ultra HD™, HD, and Movies Anywhere Oct. 1, and on 4K Ultra HD™, Blu-ray,™ DVD Oct. 8.

Fans who bring home “Toy Story 4” will be treated to over an hour of bonus features celebrating the film’s iconic characters, Pixar’s filmmaking team and the legacy of “Toy Story,” which began as the world’s first fully computer-animated feature film released nearly 25 years ago. Extensive extras includes deleted scenes such as an alternate ending, an all-new featurette with an endearing look back on Woody and Buzz’s legendary friendship throughout the years; entertaining studio stories shared by members of the Pixar team; a nostalgic look back at the creation and first storyboard screening of “Toy Story” with filmmakers; and the pioneering efforts of Pixar artists who created the sets, characters, look and feel of the original film and much more.

In “Toy Story 4,” Woody (voice of Tom Hanks) has always been confident about his place in the world, and that his priority is taking care of his kid, whether that’s Andy or Bonnie. So, when Bonnie’s beloved new craft-project-turned-toy Forky (voice of Tony Hale) calls himself “trash,” Woody decides to teach Forky how to embrace being a toy. But a road-trip adventure, including an unexpected reunion with his long-lost friend Bo Peep (voice of Annie Potts), shows Woody how big the world can be for a toy. In addition, carnival prizes Ducky (voice of Keegan-Michael Key) and Bunny (voice of Jordan Peele) bring a new level of fun to the film.

The must-own, fourth installment in the Toy Story series will be packaged several ways to ensure families get the most out of their in-home entertainment experience. “Toy Story 4” arrives home a week early on Digital 4K Ultra HD™, HD and SD with two exclusive extras including a deleted scene, “Bonnie’s Playtime”. A physical copy of the film is available as a 4K Ultra HD™ Combo Pack (4K Ultra HD, Blu-ray, and Digital Code), a Multi-Screen Edition (Blu-ray, DVD and Digital Code) and a single DVD. Fans who wish to relive all four Toy Story adventures may opt for a Digital bundle, which is available for pre-order.

“Toy Story 4” is directed by Josh Cooley, and produced by Mark Nielsen and Jonas Rivera. Andrew Stanton, Lee Unkrich and Pete Docter are executive producers, and Stanton and Stephany Folsom wrote the screenplay. Longtime “Toy Story” collaborator Randy Newman composed the score and wrote two new original songs, “I Can’t Let You Throw Yourself Away,” performed by Newman, and “The Ballad of the Lonesome Cowboy,” which is performed by Chris Stapleton for the end credits.

One of my favorite movies of the year!

I wonder how many other press releases will go out as D23 progresses
BBY just put up preorders for 101 Dalmatians, Sleeping Beauty and Maleficent for 9/24

Cool. I wasn't expecting this one until November, which is Pixar's usual release window. Can't wait to get it.

There are going to be shorts on Disney+ starring Forky and another one about Bo Peep's life in between leaving Andy's house and when Woody meets her again in this film. These have been announced officially and I think they might be there at launch. I'm not surprised that they are not being included on this disc, but I think they should be included on this disc as they are direct extensions of the story in this film. It's unfortunate that Disney's desire to promote Disney+ (which, for the record, I do expect to use) is going to prevent this disc from being as complete as it should be. At least what is there sounds like it's good.

As usual, I renew my objection to digital-exclusive bonus features, which should not exist as everything should be put on the disc. But I'm glad to see they are putting the audio commentary on the disc itself, which to me is the most important supplement.

Will there be a 3D release?

Johnny Angell said:
Will there be a 3D release?
Click to expand...

I don't see any reason to expect one. The last Pixar title to receive a 3D release domestically was Finding Dory in 2016.

Johnny Angell said:
Will there be a 3D release?
Click to expand...

Outside the US and Canada. Only a couple places listing it so far, but I expect others within a few weeks

Yep, Amazon UK has the 3D Blu-ray listed already, for whatever that's worth.

It’s disappointing that even Pixar movies are no longer getting the 3D treatment.

Johnny Angell said:
It’s disappointing that even Pixar movies are no longer getting the 3D treatment.
Click to expand...

It's just not a format that Disney's U.S. home entertainment division wants to support anymore. I don't think it has anything to do with which division of their company made the movie or how successful it was. Endgame was significantly more successful than Toy Story 4 on a gross basis and that didn't get a domestic 3D release either. It's certainly extremely unfortunate for 3D fans, but this is Disney's new policy, and there is no logical reason why Pixar (while an extremely important and valuable brand for Disney) should be exempt from their policy.

Of course, their policy of shunning 3D and not giving customers that option after spending years promoting it isn't logical either, but you see what I mean.

And I don’t want to support Disney’s US division anymore. I have the 3D box set of the first 3 movies (the first 2 of which technically aren’t supposed to be in 3D), I won’t downgrade to 2D for the 4th one.
D

I ordered Avengers Endgame in 3D from Amazon UK, as I have many others. I have Toy Story 4 3D in my cart with a release date of 10/21/19. Where there is a will there is a way.

A deleted scene from the Blu-ray:

I watched this last night on UHD. Picture quality was superb and sound was very good.

But for me, it ranked below the third and second entries in the series. I loved Duke Caboom and Forky, but I wish the animators had done a lot more with the Combat Carls, especially the one dressed in white that seemed to be on the outside looking in (a very tender backstory could have been an extra dose of sentiment for the tale).

For some reason, I didn't tear up or get a lump in my throat with Woody's farewell, maybe because I wasn't in favor of his decision, but I did appreciate the animators showing us what Woody and Bo were doing with their lives afterwards.

Matt Hough said:
I wish the animators had done a lot more with the Combat Carls, especially the one dressed in white that seemed to be on the outside looking in
Click to expand...

Did you watch to the very, very, very end of the credits? It takes until the very final frame, but Carl gets a happy ending.

Jake Lipson said:
Did you watch to the very, very, very end of the credits? It takes until the very final frame, but Carl gets a happy ending.
Click to expand...

It must have happened after the Disney castle. That's when I stopped. I'll revisit tonight!

Matt Hough said:
It must have happened after the Disney castle.
Click to expand...

Yep. No spoilers, but you need to watch all the way through the end of the Pixar logo. It's literally the very last frame, which is why I was the only audience member who remained to see it in the theater all three times I saw the movie.
Last edited: Oct 28, 2019

Jake Lipson said:
Yep. No spoilers, but you need to watch all the way through the end of the Pixar logo. It's literally the very last frame, which is why I was the only audience member who remained to see it in the theater all three times I saw the movie.
Click to expand...

Watched it tonight, and it was indeed worth going back for. Gave me a VERY warm feeling inside. A perfect way to end the film for folks like me whose hearts always go out to the underdogs.

Just noticed the blu ray is $13 and the 4K $20 on Amazon. $13 for a “recent” release, hell, any Disney release is a good price.
You must log in or register to reply here.