Bates Motel: Season Two stuffs its episodes onto Blu-ray with this 2-Disc set. The continuing series gets another solid presentation in the picture and sound department, with a small group of bonus features included to garnish the package. The series continues to be an interesting and well-produced one, and it would seem that its fan base is growing with each season, even though it should be clear to viewers where this story is ultimately headed. Who would have thought that an origin story for Norman Bates would make for years of good television? 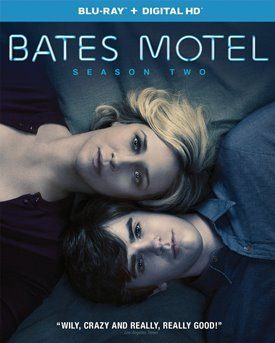 Bates Motel: Season Two brings the continuing A&E series to disc with a collection that includes all 10 episodes of the second season. This continues to be a great-looking and well-produced series, full of interesting levels of detail and elements of multiple periods. As the show continues forward, the writers are clearly finding many interesting sidetracks and potential villains to help build the conflicted story of Norma Bates (Farmiga) and her son Norman (Highmore). As with the first season, the series contrasts the internal problems of the Bates’ family with a succession of odd threats from the even crazier people in the town around them. If anything, the second season is actually stronger than the first one, with the oddness of White Pine Bay continuing to resemble a bit more of the locality of Twin Peaks...The Blu-ray set includes all 10 episodes of the second season in 1080p HD picture and DTS-HD MA 5.1 sound, along with a few deleted scenes, a brief featurette, and two “After Hours” segments originally aired on A&E after the season premiere and season finale.The home video release of this set came on October 7, giving viewers plenty of time to pick up this show before the 3rd season premiere hits the airwaves in March 2015.

Bates Motel: Season Two is presented in a 1080p AVC transfer that continues to shows off a lot of detail, from the wardrobe to the Canadian locations seen in the series. This is an intentionally dark series, with plenty of scenes taking place either at night or in dark, creepy places. The picture here provides some appropriately inky blacks, while still continuing to display detail wherever possible.

Bates Motel: Season Two is presented in an English DTS-HD Master Audio 5.1 mix (at an average 4.0 mbps) that continues to be as aggressive and immersive as the first season’s mix.

DISC BY DISC:As I regularly do with TV series sets, I will describe what can be found on each disc, in order. The deleted scenes are all presented in high definition picture (VC-1 encoding) and 2.0 sound.There are chapters to each episode, but they are not in any menu, so you wind up needing to jump through the episode blindly to get back to a specific point.DISC ONE:Episodes: Gone But Not Forgotten, with deleted scenesShadow of a Doubt, with deleted scenesCalebCheck-Out, with deleted scenesThe Escape ArtistTotal Deleted Scenes Timing for Disc 1: 9:01Disc 1 also contains:Bates Motel: After Hours – Season Two Premiere (21:15) – Following the airing of the show’s season premiere in March 2014, A&E offered this promotional interview program. It’s the same sort of thing that AMC has done with Breaking Bad in the past, where you see members of the cast and crew being offered compliments and softball questions. If you’re a fan of the series, this is a fun opportunity to see the cast out of makeup, hair and familiar accents. Just don’t expect them to answer anything particularly deep or revealing about the series…DISC TWO:Episodes:Plunge, with deleted scenesPresumed Innocent, with deleted scenesMeltdownThe Box, with deleted scenesThe Immutable Truth, with deleted scenesTotal Deleted Scenes Timing for Disc 2: 10:42 Disc 2 also contains:Bates Motel: After Hours – Season Two Finale (21:102) – Following the airing of the show’s season finale in May 2014, A&E offered this bookend to the interview special they had done for the season premiere. Origins of a Psycho: Inside Bates Motel (12:32) – This short featurette covers the usual territory for a BTS piece on a running TV series. Short interview soundbites are intercut with footage from the set and clips from the series. This will be fun for fans of the show, but there’s nothing particularly deep being discussed here.Ultraviolet – An insert in the packaging offers an authorization code for downloading and streaming Ultraviolet copies of the episodes.

Bates Motel: Season Two is a good collection of the second season of the A&E suspense drama. At this point in the show’s development, it has progressed a bit beyond the hit-and-miss material of the first season and can make for genuinely interesting viewing. The Blu-ray set provides a solid high definition presentation, along with a small amount of bonus material that will appeal to the show’s loyal fans. One wonders how much longer this series can continue to go, given where this story must eventually land, but for the moment, they’re definitely enjoying a fertile period.