22 Jump Street, the sequel to the highly successful and very funny 21 Jump Street, comes to Blu-ray in a typically excellent transfer from Sony. It also is packed with extras. The equation here is a simple one - if you enjoyed 21 Jump Street, you will be thoroughly pleased with the sequel. 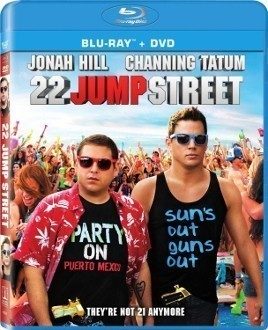 I'm the first person in my family to pretend to go to college. - Jenko

Schmidt (Jonah Hill) and Jenko (Channing Tatum) are back on the case in 22 Jump Street, and it looks like this is becoming a franchise which may have a few more films in it. Those who have not seen 21 Jump Street probably should watch it before taking on the sequel. For one thing, the sequel opens with "Previously on 21 Jump Street," 40 seconds of clips which give away the entire plot of the earlier film. In addition, a good portion of the humor in the sequel presumes (requires?) familiarity with 21 Jump Street.

It is not easy to make a successful sequel to a hit comedy. The Hangover Part II was a hit at the box office but was excoriated by critics for being nothing more than a darker version of the original. In 22 Jump Street our heroes are told to "Do the same thing as last time," but the film cleverly spins much of what happened in the first film in a different direction.

It will not be a spoiler to mention that 21 Jump Street begins with Schmidt and Jenko in high school, where Schmidt is the class nerd and Jenko is a stereotypical dumb jock. Several years later their paths cross in police academy. Schmidt is smart but physically lacking, whereas Jenko is fit and athletic but struggles with classroom work. They decide to put their old differences aside and team up. After graduation they are assigned patrol duty in a city park, where they make a drug bust but fail to read the perp his Miranda rights. Deputy Chief Hardy (Nick Offerman) decides to exile them to an undercover squad located in an old Korean church located at 21 Jump Street. There they come under the command of Captain Dickson (Ice Cube), who tells them that they are going back to high school to find out who is dealing drugs to the students.

In 22 Jump Street we find Schmidt and Jenko conducting what they believe is a drug investigation on the streets. When they move in to make an arrest they are, to put it mildly, surprised by what they find. A very funny chase ensues, the perps get away, and the boys are once again called on the carpet in front of Deputy Chief Hardy, who in a very funny scene assigns them to once again work undercover. However, 21 Jump Street has reopened as a functioning Korean church (called "Aroma of Christ Church), but conveniently there is an even bigger abandoned Vietnamese church across the street (called "Resurrection of the Holy Spectacle"). Captain Dickson is still in charge, and he is riding high following a big raise and a budget increase. He tells them that they are going to pretend to be college students at MC State, why a new drug known as "WhyPhy" has led to the death of one student. Schmidt and Jenko have to find the supplier and put him out of business.

The concept is kept fresh by the fact that 22 Jump Street is actually poking fun at itself. While it basically follows the formula of the first film, it introduces some interesting new characters and assigns a significant amount of role reversal to Schmidt and Jenko. On another level, it also is a very effective buddy film, and the relationship between Schmidt and Jenko - two polar opposites who humorously pass themselves off as brother - is interesting. Jonah Hill and Channing Tatum are fine as the leads, and Rob Riggle and Dave Franco have unbilled cameos which reprise their roles in 21 Jump Street. Ice Cube is profanely funny as Captain Dickson, and there is nice supporting work by Peter Stormare, Wyatt Russell, Amber Stevens, and Jillian Bell. There also are uncredited cameo appearances by Seth Rogen, Queen Latifah, and Bill Hader. Be sure to stick around through the entire closing credits for some teasers about what might be coming next in this franchise. Directors Phil Lord and Christopher Miller have teamed up again to provide viewers with a very enjoyable 112 minutes of entertainment.

This is a typically superb Blu-ray transfer from Sony. The 2.40:1 1080p video is encoded with the AVC codec and is properly framed. Detail is excellent, black levels are solid, shadow detail is very good, and contrast is strong. Colors and flesh tones are accurate and solid, with no blooming or bleeding in evidence.

The 5.1 DTS HD-MA audio is superb. Every word of dialogue is clear and understandable, and there are action scenes involving crashes and gunfire which bring the surround speakers and subwoofer alive. The musical soundtrack includes numerous songs and they are given a wide and pleasing soundstage.

Add up the running times of the extras on this Blu-ray release and you have the equivalent of another feature film.

There is a commentary track with directors Phil Lord and Christopher Miller and the film's stars, Jonah Hill and Channing Tatum.

"The Perfect Couple of Directors" is a featurette about the two directors.

This Blu-ray includes no fewer than 22 deleted and extended scenes, several of which are quite amusing. An added bonus is that the deleted scenes are accompanied by an optional directors' commentary.

"Everything is Better in College" is a featurette which examines how Jenko and Schmidt make the transformation from police officers to college students.

"Janning and Chonah" looks at the working relationship of Jonah Hill and Channing Tatum.

"The Perfect Line: Ad-libbing on the Set" shows how improvisation added to the film's fun.

"Don't Cry Yet: The Mr. Walters Prison Scene" shows improvisation during the scene of Mr. Walters (Rob Riggle) being questioned while behind bars.

"The Dramatic Interpretation of 22 Jump Street" shows how the film might have looked if it had been made as a straight police drama.

"Joke-a-Palooza" is a montage of jokes which did not make the final cut.

There are four "Line-o-Ramas" which show the actors trying out different bits of dialogue.

"Zook and McQaid's Football Tape" is the full football tape which the two characters made for college football scouts. Only a small portion of it is seen in the film.

"Jenko Split" is a funny little bit which cannot be described without giving away the punch line.

The Blu-ray includes trailers for The Interview, Sex Tape, The Equalizer, When the Game Stands Tall, and Home Sweet Hell.

Also included is a DVD of the feature and an UltraViolet code.

Good review. I saw this at my local discount theatre with low expectations and having not seen 21 Jump Street and ended up enjoying it a lot. I like the original series and I don't usually like comedic takes on dramatic series but this one worked.
You must log in or register to reply here.