For its target audience, Barbie & Her Sisters in A Puppy Chase will offer a lot of adventure and will guarantee repeat viewings so crammed is the narrative with plot incidents and dazzling use of color and sound.

Since 1959, Barbie has been an international success for the Mattel Corporation, and her influence has spread from just dolls and their accessories to lunchboxes, clothes, bed linen, games, books, and, naturally, home video products. Barbie & Her Sisters in A Puppy Chase is not the first made-for-home video creation in which the plucky heroine and her siblings have had adventures with rambunctious canines. This one offers the kiddie crowd the four girls on their own in an exotic location solving a series of problems with spirit and resolve teaching viewers gentle life lessons while keeping their eyes and the ears filled with lots of color and bouncy music.

Arriving in Hawaii to take part in a dance competition is Barbie’s (Erica Lindbeck) youngest sister Chelsea (Alyssya Swales) along with her sisters Skipper (Kazumi Evans) and Stacie (Claire Corlett) and their four pups Taffy (Chelsea Miller), DJ (Taylor Dianne Robinson), Rookie (Bronwen Holmes), and Honey (Elizabeth Irving). Barbie insists the girls come with her to see the dancing horses owned by Marco (Alex Barima) and Vivian (Evans Johnson) taking place in Banyan Forest on the other side of the island from their hotel and the site of the dance competition. Though she’s sure they can see the show and make it back in time for Chelsea’s dance contest, a series of unfortunate accidents plague the girls and force them to use every resource at their command not to lose heart as the island throws continual roadblocks in their way.

Amy Wolfram and Kacey Arnold have written a series of misadventures for the girls that help them see different parts of the island while they must resort to sleeping under the stars, enduring a fierce rainstorm, dealing with missing maps, coping with an RV that has a flat tire and runs out of gas, arriving at washed out roads, and any number of other setbacks to their getting Chelsea to that dance show, all the while preaching patience and not giving up despite adversity aimed squarely at their target audience. Meanwhile the puppies have their own rollicking adventures when they get separated from their owners and end up enjoying the hospitality of celebrated show dog Archibald (Mark Oliver) who belongs to the horse owner siblings Marco and Vivian. So with four different female protagonists each with her own personality, four different puppies, a spoiled show poodle, and three dancing ponies, you have to think the deck is solidly stacked in favor of cute for the children who are the obvious focus of this made-for-home video adventure. Director Conrad Helten fits in some exhilarating moments, too: the girls at one point ride zip lines across a wide chasm and later mount the ponies to make daring jumps across a washed out road with crumbling asphalt making each jump of wider depth and increased danger. The animation is on par with Mattel’s other home video franchise Monster High with colorful but simplified CG animation that stresses movement rather than intricate details.

The voices all fit the characters quite nicely. Erica Lindbeck’s Barbie is full of pluck and positivism and not the exaggerated valley girl of the Toy Story franchise. Kazumi Evans’ Skipper is the grumbler of the group who gets sick easily and is doubtful things will work out for the best. Of the animals, Mark Oliver walks away with the movie in his scenes as the pampered Archibald. Brenda Crichlow plays with a twinkle in her voice three different triplet sisters who always manage to show up on the island when the girls need her the most.

The movie is framed at 1.78:1 and is presented in 1080p resolution using the AVC codec. Sharpness is always first-rate in the transfer obviously coming straight from the digital realm, and color is bright and brilliant making even a simply animated Hawaii seem like a kind of paradise. There is a bit of banding to be seen in a couple of shots, but contrast has been nicely maintained, and black levels are excellent (one of the lessons in the film involves locating the North Star which requires the night sky to be nicely inky). The film has been divided into 12 chapters.

The DTS-HD Master Audio 5.1 sound mix is more sophisticated than one might expect. While most of the dialogue has been placed in the center channel, there is some directionalized dialogue at specific moments which is a delightful addition to the mix. The background score and the big climactic production number “Live in the Moment” gets excellent spread through the fronts and rears. Other atmospheric effects might have been given a bit more spread into the rear channels, but it’s an effective soundtrack for a made-for-video feature.

“Live in the Moment” Music Video (2:57, HD): clips from the film accompany the big song number performed by much of the cast at the end of the movie.

Barbie Dreamtopia “Wispy Forest” (6:21, HD) and “Rainbow Cove” (6:14, HD): colorful but cruder animation is used for these two shorts featuring Chelsea’s make-believe world for herself and her sisters

For its young target audience, Barbie & Her Sisters in A Puppy Chase will offer a lot of adventure and will guarantee repeat viewings so crammed is the narrative with plot incidents and dazzling use of color and sound.

Pardon me while I hit the rest room.

Dick said:
Pardon me while I hit the rest room.
Click to expand...

Upstairs and to the right

B-ROLL said:
Upstairs and to the right 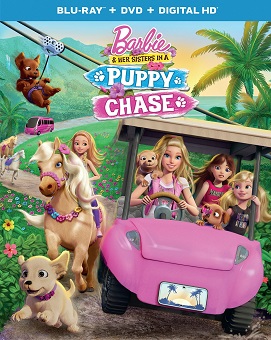