Woody Allen’s Café Society, another of his bittersweet ruminations on romantic roads not taken, echoes with memories of triumphs past, particularly Annie Hall and Manhattan, two films with similar love triangle scenarios.

Woody Allen’s Café Society, another of his bittersweet ruminations on romantic roads not taken, echoes with memories of triumphs past, particularly Annie Hall and Manhattan, two films with similar love triangle scenarios. Café Society is wonderfully nostalgic for a long-ago era, late 1930s New York and Hollywood, and Allen certainly makes the most of those locations in fashioning his story, but devoted fans of the legendary filmmaker can’t help but notice the themes he’s visited many times before done deftly yet again but with not anything particularly new to say.

Eager to try a different way of living from his New York roots, Bobby Dorfman (Jesse Eisenberg) heads to Hollywood where his Uncle Phil Stern (Steve Carell) is one of the biggest agents in the business. He finds some menial odd jobs around the office for Bobby to do which introduces him to office assistant Vonnie (Kristen Stewart) with whom Bobby becomes infatuated. She’s involved with a married man whom she won’t identify, but it inevitably comes to light that it’s their boss Phil with whom she’s having an affair. Phil isn’t in a hurry to divorce his wife (Sheryl Lee) of twenty-five years, but when he learns that Vonnie is seriously considering going back to New York with Bobby to set up house in Greenwich Village, he goes through with the divorce and claims Vonnie. Bobby returns heartbroken to New York where he becomes involved in the nightclub business with his racketeer brother Ben (Corey Stoll), making their Manhattan nightspot the chicest and most sought after watering hole on the East Coast and marrying Veronica (Blake Lively) who bears him a daughter. Then Phil and Vonnie pass through New York on the way home, and the old feelings resurface for the two former lovebirds.

Director Woody Allen’s screenplay (which he himself narrates with Jesse Eisenberg serving as his on-screen surrogate) offers another of the Oscar-winning writer-director’s love triangles/quadrangles where decent people meet and fall for other decent people while other decent people connected to them become innocent bystander-victims of the pent-up feelings which seem to consume their partners. The solutions arrived at here don’t really advance in any way the endings of Annie Hall, Manhattan, Husbands and Wives, The Purple Rose of Cairo, or a few other Allen comedies, and in that sense, the movie may seem something of a disappointment, but the fresh-faced, eager cast of players invests in the witty repartee as much as Allen’s earlier casts did (though sometimes with not quite the sparkle as before), and the warm nostalgia and great period allure of the Hollywood of the 1930s draws us invitingly in. Cinematographer Vittorio Storaro bathes the Hollywood scenes in a golden glow (a dinner scene illuminated by candlelight is one of the more magical moments in an Allen opus) while the Manhattan nightclub owned by the brothers Dorfman has a more surface glitz that isn’t quite as appealing as the Tinsel Town-set sequences, something Allen might likely not have had in mind since he waxes poetic on the soundtrack continually about the romantic allure of Broadway and the Manhattan skyline. A subplot concerning Ben Dorfman’s underworld ties doesn’t get the development it deserves (we mostly see him rubbing out a succession of guys who threaten his empire in one way or another), and the Bronx-set homelife of the Dorfman clan (with the mother played by Jeannie Berlin and the dad by Ken Stott) brings to mind the domestic scenes in Radio Days but without quite the same nostalgic charm and sharp humor. Allen does use a succession of Rodgers and Hart songs (with occasional additional tunes by Harry Warren and Jerome Kern) to set the bittersweet tone of his piece, effective both nostalgically and temperamentally.

As a younger stand-in for the now older Woody, Jesse Eisenberg can’t be topped, adept as he is in speaking with Woody’s cadences and rhythms, but the growth from naïve waif looking for work to sophisticated man-about-town nightclub entrepreneur never quite registers, Eisenberg’s youthful looks betraying him from seeming more experienced in the later scenes in the movie. Neither of the two leading ladies, Kristen Stewart as Vonnie or Blake Lively as socialite Veronica, has quite the indelible, quirky charm and vulnerability of Allen’s famous leading ladies of yesteryear Diane Keaton and Mia Farrow. They’re both acceptable but no more in their respective roles as lover and wife. Steve Carell’s high powered agent Phil Stern is quite believable even if the actor’s improvisational gifts are buried beneath the romantic angst his character is burdened with. Corey Stoll, who stole much of Allen’s Midnight in Paris as Ernest Hemingway, has less to do here, but he’s always a welcome presence. Jeannie Berlin as the mother and Sari Lennick as the sister both have the choicest of lines of the Dorfman homebodies. Anna Camp as an inexperienced prostitute shares one of the movie’s funniest scenes with Jesse Eisenberg on his first night in Hollywood making one think the movie is going to be funnier than it actually ends up being.

The film is framed at 2.00:1 and is presented in 1080p resolution using the AVC codec. Gorgeous is the word for this transfer as sharpness is exceptional, and color is luscious and often breathtaking. Yes, skin tones take on a burnished aura in some of the lower lit Hollywood scenes, but, overall, flesh tones are believable and appealing, and color values overall are rather scrumptious. Black levels are excellent, and contrast has been applied with surety making for a most consistent picture. The film has been divided into 16 chapters.

The DTS-HD Master Audio 5.1 sound mix only uses the rear channels for slight ambiance. A visit to Malibu places echoes of the waves in the rears, and some of the orchestral strains of Rodgers and Hart also find their way to the rears though the front channels are by far the stronger and more frequently used. Dialogue has been masterfully recorded and has been placed in the center channel.

On the Red Carpet (2:13, HD): brief interviews with Blake Lively, Kristen Stewart, and Parker Posey at the film’s New York premiere find the actresses praising their director’s smart and funny dialogue and direction.

There is much that is familiar with the story, characters, and themes of Woody Allen’s Café Society, but that doesn’t make it any less entertaining, and some of the location photography is so gorgeous that the high definition treatment of the film is a must for fans of the director or stars. 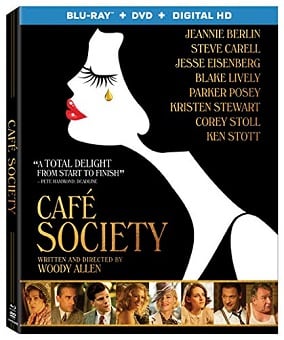