Mindless sci-fi action thriller is bigger but no better than its predecessor. 3 Stars

The aliens are back and they’re more numerous, more insidious, and more lethal than ever before in Independence Day: Resurgence.

The aliens are back and they’re more numerous, more insidious, and more lethal than ever before in Independence Day: Resurgence. Writer-producer-director Roland Emmerich has revisited the sci-fi action film that was a monster hit for him twenty years ago, but despite meeting up with old friends while becoming acquainted with a cast of new, younger characters, Independence Day: Resurgence pretty much hits the same old beats as before. Newer technology gives the film a huge, explosive look and feel, but the feeling of déjà vu persists in nearly every frame of this sporadically entertaining adventure.

In the twenty years since American know-how (and an Apple computer) was able to conquer an alien invasion of the Earth, the world has united to prevent any future attacks by utilizing alien technology which survived the war to build safeguards and space-savvy weaponry and lookout posts on our moon and on one of Saturn’s moons to be able to deflect any new alien attack. But the aliens have been busy in the past twenty years, too, and have come armed once again, this time with a mothership 3,000 miles across to drain the Earth’s magnetic core for its own power and with an enormous fleet of warcraft to protect the mothership. Survivors from twenty years previously who had close encounters with the aliens are psychically connected to them, so former President Whitmore (Bill Pullman), scientist David Levinson (Jeff Goldblum) and his father Julius (Judd Hirsch), and astrophysicist Dr. Brakish Okun (Brent Spiner) all receive intermittent signals of the oncoming attack and the hopelessness of any resistance.

With five hands on board taking credit for the screenplay including director Roland Emmerich, Dean Devlin, Nicolas Wright, James A. Woods, and James Vanderbilt, there’s little wonder that the narrative feels splintered with way too many subplots involving both the old and new characters to get the kind of depth needed to warrant their inclusion (without the film running four hours). Learning that a queen alien in control of the entire operation is housed on the mothership, obviously she becomes the target for the human counterattack led by Dylan Hiller (Jessie T. Usher), son of the now-deceased hero played by Will Smith in the first film, and his frenenemy Jake Morrison (Liam Hemsworth), a hotshot pilot involved in a romantic relationship with former President Whitmore’s daughter Patricia (Maika Monroe). The screenplay also allows plenty of time for Jeff Goldblum’s sardonic scientist and Brent Spiner’s quirky Dr. Okun to chew the scenery, too, as they run the war game in their brains while the pilots do their stuff in the skies. As usual, director Roland Emmerich revels in the massive dogfights and wide-ranging destruction of the Earth (Dubai and London get hard hit this time out) and keeps things moving even though the film at just two hours (the original ran almost half an hour longer) seems longer because of the many characters that require some service like Judd Hirsch’s mensch papa (taking charge of a school bus filled with children, many of them orphaned), Travis Tope’s gunner Charlie Miller falling in instant lust with Chinese pilot Rain Lao (Angelababy), and a love interest for Goldblum French scientist Catherine Marceaux (Charlotte Gainsbourg) as well as some ocean pirates paid $100 million to keep an eye on the core drilling being done by the aliens (a subplot that should have seemed prime for the cutting room floor).

All of the younger players do well enough with their cardboard roles, but the script really doesn’t give Liam Hemsworth, Maika Monroe, Jessie Usher, and Travis Tope much of a chance to delve deeply into their skin deep characters. On the other hand, the director has focused quite a bit on the more veteran members of the cast giving sizable screen time to Jeff Goldblum’s typical natterings as Levinson, Brent Spiner’s eccentric behaviors as Dr. Okun, and Bill Pullman as the now deeply disturbed President Whitmore who makes a miraculous recovery for the film’s climactic act. Sela Ward as current President Lanford and William Fichtner as General Adams make much of their limited screen time. Judd Hirsch is as irritating this time out as he was before ignoring the obvious and often seeming like he’s a few brain cells shy of a full load as the meddlesome if well-meaning Julius Levinson.

The film’s theatrical aspect ratio of 2.39:1 is faithfully rendered in this 1080p transfer using the MVC/AVC codec. Sharpness is never in question, quite a feat when so much of the film requires blue screen CG backgrounds that blend seamlessly with live action foregrounds. Color is vivid and true throughout with realistic skin tones. Contrast has been consistently applied for an involving screen presence, and black levels are truly black. The movie has been divided into 24 chapters.

The 3D conversion applied to the original photography results in scenes with often impressive depth. Rooms and laboratories on Earth seem enormous in scale in 3D, and these long and wide performing spaces allow the director to place people and objects that fill the screen left to right and top to bottom with everything in clear focus. The film opens with a ride through space that also features wonderful depth and immersion in 3D. But opportunities for forward projections are never attempted. A stop sign, for example, knocked off the school bus at a crucial moment comes right at the camera, but never intrudes into the eyes of the viewer as we might have seen in a 3D film of the old school. When the best forward projection is a spearhead in the logo of one of the production companies shown at the top of the film, fans of pop-out are in for a frustrating experience.

The DTS-HD Master Audio 7.1 sound mix offers exactly what one would expect from a 21st century sci-fi disaster/action movie. Split atmospheric effects never cease giving each of the speakers a busy time of keeping up with the constant barrage of sound sent to them. Dialogue has been well recorded and mostly resides in the center channel with an occasional bit of directionalized dialogue sent through headphones. The music by Harald Kloser and Thomas Wanker gets excellent placement in the fronts and rears.

The 3D disc contains only the film. All of the bonuses are contained on the 2D Blu-ray disc enclosed in the case.

Audio Commentary: producer-writer-director Roland Emmerich goes through his paces of informing us about characters’ feelings and motivations, backstories of characters and plot that aren’t clear in the screenplay, and assorted behind-the-scenes information about how certain shots were handled.

Deleted Scenes (8:24, HD): eight scenes which can be viewed separately or together and with or without commentary from Roland Emmerich.

The War of 1996 (5:11, HD): for those who don’t remember the previous film, this faux news report for fictional network UWN describes the events of the previous film and the formation of the ESD – Earth Space Defense, an agency headed by David Levinson.

Trailers/Spot Ad (5:18, HD): two theatrical trailers and one TV spot ad can be played separately or in montage.

Independence Day: Resurgence is a perfectly acceptable popcorn picture that offers an abundance of action at the expense of in-depth characterization and a well-constructed narrative. The Blu-ray release offers reference picture and sound though the 3D conversion is full of depth but with very little in the way of a well-rounded use of the process. 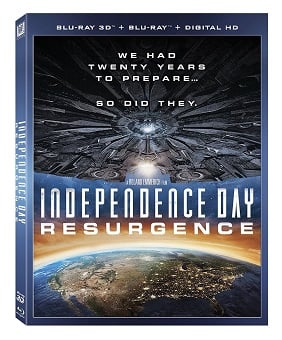