Posted on May 28, 2019 by Robert Harris
With the exception of Batman & Robin, the final film in the non-dark Batman series, there really isn't 4k information to be ferreted. HDR adds a bit of nicety 4 Stars

One cannot say that WB is not being totally transparent with their distribution plans for the 4k 1989-97 Batman series.

They arrive shortly as four separate films, and then, on 17 Sept, as a boxed set.

The difference is in the pricing. Currently a $42 price tag for each title, streeting at $25, with the set listing a $90, which presumably will be discounted.

But it’s a nice set.

With the exception of Batman & Robin, the final film in the non-dark Batman series, there really isn’t 4k information to be ferreted. HDR adds a bit of nicety. And Dolby Atmos helps with the price of admission, but don’t be expecting to be blown away by a 4k look, as you won’t find it.

What you get for your upgrade dollars, are four films that nicely mimic the appearance of 35mm prints. These are beautifully rendered 4k discs, accurately representing the original look of the films. All shot on fillum, and not digital – what they made is what you get.

And that’s a good thing, with nary a problem in sight.

For fans, and there are more than attempting to collect the complete Dean Martin, the only question should not whether to upgrade, but whether to wait for the boxed set, and a small discount. 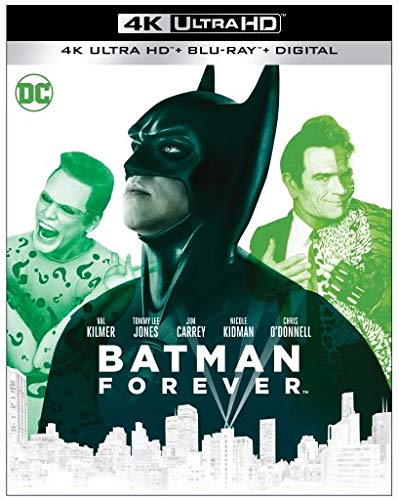