Forum List What's new Dark Style Change width
Log in Register
What's new Search
Menu
Log in
Register
Navigation
Install the app
More options
Dark Style
Close Menu
Posted on May 28, 2019 by Josh Steinberg
You are using an out of date browser. It may not display this or other websites correctly.
You should upgrade or use an alternative browser.
Unnecessary remake is given a quality presentation on disc. 3.5 Stars

The 1966 remake of Stagecoach, while not in the same class as John Ford’s original, is an enjoyable enough diversion, but lacks the verisimilitude of the 1939 version.

Remaking one of the finest westerns of all time, at a moment when the western genre was losing steam in Hollywood, was a thankless task, although as the saying goes, someone had to do it. Director Gordon Douglas, working from a paint-by-numbers script by Joseph Landon, was that someone. Douglas fills his widescreen frame with colorful locations and even more colorful actors, but it’s a case of the whole adding up to less than the sum of its parts. Even if one sets aside memories of the original film and judges this version of Stagecoach on its own merits, the film’s execution fails to convey the excitement and urgency that its story demands.

Lethargically paced at 114 minutes, the film is also hindered by a series of performances which seem to be coming from vastly different movies. Faring best in smaller roles are Slim Pickens and Keenan Wynn, two pros who are always a pleasure to watch, and whose sheer skill and understanding of the genre enable to them to deliver credible performances. Van Heflin is similarly reliable. On the other end of the spectrum, Bing Crosby seems as though he’s trying to alert everyone that he is Acting with a capital “A”. Ann-Margret is lovely as ever in an underwritten role. But it’s Alex Cord who’s stuck in the worst position; his choices demonstrate that he’s smart enough to know he’s not John Wayne, but the screenplay nonetheless requires someone like Wayne to make the whole enterprise work. Everyone else more or less falls in that middle spot that runs the gamut from competent to uninspired.

With the advantages of both color and widescreen photography, one area where this remake should have improved over the original is verisimilitude, but oddly, the advances in cinematography only serve to heighten how unreal the film actually feels. Interiors feel hopelessly stage bound, and exterior photography somehow feels more 1960s than 1860s. It feels more of the time it was made than the time it was set in, which surely was not the intention of the filmmakers. There is one brief sequence, about halfway through, where the movie seems to transcend all of these noted limitations and shortcomings. As the coach’s occupants travel down a narrow mountain road, at night and in the mud and rain, there’s a real tension and energy. It’s not enough to make up for everything else, but for the briefest moment, it seems as if it might be.

Stagecoach is presented in its original aspect ratio of 2.35:1. The image is clear and stable, with scant evidence of age or wear. Colors appear natural, with good replication of skin tones that subtlety express the differences in how the characters have lived. Exterior photography, while stylistically seeming more modern than the time period being portrayed, is nonetheless quite pleasing visually.

The film’s monaural audio is presented in a lossless DTS-HD MA track. The good: dialogue is well recorded and easily discernible, and balanced well within the mix. The not-so-good: Jerry Goldsmith’s energetic score at times seems to lack in fidelity, occasionally sounding thin and weak. This is likely an accurate reproduction of the limitations of the original mix. It’s by no means a bad audio track, but falls short of being reference quality.

Audio Commentary with Film Historians Lee Pfeiffer and Paul Scrabo – Newly recorded for this release, Pfeiffer and Scrabo are fans of the film, and make an enthusiastic case in its favor as they chat informally throughout the film. While the track starts off strong, and ends with a touching dedication to the late Nick Redman, there are several stretches in the middle where the conversation lags.

Booklet – Julie Kirgo’s insightful essay is included along with reproductions of Norman Rockwell’s gorgeous paintings from the film’s production.

The 1966 remake of Stagecoach can’t hold a candle to the original, but for fans of the newer production, this new Twilight Time release offers a high quality version of the film. The isolated score track reveals hidden nuances in Jerry Goldsmith’s great score, and the newly recorded audio commentary offers a worthwhile defense of the film itself.

Thank you for your fine review. TBH, I never liked this film even though I watched it as a kid during its theatrical run. My main problem with the film is the same one you noted in your review. The lead actor just doesn't work for me. If it was Clint Eastwood in that role or even Steve McQueen it would've worked better for me. I've seen this film version about three times over the years, but haven't watched it in decades. Perhaps, I'll give it a try again.

Robert Crawford said:
Thank you for your fine review.
Click to expand...

Thank you for your kind words!

I watched the movie four times while in the review process (twice on its own, once with the isolated score, once with the commentary) and I was hoping each time that I’d like it more than I did. And each time, I came to the same conclusion.

Hell, it would have been cool if they had Elvis do that role. It probably would've made a lot more money with Elvis and Ann-Margret. TBH, if it wasn't for a certain female actress/singer, I wouldn't even be mildly interested in this film.

IMDB has this film released with 4-track sound. Of course IMDB has lots of mistakes so, it might have never had a stereo track.

Watched this last night. Didn't expect much with all the bad reviews but I thought it was an OK western. Of course no where near as good as the original. I'll watch again with the commentary.
You must log in or register to reply here. 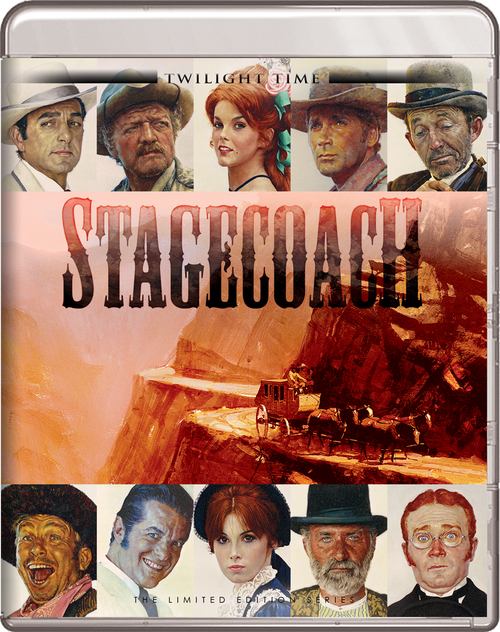