Featuring actors (Virginia Madsen, Sherilyn Fenn, Scott Coffey, Paul Feig, Richard Cox) and crew members (Jay Roach, Tim Doyle, Bob Ducsay) who would go on to bigger and better things, Zombie High is a movie most have probably left off of their resume.

Andrea (Virginia Madsen) has received a scholarship to Ettinger Academy as one of its first female students, much to the dismay of her jock boyfriend Barry (James Wilder). Upon arrival, she quickly meets a handsome, older man, Philo (Richard Cox), who shows a romantic interest in her and later turns out to be her biology professor (creepy). She also meets her roommates, sexpot Suzi (Sherilyn Fenn) and southern bell Mary Beth (Clare Carey), and hallmates Emerson (Paul Feig) the class clown and the rebellious Fellner (Scott Coffey). These seem to be the only normal people on campus, with her other classmates speaking in monotone and only interested in academia. As the movie meanders through its overly long 91 minute running time, Andrea eventually discovers that the faculty of Ettinger Academy are Civil War veterans who have been surgically implanting crystals in the skulls of its students to not only control their behavior but make them willing to provide the necessary serum to keep the faculty alive.

The zombies of Zombie High are not the walking dead type, but the “lobotomized” students who may as well be undead. And that is one of many problems with the movie (particularly after the opening title sequence featuring drawings of the Romero-type zombies). Too often, the screenplay shows its hand to the audience too early, deflating any suspense or scares. The jokes and humorous situations fall flat more often than they even partially succeed. The movie also asks the audience to believe that Madsen and her classmates are young enough to be high school students (she was 26 at the time the movie was filmed), but asking us to believe they are college age would even be pushing it. According to the liner notes, the movie was filmed on the campus of USC during winter break using students as extras and crew members. Unfortunately, it shows, as the film has a very amateurish quality to it, with very soft cinematography (assisted by Camera Operator Jay Roach), disjointed editing, and an embarrassing sound mix (assisted by Sound Editor Bob Ducsay) that often drowns out key dialogue, to name just a few.

The 1080p transfer provided to Shout! Factory is all over the map. While it retains the film’s original theatrical aspect ratio of 1.85:1, colors go from drab and muted to bright and well-saturated, and contrast can go from murky to blown out from scene to scene (sometimes from shot to shot). Detail is soft overall, with a few exceptions where detail appears well-defined. This all likely has more to do with the source material than the transfer itself, considering the production background.

The DTS-HD Master Audio 2.0 mono track is a mess, but again, like the video, this has more to do with the source material than the transfer itself. Viewers will find themselves riding the volume control all too often as they increase to hear dialogue, then get blown away by overly loud music passages that then drown out the dialogue. Thankfully, the disc includes subtitles in English.

Liner Notes: A quick history on the production can be found on the inside cover.

DVD Copy: The film in 480p with Dolby Digital 2.0 mono and the theatrical trailer.

Fans of Virginia Madsen, Sherilyn Fenn, and Paul Feig will likely find this as more of a curiosity piece to see their favorite actors early in their careers. There’s not much else going for Zombie High, and a rental would be recommended prior to purchase. 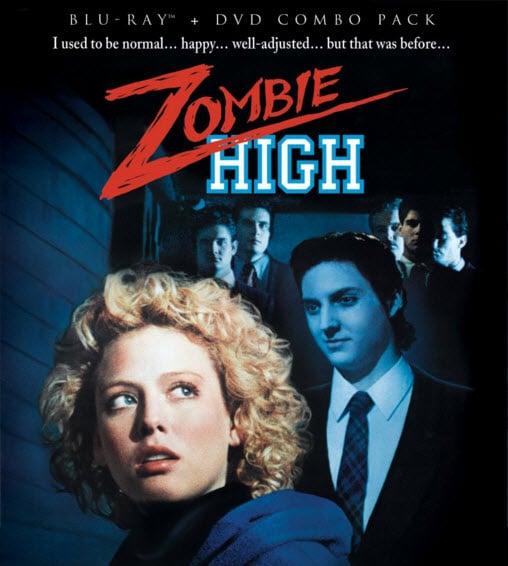