Ray McCarey’s It Happened in Flatbush is a pleasant little programmer with nifty performances from a host of familiar character actors acting a well-worn, predictable story of a sports team inching its way toward a title.

Ray McCarey’s It Happened in Flatbush is a pleasant little programmer with nifty performances from a host of familiar character actors acting a well-worn, predictable story of a sports team inching its way toward a title. There are all of the familiar formulas that make for a winning sports movie: a down-on-their-luck team sparked to life by a plucky down-and-outer himself, the rookie under pressure to deliver, a romance that threatens to implode, and so on. But it’s not the overly standardized plot that will win you over but rather the great array of players who give their all even for such banal material.

After missing the catch that cost the Brooklyn Dodgers the pennant, Frank Maguire (Lloyd Nolan) was given the name “Butterfingers” by the unhappy fans and management staff and served his walking papers. Now, seven years later with the Dodgers scraping the bottom of the barrel, team owner Mrs. ‘Mac’ McAvoy (Sara Allgood) decides Maguire’s pluck and spirit as a manager are just what the team needs to jolt them back to life. Frank signs the contract, but before he can get started on his efforts to rebuild the team, Mrs. McAvoy has a heart attack leaving the team to her heirs who couldn’t care less about baseball. Kathryn Baker (Carole Landis), the wealthy society heiress who speaks for the family, is looking to sell the team to the highest bidder, but Maguire persuades her to give him a chance both with the team and with her, an offer Kathryn accepts. The two enjoy success both professionally and personally, but as the Dodgers rise close to claiming the pennant, pressure come to bear that may tear both the team and the couple apart.

The screenplay by Harold Buchman and Lee Loeb offers a very familiar take on a variety of sports movie clichés, and the league pennant of course comes down to the last pitch in the last inning with the last batter with everything on the line. While the film does offer a compelling portrait of the rabid passion of the Brooklyn Dodgers’ fans, the script is also very naïve about the game of baseball (the series of two losses the team suffers after getting so close to winning the title gets blamed strictly on the manager; how about all of those scoreless innings where the team’s players aren’t doing THEIR jobs?), and it doesn’t paint Brooklyn fans in a very favorable light to turn on their rookie pitcher (George Holmes) after he walks the first batter he faces and who gives up on the team and its management staff so quickly (have they forgotten how effectively he battled in court to save a devoted fan – Matt McHugh – from jail for jumping onto the field and belting the umpire or how he brought the team back from the brink of being sold off – which did happen years later – by producing a winning squad?) And the script manages to build in a tedious romantic tiff that upsets the smoothly running engine, a misunderstanding that could have been settled by a phone call. Still, there’s a fun success montage, and there are some entertaining moments in various locker rooms well directed by journeyman director Ray McCarey: everything from Mrs. McAvoy storming around through one in the early going while the naked men dive for towels to later pep talks to the team that allow actor Lloyd Nolan to be at his best.

Nolan does give the best performance in the film, very earnest and good natured with a dry way with a putdown and not afraid to be hard on himself when he knows he’s in the wrong. Carole Landis falls victim to the Fox beauty machine with those overelaborate hairstyles that were a specialty for their female stars, but she’s an agreeable love interest without much else to do except look pretty. Sara Allgood is great as the no nonsense Mrs. McAvoy, and William Frawley is always a pleasure as the team representative. Robert Armstrong gets to play the heel again as sports reporter Danny Mitchell who doesn’t like Nolan’s Frank Maguire and who goes out of his way to run him and the team down, though he rather fades from view once Maguire is reinstated late in the movie and isn’t made to eat crow to the viewer’s satisfaction. Scotty Beckett makes a plucky batboy, and Jane Darwell and Roger Imhof are comforting presences as Maguire’s always supportive parents. James Burke has a lot of fun with the much maligned umpire Shaunnessy.

The transfer is framed at its original theatrical aspect ratio of 1.37:1. While sharpness is very good and the grayscale more than adequate (even striking in some scenes though it’s clear some sequences come from lesser quality elements than most of the movie), there is evidence that work has been done on the film. There are no reel change cues, and while there are dust specks and dirt, they don’t predominate. Naturally, some of the stock baseball footage varies in quality, but most of it looks more solid than one would expect. The interlaced transfer does have some trouble with some of Jane Darwell’s polka dot dresses that flash a bit and shimmer during movement. The movie has chapters every ten minutes so this movie has been divided into 8 chapters.

The Dolby Digital 2.0 sound mix is decoded by Dolby Prologic into the center channel. Volume levels are about right (some may prefer the volume a little softer), and there has been obvious work done on the soundtrack since age-related problems like hiss or crackle are minimal. Dialogue comes through clearly, and the music and sound effects blend together nicely and never overpower the actors.

It Happened in Flatbush is a fairly routine baseball picture, but its heart is in the right place, and it offers a score of great character actors enjoying themselves immensely in this solid little programmer. The Fox MOD release does justice to the film’s modest qualities. 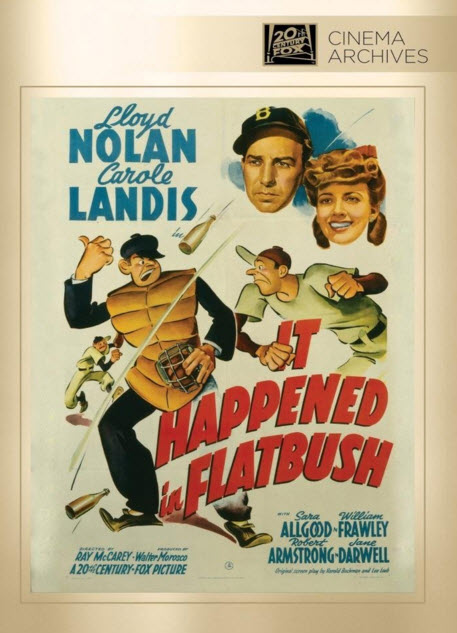