Forum List What's new Dark Style Change width
Log in Register
What's new Search
Menu
Log in
Register
Navigation
Install the app
More options
Dark Style
Close Menu
Posted on February 9, 2016 by Todd Erwin
You are using an out of date browser. It may not display this or other websites correctly.
You should upgrade or use an alternative browser.
A nostalgic trip back to 1980s TV horror. 3 Stars

Starting life as a TV movie pilot for a possible anthology series, Nightmares is short on scares but elevated by its talented and then-unknown cast under the direction of veteran Joseph Sargent. Scream Factory brings this cult favorite from Universal to Blu-ray for the first time.

Nightmares is a pretty straightforward horror anthology created and written by Christopher Crowe (the first three segments, anyway), and directed by Joseph Sargent (MacArthur, The Taking of Pelham One Two Three). The movie begins with Terror in Topanga, in which an escaped killer is terrorizing and murdering the canyon community. Lisa (Cristina Raines) is a chain smoker, and late one night she runs out of cigarettes. Her husband (Joe Lambie) forbids her to leave the house with the killer on the loose. She puts their child to bed, and proceeds to sneak out of the house, driving down into town to the corner liquor store to pick up a carton of cigs, but discovers a nearly empty tank on her way home. After finally finding a gas station still open, a peculiar looking attendant (William Sanderson) offers to fill up her tank. Is he the killer? We soon find out as the story quickly concludes.

The film then cuts to the next segment, Bishop of Battle, where J.J. (Emilio Estevez) is obsessed with video games, so much so that he hustles other players at the downtown arcades. After escaping a hustle gone bad, he returns home to the mall arcade, hoping to make it to the mythical level thirteen of Bishop of Battle. He fails to do so during normal operating hours, returning home to his parents, who are upset with his poor grades and school attendance and grounding him until things improve. Of course, J.J. sneaks out through his bedroom window and breaks into the arcade. He successfully makes it to the thirteenth level, and finds himself fighting for his life against vector-graphic spaceships, all leading to a very predictable conclusion.

The last of the Christopher Crowe penned segments, The Benediction, tells the tale of MacLeod (Lance Henrickson), a priest who has lost his faith, until he encounters a 4×4 pickup truck that tries to kill him as he leaves his parish. The segment is somewhat derivative of two much better features from Universal, Duel and The Car, but is aided by a dedicated performance by Henrickson.

Nightmares closes with the often unintentionally silly Night of the Rat, written by Jeffrey Bloom, about a family in the suburbs who find they may have a rat infestation on their hands. Claire (Veronica Cartwright) hears noises in the attic one night, and wants to call an exterminator. Her husband, Steven (Richard Masur), finds exterminators to be a waste of money, and offers to place traps in the attic later that night after work. A rat is captured that night, and Steven disposes of it. And that’s when things start to get worse for Claire and her daughter, Brooke (Bridget Andersen). Their cat is found half eaten under the house. Large holes are found behind cabinets in the kitchen. Claire becomes terrified and calls the local exterminator, Mel Keefer (Albert Hague), who tells her that her house is being “haunted” by a giant rat from German folklore. Steven tells Mel to leave his family alone and to stop putting ideas into his family’s heads. This all leads to a showdown between the family and the giant rat (thanks to some rather unconvincing 1980s TV-level visual effects).

One of the problems with Nightmares is that there is no wrap-around story that is crucial to most anthology films (these could have easily been someone reflecting on their own nightmares in a therapy session). Instead, Nightmares plays like a collection of short films, feeling a bit disjointed as it moves from story to story. It would also help if the stories had some real scare moments in them. Even more strange, the film received an R rating from the MPAA, even though there were very few reshoots after NBC backed out from airing the pilot, and the final film is fairly tame even by 1980s standards.

Nightmares arrives on Blu-ray from Scream Factory, offering the viewer a choice of watching the film in its 1.78:1 theatrical aspect ratio or a side-cropped 1.33:1 television aspect ratio.

The 1.78:1 would be the preferred viewing choice, as it gives the film a more cinematic feel, with more information on the sides of the frame, which makes sense since most TV movies from this era, especially those at Universal, were filmed with the prospects of an international theatrical release. That being said, this is a rather drab transfer, with an overall softness and muted but consistent colors. There doesn’t appear to be any artificial sharpening or smoothing of the image. Contrast is passable, although there are some issues where detail is severely lacking due to the weak black levels.

The DTS-HD Master Audio 2.0 mono track serves its purpose, and nothing more. Dialogue is clear and understandable, never getting lost in the music or sound effects. Fidelity and dynamic range are adequate, never sounding distorted.

Audio Commentary with Executive Producer Andrew Mirisch and Actress Cristina Raines: Moderated by Shaun Chang, Mirisch and Raines talk about the genesis of the project, working with the actors, and Raines provides some insight on writer and producer Christopher Crowe (her husband).

Fans will like the insight provided on the commentary track, which will put to rest the rumors that Nightmares was nothing more than unaired episodes of the anthology series Darkroom (it wasn’t, and you can tell which Blu-ray reviewers took the time to listen to the commentary and which did not).

Very excited about this release. It's one I was checking on now and then. I saw when it was first listed as an upcoming blu ray! LOVE the one centered around the arcade game.
You must log in or register to reply here.

Today at 4:45 AM
Robert Crawford 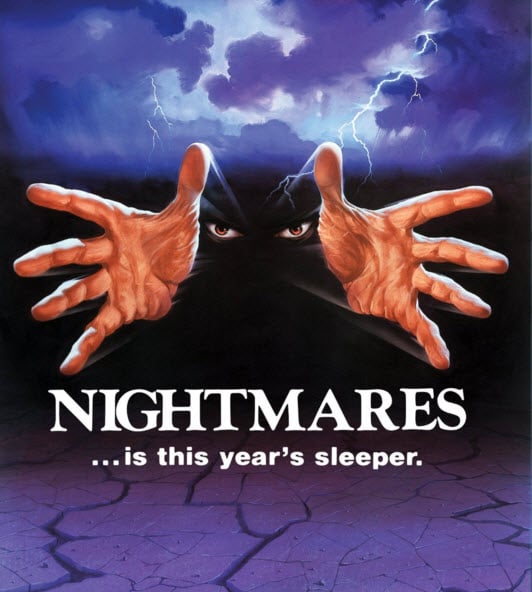