Forum List What's new Dark Style Change width
Log in Register
What's new Search
Menu
Log in
Register
Navigation
Install the app
More options
Dark Style
Close Menu
Posted on October 12, 2016 by Matt Hough
You are using an out of date browser. It may not display this or other websites correctly.
You should upgrade or use an alternative browser.
Entertaining X-Men saga that may be overlong and underwritten for the story it's telling 4 Stars

Not as ambitious a production as Days of Future Past nor as emotional as First Class, Bryan Singer’s X-Men: Apocalypse still manages to stack and shuffle its multiple X-Men characters who must yet again face a force determined to bring the known world to the brink of extinction.

Not quite as ambitious a production as Days of Future Past nor as emotional as First Class, Bryan Singer’s X-Men: Apocalypse still manages to stack and shuffle its multiple X-Men characters who must yet again face a force determined to bring the known world to the brink of extinction. Vividly produced with the emotional resonance and sense of family that often goes AWOL in other comic book adaptations, X-Men: Apocalypse is an agreeable superhero franchise entry.

Buried alive more than five thousand years before in ancient Egypt right after having invulnerability and everlasting life transferred to him from one of his mutant subjects, the world’s first known mutant En Sabah Nur (Oscar Isaac) is resurrected in 1983 and is completely displeased with the world in its current condition. Gathering together an army of “four horsemen” loyal to his cause, he chooses mutants Storm (Alexandra Shipp), the angry combatant Angel (Ben Hardy), warrior-like Amazon Psylocke (Olivia Munn), and Magneto (Michael Fassbender). The latter, having tried normal life in Poland with a wife and young daughter only to have them slaughtered when his identity becomes known, once again becomes an enemy of mankind. Professor Charles Xavier (James McAvoy) in trying to get inside the head of Nur alerts him to his own unique telepathic abilities making Professor X the mutant En Sabah Nur wants most to have his abilities transferred to him. Before that happens, however, Nur goes about exploding the nuclear weapons of every country on the planet who possess them and bringing down all the world’s great cities so he can once again make Cairo the center of the world and the center of his power.

Basing his screenplay on one of the franchise’s most popular villains, screenwriter Simon Kinberg focuses a great deal of attention in this X-Men outing on the younger students training to master their abilities, so we get the chance to see the early anguish of great characters like Scott Summers/Cyclops (Tye Sheridan), Jean Grey (Sophie Turner), Nightcrawler (Kodi Smit-McPhee), Ben Hardy’s Angel, and Sophie Turner’s Storm. The outlooks of the two principal characters, Magneto’s cynical anger and Professor X’s eternal optimism, haven’t changed, so the interest in this story comes with which side the various young mutants wind up on and what they do to accomplish their goals. After a dazzling introduction in the previous film, Quicksilver (Evan Peters) shows up again in another bravura sequence, more elaborate but lacking the freshness of the kitchen spree in the last outing as he rescues a school full of students and faculty as it explodes into a fireball. Scott Summers’ frantic handling of his newly erupting power holds one’s attention in both its comic and dramatic extremes, but Jennifer Lawrence’s Mystique seems almost an afterthought in this outing with her constantly downplaying her persona as a mutant role model. With these current X-Men films all prequels to the original trilogy, it’s no surprise that En Sabah Nur/Apocalypse doesn’t succeed in taking over the world (the climactic showdown between him and Charles Xavier is represented as both a physical and mental confrontation, neither of them having quite the impact we’re expecting and being something of an anticlimax). Director Bryan Singer must cover a lot of ground in this mammoth entry in the series, and while the film plays a bit long, there’s no denying that some of the action scenes, especially those with the fascinating Nightcrawler, are among the highlights of the series.

Having wonderful dramatic actors like Michael Fassbender and James McAvoy in these leading roles assures that the dramatic moments will play true and not artificial or phony. Fassbender in particular gets the juicy scenes in Poland struggling to live life normally and be a loving husband and father but having it taken away from him all because he did something noble. These continual betrayals by mankind help us understand why he’s so bitter by the time he ages into the Magneto that Ian McKellen played so beautifully. Nicholas Hoult once again makes a sturdy and reliable Hank McCoy/Beast, and Lucas Till makes a welcome return as Alex Summers. All of the young mutants are portrayed with buoyancy and bravura by Evan Peters, Tye Sheridan, Kodi Smit-McPhee, Alexandra Shipp, and Ben Hardy. Oscar Isaac is a most formidable villain, and Josh Helman as the bullying if cowardly Col. Stryker makes a firm impression as well. There’s also a surprise visit from an old friend that is a welcome treat.

The film’s theatrical aspect ratio of 2.40:1 is faithfully rendered in this 2160p transfer using the HEVC codec. Reference quality from beginning to end, sharpness is exceptional with tons of detail to be seen in the costumes and body features of the various mutants (Mystique’s black-dotted skin is more vivid than ever before). During the Auschwitz sequence, one would swear he was looking through a clear pane of glass onto the scene. Color is rich and vibrant and skin tones vary by the person, just like in real life and always appearing realistic. Contrast has been wisely used, and even scenes loaded with CG effects blend in beautifully with live action actors. The use of HDR is seamless throughout but with highlights in various skin tones and surfaces that give the entire image a dimensional pop. The movie has been divided into 28 chapters.

The Dolby Atmos sound mix (decoded on my equipment with the Dolby TrueHD 7.1 core) is a dynamic, reference-quality achievement. The sense of envelopment throughout is palpable from the opening sabotaged pyramid collapse through the climactic showdown against Apocalypse with atmospheric effects being beautifully layered through all available channels. The LFE channel gets major use in this encode as well, and John Ottman’s music (and a succession of 1980s pop tunes to fit the period of the movie) get excellent spread through the soundstage. Dialogue has been professionally recorded and has been placed in the center channel.

The UHD disc in the set contains only the audio commentary as a bonus feature. All of the other bonus features are contained on the enclosed Blu-ray disc which contains the 1080p version of the movie.

Audio Commentary: director Bryan Singer and producer-screenwriter Simon Kinberg share stories about the making of the film spread among Singer’s sometimes irritating habit of describing what’s going on in the movie as we watch.

Deleted/Extended Scenes (28:11, HD): twelve scenes may be watched individually or together in montage and with or without introductions by the director.

Art Gallery: sections on concept art and unit photography can be advanced manually or automatically.

Trailers (7:15, HD): a teaser trailer and two theatrical trailers can be viewed separately or in montage.

A perfectly entertaining X-Men adventure, X-Men: Apocalypse may seem a bit overextended and not always satisfying in its dramatic unfolding and resolution, but fans should enjoy it, and in regards to its home video presentation, the UHD release is reference quality all the way with especially impressive audio that should please anyone looking for a showcase video to impress the neighbors.

At the risk of being "that guy" there was just one thing I wanted to nitpick on from your review:

With these current X-Men films all prequels to the original trilogy, it’s no surprise that En Sabah Nur/Apocalypse doesn’t succeed in taking over the world (the climactic showdown between him and Charles Xavier is represented as both a physical and mental confrontation, neither of them having quite the impact we’re expecting and being something of an anticlimax).
Click to expand...

It seems a pretty common mistake, so I'm wondering if the ending of Days Of Future Past wasn't as clear as I remember it, or if it's just the time from the two year gap between movies that makes memories a little fuzzy. I rewatched all of the older X-Men movies this year before the new one came out so it was probably fresher for me than it was for most.

I assumed Mystique will have a change of heart at some point between now and when we first meet her attached to Magneto in the original movie, but I certainly can't debate you about these timeline things. It's well beyond my brain power to keep one timeline straight, much less multiple ones.

Matt Hough said:
I assumed Mystique will have a change of heart at some point between now and when we first meet her attached to Magneto in the original movie, but I certainly can't debate you about these timeline things. It's well beyond my brain power to keep one timeline straight, much less multiple ones.
Click to expand...

In X-Men: Days Of Future Past (2014), the movie begins in the same timeline that all of those other movies have taken place in. However, when Wolverine travels back through time into the 1970s in Days Of Future Past, he alters history drastically, and everything after 1973 is now different. We see some of that in the movie's epilogue; for instance, Jean Grey and Scott Summers are still alive now. This changing of the timeline allows the filmmakers to make an entirely new series of movies where things don't have to happen exactly as we remember them or as we've been told they happen. Unfortunately, it seems that this wasn't always picked up on by viewers. Like in your review, you note (and I'm paraphrasing here) that the conflict has no suspense because we know they can't die, because it takes place before the original movies and we know all of the characters live to be in the original movies - that was actually part of the point of doing this timeline change. Now we don't know that any of them survive, so it would have been possible for the movie to end with the deaths of any or all of the major characters that appeared in the original "X-Men" movie and it wouldn't be "wrong". Any X-Men movie that comes out after Days Of Future Past, including Apocalypse and next year's Logan, will be in this new timeline and not beholden to anything that happened in any of the six original movies that I mentioned above.

Hope this helps, as you probably figured out, I really enjoy a good time travel story
You must log in or register to reply here.

A Few Words About A few words about...™ X-Men Apocalypse -- in 4k UHD Blu-ray 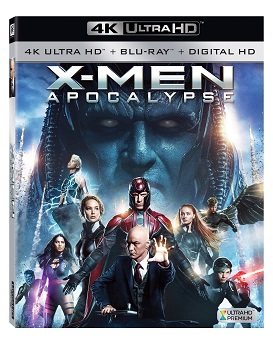