Never has a movie received so much hostility and hatred from the internet, particularly from those who hadn’t even seen it yet, than Paul Feig’s remake/reboot of Ghostbusters. It was as if the pink slime from Ghostbusters 2 had oozed its way on to the internet. So much so that it prompted Joel Stein of Time magazine to write an article How Trolls Are Ruining the Internet, citing this film as one of the examples. Unfortunately, the trolls won out, with a lackluster box office  performance of $226 million worldwide, which is a shame, since it’s a much better movie than most have given it credit for.

After a long day of tours at the “haunted” Aldridge Mansion, tour guide Garrett (Zach Woods) is attacked by the ghost of Gertrude Aldridge. His boss, Ed Mulgrave (Ed Begley, Jr.), goes to visit Dr. Erin Gilbert (Kristen Wiig), a professor at Columbia University who co-wrote a book on paranormal phenomenon many years ago, and asks her to visit the mansion and investigate the incident. Erin has all but forgotten that she had co-authored the book, and being up for tenure, she tracks down her former friend and colleague, Abby Yates (Melissa McCarthy), who is conducting experiments on the paranormal with engineer Jillian Holtzmann (Kate McKinnon) at a technical college. Erin pleads with Abby to take the book down from Amazon, at least until she is accepted for tenure. Abby agrees, provided Erin accompanies them to the Aldridge Mansion to check out the haunting. The three find proof of the existence of ghosts, and when that video proof quickly finds its way to YouTube, the dean of Columbia, Harold Filmore (Charles Dance), promptly fires Erin, who goes back to Abby and Jillian. The three then go to the dean of the Higgins Institute, who didn’t even know that Abby and Jillian were still on staff, and promptly fires them. The three then decide to start their own business of finding and investigating ghosts, taking up residence above a Chinese restaurant, and hire dim-witted Kevin (Chris Hemsworth) as their receptionist. MTA ticket booth operator Patty Tolan (Leslie Jones) encounters a ghost on the subway tracks, and asks the girls to investigate. Although the ghost escapes, the data allows Jillian to devise a trapping device for ghosts. Having lost her job at the MTA over the ghost incident, she joins the three “Ghostbusters” as an expert on the history and geography of New York. After trapping their first ghost at a heavy metal rock concert, they soon learn that a hotel janitor, Rowan North (Neil Casey), is placing devices around the city to summon ghosts in hopes to “break the barrier” and unleash a cleansing of the world by the supernatural as vengeance for being bullied all of his life. When that barrier is eventually broken, it is up to the Ghostbusters to close that portal and save the city.

Rebooting a classic franchise is tricky, and director Paul Feig definitely had his work cut out for him when he accepted the offer to co-write and direct Ghostbusters. Feig has been very successful directing comedies with females as the leads (Bridesmaids, The Heat, Spy), so it should have come as no surprise that he would cast this the way that he did. Melissa McCarthy, as leader Abby, is less acerbic as she’s been in her three previous collaborations with Feig. Kate McKinnon shines in her first leading role as the slightly off Jillian Holtzmann, with her odd stares and mostly improvised lines (Just try saying no to these salty parabolas). Kristen Wiig is fine as the straight woman, Erin Gilbert, perhaps the weakest link among the four women. Leslie Jones was a bit too brash and loud at times as Patty Tolan, but did help give the film its New York tone. The standout, though, is likely Chris Hemsworth as the blank slate Kevin, who manages to steal some of the biggest laughs from his more seasoned comedic co-stars. Look for cameos by Charles Dance as the dean of Columbia, Andy Garcia as the Mayor of New York, and Karan Soni (better known as the cab driver from Deadpool) has some fun as the take-out delivery guy Bennie in a running gag between he and Abby. Ghostbusters isn’t the comedic goldmine that Feig’s previous films were, but it does have some good laughs throughout and this reviewer was thoroughly entertained. Sony has included both the theatrical cut and an extended cut with 18 minutes of additional and extended scenes and alternate takes on this set. The extended cut can be viewed in 4K UHD or 1080p, and the theatrical cut is available in 3D and 1080p 2D. A word of warning – the theatrical cut is the more family-friendly of the two.

As mentioned above, the 4K UHD disc contains only the extended cut of the film, which is a bit of a headscratcher, since seamless branching is available on the format. That being said, Ghostbusters looks terrific in 4K UHD, despite the fact that it was upscaled from a 2K digital intermediate. Colors are more vibrant and natural, detail is noticeably sharper (particularly in closeups and extreme wideshots), and contrast allows for much deeper blacks.

Sony has included the theatrical cut in 3D, and this is probably the preferred method of watching the film, though, as this is one of the best modern-day 3D conversions I’ve seen in a long time. there is a great deal of popout interspersed in the film (the first comes during Erin’s big slime moment in the Aldridge Mansion), often utilizing the full 1.78:1 frame even though the movie proper has been framed at 2.40:1 by extending the 3D effects onto the black bars (although the 2D versions on the discs in this set also include this effect). There is also a sense of added depth, especially during the effects sequences. The 3D is not as prevalent during the more traditional sequences, appearing a bit more flat, but that may have been intentional. There is also a slight drawback to the 3D version, and that is a slightly darker color palette and decrease in contrast, but not enough to detract from your enjoyment. 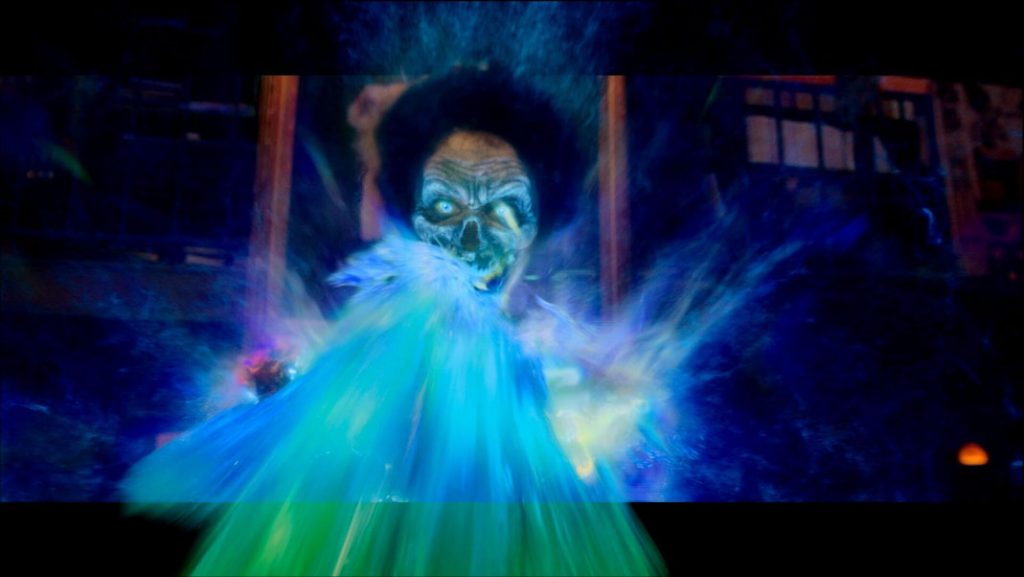 Sony has included a Dolby Atmos track (with a Dolby TrueHD 7.1 core), but only on the 4K UHD disc. This track is reference-quality, with great immersion and use of heights during its scarier moments, even when played back in a 5.1 configuration with additional heights and Pro-Logic IIz enabled. Dialogue is clear and understandable, directed mostly to the center channel with panning effects used where needed. Surrounds are used heavily, with discrete sounds emanating from the entire room during many of the heavier effects sequences, and going gangbusters during the big showdown at the end of the film. LFE is also used extensively, adding a lower end to the film’s use of songs by current pop stars and the various spooky sound effects.

Unfortunately, both the 3D and 2D Blu-ray versions contain only 5.1 DTS-HD Master Audio track (why, Sony, why?) instead of a Dolby Atmos track (or even a 7.1 DTS-HD MA track). It’s still a very active track, with many of the same qualities as the one included on the 4K version, but without any sense of height.

All of the Special Features can be found on the 2D Blu-ray disc.

Writer and Director Commentary: Co-writer Katie Dippold was unable to attend the crew commentary (see below), so the she and Paul Feigrecorded this track on their own, discussing the writing process, casting, how they became involved int eh project, and many of the improvised lines in the film. The track is available on both the theatrical and extended cuts.

Gag Reels (1080p; 15:29): Two gag reels are offered, viewable individually or together with a Play All option.

Deleted Scenes (1080p; 9:22): Four scenes are provided, viewable individually or together with a Play All option. Past Lives, The Big Test, The Breakup, and Where Are You?

Extended and Alternate Scenes (1080p; 21:14): Eleven scenes are provided, viewable individually or together with a Play All option. Erin Walks to Class, Phil & Phyllis, The Duke, The Dean, Bennie & Erin, Protect the Barrier, The Beasts of Mayhem, Casper, Visine, Where’s the Walkie, and Rebecca Gorin.

Jokes A Plenty (1080p; 34:30): Extended variations and improvisations on lines from the film, offered in six segments, viewable individually or together with a Play All option. Free For All, Holtzman Gone Wild, The Patty Show, Kevin Unleashed, The Dean Goes Down, and The Bird.

The Ghosts of Ghostbusters (1080p; 13:57): An EPK piece that looks at the various types of ghosts that appear in the film.

Digital HD Copy: An insert contains a code to redeem a digital copy of the theatrical cut through Ultraviolet that also includes deleted and alternate scenes and a bonus featurette (not included on the disc versions). Those with 4K Sony TVs can get a 4K streaming version if redeemed through the URL on the insert.

Perhaps one of the more polarizing films this year, this reviewer was able to look past the pre-hate from the internet and found an entertaining and enjoyable movie and quite possibly the best 3D conversion of 2016. Kudos to Sony for including the 3D version with the 4K UHD set, but minuses for not including, at the very least, a 7.1 track on the 1080p versions (why no Atmos?). 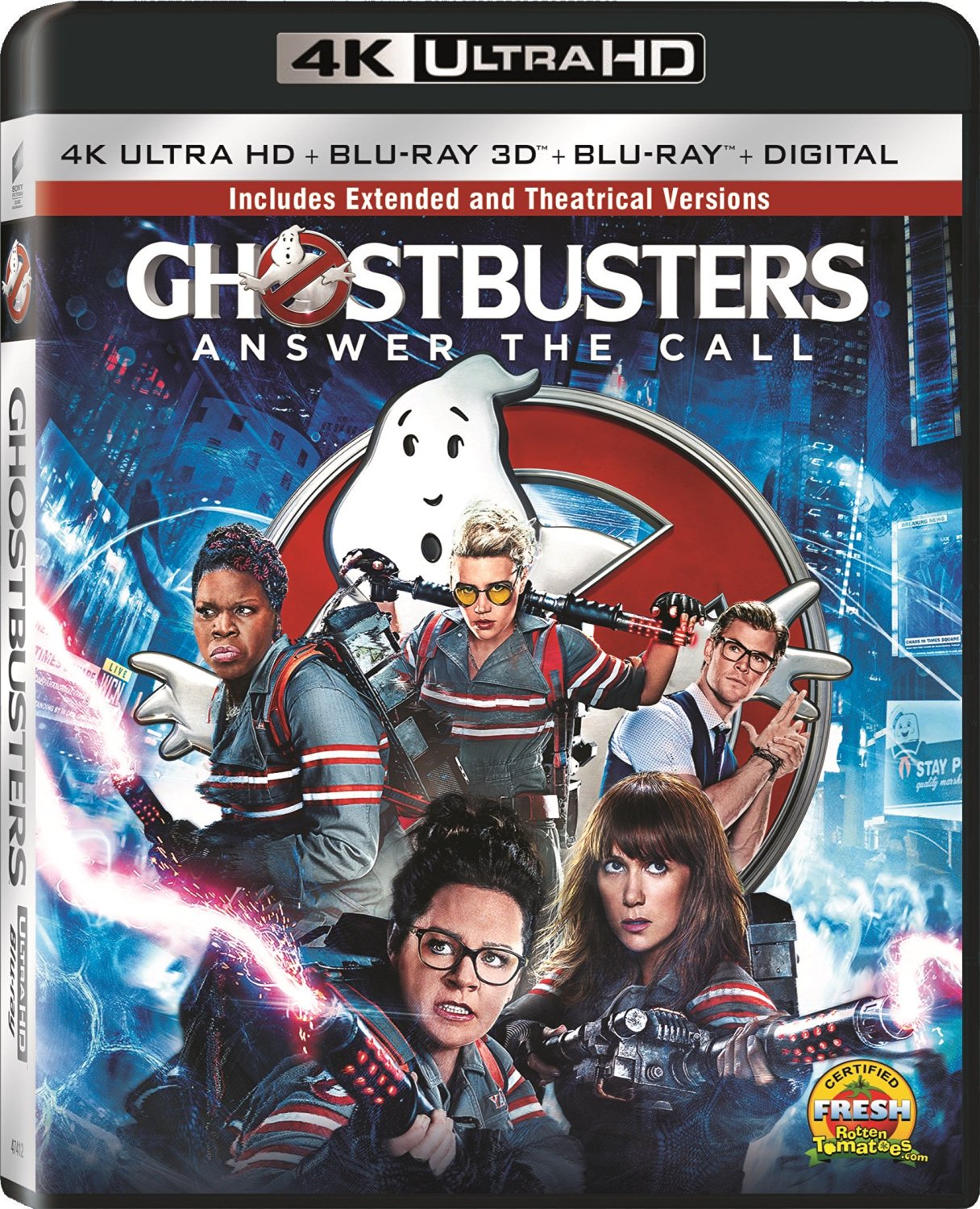