Rich blacks, with superior shadow detail, and gorgeous grain, are the centerpiece of the imagery, and digital clean-up is near pristine.

As noted in the review thread, there is some question about the handling of day for night shots — headlight, buildings lit, etc — and I don’t have the answer. It seems that time of day may have been dusk, but one would have to consult an original print for absolute accuracy.

Sometimes an error in color timing is obvious — townspeople with torches, heading toward the castle, D4N shots that are bookended with night — here it isn’t quite that written in stone.

In some situations, and something to which I subscribe, there is a preference in timing protection positives, be they color or b&w, to allow a day for night exposure that permits printing down at the print stage, as opposed to the dupe, so that more detail is held within the duping elements.

One of the interesting attributes of this film, which was obviously shot on a tiny budget, is the use of miniatures, and graphics, to create what would have pushed the budget far higher to photograph in the real world.

“Screeching tires and screaming sirens are more insistent than rational thought and clichés of passionate behavior are more viable than truth. And Dennis O’Keefe is the fellow, which to movie fans means, of course, that an equal division of interest between love and luggs is thoroughly plausible. Claire Trevor plays the girl whom Mr. O’Keefe gives the raw deal in favor of Marsha Hunt. And anyone watching these two ladies and their behavior in this film might not be inclined to wonder at the change in the gentleman’s choice—even though, as matters turn out, it means that he winds up dead.

Except for the usual moral—to wit, that crime does not pay—the only thing proved by this picture is that you shouldn’t switch sweethearts in mid-lam.” 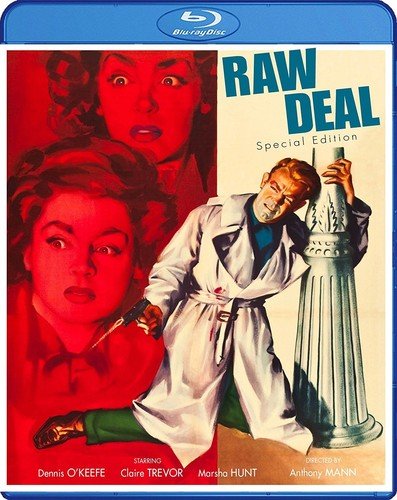