Posted on May 2, 2017 by Robert Harris
"Two thumbs way up, and they couldn't possibly be held higher!" 5 Stars

I’ll make no bones about it.

La La Land was my Best Picture of 2016, and in my humble opinion, possibly one of the finest uses of cinema thus far in this century.

People seen to either get this film, or they don’t.

I’ve probably seen it a dozen times, and each time I see something new.

The consummate Tracy/Hepburn relationship between Emma Stone and Ryan Gosling;

Difficult musical and dance numbers that can go five minutes without a cut;

Night sequences with a single point of illumination.

Shot on film, and finished as a 2k DI, in the early CinemaScope aspect ratio of 2.55:1

Just grab a copy and this disc, and be enthralled.

used delicately, as is HDR. Lionsgate 4k quality all around.

I’m incredibly jealous of those of you who may be seeing this for the first time.

Final word, as my friends, Mssrs Ebert and Siskel would rarely say…

“Two thumbs way up, and they couldn’t possibly be held higher!” 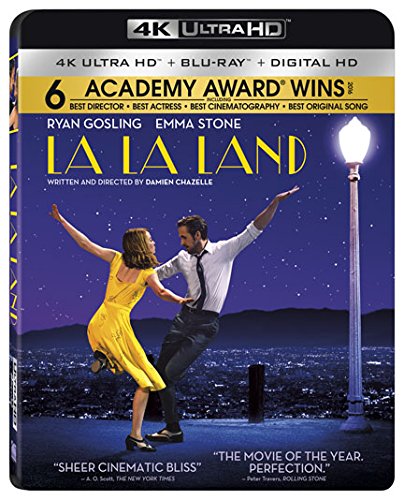