Given the current climate of Hollywood studio productions, it’s a real surprise that sophomore writer-director Damien Chazelle was able to get La La Land made. The result is a remarkable achievement, a film set in modern-day Hollywood in the style of the 1950s and early 1960s musicals that the major studios produced.

Damien Chazelle’s La La Land communicates to its audience that this is an old-fashioned movie musical in the opening frames, starting with a nostalgic-looking logo for Summit Entertainment, a logo for Cinemascope that starts off cropped at 1.33:1, expanding to its full 2.55:1 aspect ratio, and a production number on a gridlocked freeway overpass with dozens of singers and dancers in colorful outfits. Mia (Emma Stone) is a barista at a coffee shop on the Warner Bros. studio lot, rushing off to audition after audition, encountering rude casting agents and their associates who would rather be texting on their phone or grabbing coffee than listen to hundreds of actresses read the same lines over and over. After attending a Hollywood party that her roommates drag her to, she wanders into a jazz club hoping to call a taxi when her car is towed for parking in a red zone, and literally bumps into Sebastian (Ryan Gosling), a jazz pianist who has just been fired from the club for not sticking to the manager’s (J.K. Simmons) playlist of Christmas tunes. Sebastian’s dream is to own his own jazz club in hopes of saving jazz from extinction, but his unwillingness to compromise has been keeping him from steady employment, focusing more on his music than on a paycheck. Mia runs into Sebastian again a few months later at a party where Sebastian is playing keyboards for a 1980s cover band, humiliating him with her request for the Flock of Seagulls’ one-hit wonder I Ran. Pestered by a would-be writer, Mia asks Sebastian to walk her to her car, and the two share a nice dance number on as bluff overlooking Los Angeles. The two eventually fall in love, but as they continue to pursue their dreams and gain varying degrees of  success, that success and compromise (or lack thereof) puts a stress on their relationship.

La La Land has almost all of the ingredients for a great musical: a committed and talented cast (Gosling and Stone were both nominated for Oscars, with Stone winning for Best Actress), a splashy and colorful production design and cinematography (more Oscar wins), a terrific instrumental score by Justin Hurwitz (yes, another Oscar win), and the passion of a young director (Chazelle now holds the record for the youngest director to win an Oscar). Chazelle definitely knows his musicals, and pays tribute after tribute to those films from the 1950s and 1960s with the distinct uses of color throughout, as well as ending the film with an 11-minute ballet that hints at would might have happened to our two main characters had they made different choices. What the movie lacks, however, are memorable songs that linger long after the movie is over. Yes, City of Stars won the Oscar for Best Original Song, but other than the title refrain, this reviewer didn’t find himself singing the lyrics or humming the melody. And that is a shame, because I really enjoyed La La Land, but found myself constantly trying to remember any of the songs from the movie.

La La Land was shot on 35mm film and completed as a 2K digital intermediate. For this release, Lionsgate has upscaled the movie to 2160p and color graded using HDR10. The included 1080p Blu-ray is a pretty solid transfer, but the first thing nearly any viewer will notice on the UHD version is the brighter and more vivid colors that nearly pop off the screen. The use of color is first hinted at during the opening number on the freeway overpass (Another Day of Sun), but the striking use of color and the enhancements provided by HDR really begin to shine after Mia’s audition disaster shortly thereafter during Someone In the Crowd as the sequence moves from her colorful apartment to dancing at night in the street with her roommates (and their deeply colored dresses) to the stylized Hollywood party. Shadow detail is excellent, providing a dark background while still retaining textures on the street and in the fabrics and folds of the costumes. Overall detail is also increased ever so slightly, with freckles on Emma Stone’s face and Ryan Gossling’s beard stubble more distinguished. With the film’s PG-13 rating, I’d be surprised if electronics retailers didn’t use this disc to show the benefits of HDR and sell not only more UHD televisions but also UHD Blu-ray players. La La Land is probably one of the best demo discs out there right know.

La La Land has been given a Dolby Atmos track with a Dolby TrueHD 7.1 core that is well implemented and very immersive, even down to the placement of instruments throughout the viewing area. The movie begins in scatchy mono and sweeps to full Atmos as the Cinemascope logo swipes from a cropped 1.33:1 to full 2.55:1. The track has a wide dynamic range, with quieter passages revealing some very intimate details such as chattering behind closed doors as Mia walks down the hallway after her audition and reverberation of stings froma  piano to crowd noises during the big party scene. Dialogue is always clear and understandable, even during the musical numbers. LFE is used frequently to not only boost the lower end but also to highlight the orchestral percussion. This is a great demo disc in the audio department as well.

As with most recent Lionsgate releases, all of the special features can be accessed on the UHD disc as well as the included 1080p Blu-ray disc.

Audio Commentary with Writer-Director Damien Chazelle and Composer Justin Hurwitz: The two were college roommates and have been good friends ever since, and it shows in this track. The upside is that they are almost constantly talking during the movie, but the downside is that they tend to go off on tangents when the listener may want to know more about what is happening on-screen. A perfect example is the scene where Mia humiliates Sebastian at the 1980s themed party, where the two go on and on about their days working together in a 1980s cover band when I wanted to know more about Emma Stone’s hilarious dance.

Featurettes (1080p; 79:58): An in-depth look at the making of the film, viewable as one long feature or as individual segments. Another Day of Sun: They Closed Down a Freeway, La La Land’s Great Party, Ryan Gossling: Piano Student, Before Whiplash: Damien Chazelle’s Passion Project, La La Land’s Love Letter to Los Angeles, The Music of La La Land, John Legend’s Acting Debut, The Look of Love: Designing La La Land, Ryan and Emma: Third Time’s the Charm, and Epilogue: he Romance of the Dream.

Damien and Justin Sing: The Demos (1080p): Demo versions of What a Waste of a Lovely Night (1:55) and City of Stars (3:13) with black and white behind the scenes footage.

Song Selection (2160p): Quick access to each song in the movie.

Although La La Land suffers from no really memorable songs, it is an entertaining movie that will show off your 4K UHD home theater. Kudos once again to Lionsgate for including the special features on the UHD disc. 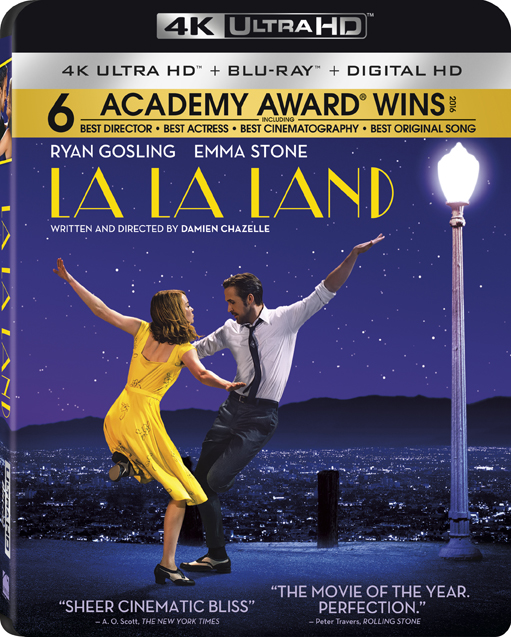