Forum List What's new Dark Style Change width
Log in Register
What's new Search
Menu
Log in
Register
Navigation
Install the app
More options
Dark Style
Close Menu
Posted on June 2, 2019 by t1g3r5fan
You are using an out of date browser. It may not display this or other websites correctly.
You should upgrade or use an alternative browser.
Modern Cult Horror favorite gets Collector's Edition treatment 4.5 Stars

Over the years, the horror anthology has become a staple of genre thanks to films and TV series like Tales from the Crypt, Tales from the Darkside, and Creepshow (1982) to name a few. However, Trick ‘r Treat sets itself apart from the pack for the fact that it also functions as a heartfelt tribute to the Halloween holiday as well as the customs involved. Originally released direct to home video by Warner Bros., Scream Factory has picked up the film and has given it the Collector’s Edition treatment.

On Halloween night in the small town of Warren Valley, Ohio, the festivities are mixed in with a little bit of the macabre for those who don’t honor the traditions. A high school principal (Dylan Baker) teaches one of his students the importance of checking your candy. A group of students come face to face with a dark secret from the town’s past in the local quarry. A young woman (Anna Paquin) looking for a date gets more than she bargained for. And a recluse (Brian Cox) comes face to face with a trick-or-treater who won’t go away without candy. It’ll be a Halloween to remember, but not everyone will be around at the end of the night…

Built upon the anthology film framework of previous genre movies while employing a Pulp Fiction style narrative, Trick ‘r Treat is both an affectionate valentine to Halloween as well as an entertaining horror film. The origins of the movie started as a brief animated thesis film for director Michael Dougherty when he was in film school; it evolved into the film with his main character from the thesis film – Sam – recurring throughout the stories. However, the film never really reached theaters as initially planned; it ended up on the shelf for a couple of years until – after a few screenings at festivals – the movie made its debut on home video where it got some strong notices from fans and critics. Despite its fate, Trick ‘r Treat has managed to already attain a following for its unique take on Halloween as well as offering up a few neat twists along the way.

Among the cast there’s a mixture of fresh faces as well as a few familiar ones. Dylan Baker is notable as the school principal who harbors a dark double life while adhering to the traditions of Halloween; Anna Paquin also has a memorable appearance as the young woman looking for her ‘first time’. Brian Cox is great as the reclusive curmudgeon who faces the tenacious trick-or-treater; young Quinn Lord casts the memorable impression as Sam, the peculiar trick-or-treater who serves as the connecting thread to all the stories. Among those who either survive Halloween night or fall prey to not following traditions are Leslie Bibb, whose character learns you should never take down your decorations before the night is through, Brett Kelly as the young vandal who learns you should always check your candy before eating it, Britt McKillip, Jean-Luc Bilodeau, Samm Todd, Alberto Ghisi, and Isabelle Deluce as the group of students who learn that the town’s urban legend is – in fact – real, and Lauren Lee Smith, Rochelle Aytes, and Moneca Delain as a group of young women who acquire dates, but what happens to them is better seen than talked about here.

The original 2:35:1 aspect ratio is intact in this HD transfer, taken from a new 2K scan of the original film elements. Film grain is organic throughout, with fine details and color palette rendered faithfully and strongly; there’s nary an instance of age related issues, makings this an easy improvement over the previous Blu-ray release of the movie.

There are two audio options for this release: a 5.1 DTS-HD Master Audio track (the default option) and a 2.0 DTS-HD Master Audio track. Both tracks render the dialogue and sound effects strongly, with ambiance and fidelity given to Douglas Pipes’ atmospheric score; there’s hardly an instance of issues related to age on either of these tracks. Whatever your preference, you can’t go wrong because both represent likely the best the movie has ever sounded on home video.

Commentary by director Michael Dougherty, concept artist Breehn Burns, storyboard artist Simeon Wilkins and composer Douglas Pipes – Carried over from the original home video release, the quartet talk about the movie as well as a few interesting stories in the process; all in all, a very entertaining track.

Tales of Mischief & Mayhem: Filming Trick ‘r Treat (19:46) – The second part looks back at the filming stage of the movie as well as a few memories from Dougherty.

Sounds of Shock & Superstition: Scoring Trick ‘r Treat (11:10) – Part three looks at the film’s score as well as some of the inspirations and themes behind it; with Michael Dougherty and composer Douglas Pipes.

Trick ‘r Treat: The Lore & Legends of Halloween (27:25) – Carried over from the original home video release, the featurette looks at some of the Halloween traditions and their origins; narrated by Brian Cox, among those interviewed include producer Bryan Singer, Dylan Baker, authors David J. Skal and Lisa Morton, Anna Paquin, Samm Todd, Brett Kelly, and Michael Dougherty, just to name a few.

Deleted & Alternate Scenes (17:13) – Carried over from the original home video release, eight scenes that were deleted from the film or contained alternate footage from the final cut; viewable with optional commentary by Dougherty.

School Bus FX Comparison (1:13) – Carried over from the original home video release, a side by side comparison of the school bus scene from the numerous effects employed to the final product.

Seasons Greetings Short Film (3:54) – The 1996 thesis film in which the movie had it origins is presented here in a brand new 2K scan from the original 16mm elements; can be viewed on its own or with commentary by Michael Dougherty.

Monster Mash: A Story from the Trick ‘r Treat Graphic Novel – A selection from the graphic novel is presented here in the same fashion in which you can browse through a still gallery.

FEARnet.com Shorts (12:56) – A series of 15 promos for the movie and subsequent all day Halloween movie marathon for FEARnet.com.

Behind the Scenes Still Gallery (13:11) – 160 stills chronicling the production are presented here.

While it may not have gotten the widespread theatrical release it should’ve deserved, Trick ‘r Treat did manage to find an audience and become a modern cult favorite. Scream Factory has well surpassed the previous Warner Blu-ray with a great new transfer as well as a great slate of bonus features both new to this release and carried over from the previous Blu-ray. This is an easy upgrade for fans of the movie.

I first saw this at Rick Baker's Halloween Party in Burbank back in the middle 2000's. It was playing on a monitor as a continuous clip and I knew I had to have it for my collection. But I was told no one knew when and if it would ever come out.

Then Rick Baker took a selected few up to the 2nd story loft of his studio. There, we got to view the original full scale mockup of MIGHTY JOE YOUNG, AMERICAN WEREWOLF IN LONDON, MEN IN BLACK and others...WHAT A NIGHT!!!
Last edited: Jun 3, 2019

Didn't know about it till a friend introduced me to it 3 or 4 years ago. It was enjoyable enough first time, then it managed to work its way under my skin. It somehow always leaves me wanting more, but that's a good show biz tenet too, so what the heck.

As a fan of portmanteau horror films, like those released by Amicus and (my all-time favorite) CREEPSHOW, I snapped up the original Blu-ray as soon as it was released, based upon the great word-of-mouth the film had garnered from the very few people who were able to see it initially. I immediately fell in love with it. It has become an annual Halloween watch around my house. May have to double-dip on this one.

Same. I also loved the puzzle aspect of it, putting it all together. It shares some similarity to another cult favorite, 11:14.
You must log in or register to reply here. 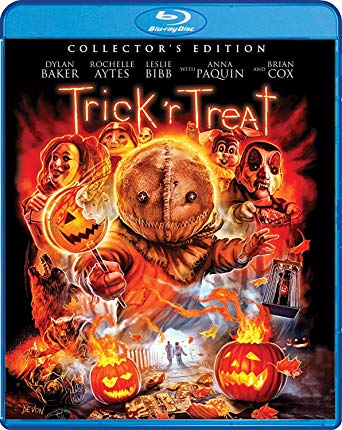