It’s fun to celebrate the anniversary of landmark, important, or runaway pop-culture cinematic successes. Top Gun is certainly one of those films worthy of celebrating on milestone anniversaries. Though it is hard to reconcile that 30 years have now passed since Top Gun flew and barrel-rolled its way into the popular culture landscape, embedding itself on the cultural consciousness as it celebrated its very American self even with a Brit at the helm. An immediate success, the film remains highly quotable and fun to watch.

So what are we to make of Paramount’s celebration of Top Gun’s 30th anniversary? Well, not much frankly. While it’s always nice to have good film’s in print, and the Steelbook option here will please that small quotient of collector’s who treasure such things, the discs themselves are mere repackages of what’s been released before. Sure, it comes with a Digital HD version for those who like the portability (or peace of mind that comes with a ‘cloud’ back-up), nothing else is new. And really, the most fun release of this movie was the surprisingly good 3D version a few years back – that was in addition to the 25th anniversary release, and the release it enjoyed as part of the Tom Cruise Blu-ray Collection (along with other Paramount/Tom Cruise pictures like War of the Worlds and Days of Thunder).

My take on the film hasn’t changed since I first reviewed it. The picture quality and audio options haven’t been improved upon, and the collection of special features hasn’t been added to (or, thankfully, reduced), so if you have a previous Blu-ray version of the film. You’re good. If you don’t have it yet, and can’t find (or want) the 3D version, this 30th Anniversary edition will do the trick, but landmark, important and runaway cinematic successes should be treated as such – either with a new mastering (if possible or required), or at least a new collection of extras – retrospectives and commentaries – you know, the stuff that Criterion does as a matter of course.

“On March 3, 1969 the United States Navy established an elite school for the top one percent of its pilots. Its purpose was to teach the lost art of aerial combat and to insure that the handful of men who graduated were the best fighter pilots in the world. They succeeded. Today, the Navy calls it Fighter Weapons School. The flyers call it: TOP GUN.”

Maverick (Tom Cruise) is the king of the skies. Confident, cocky, and careless at times. And he might just be the best of the best. When Maverick and his co-pilot, Goose (Anthony Edwards) are chosen to attend the elite flight school to compete for the coveted title of ‘Top Gun’, the competitive environment and high-octane action inevitably leads to trouble. Maverick falls for Charlie (Kelly McGillis) – the civilian instructor, engages in a taut rivalry with another fighter pilot, Iceman, and happily flaunts authority at almost every opportunity.

Top Gun helped launch Tom Cruise’s stellar career and with good reason. Cool headed, handsome, assured, and likeable, Cruise – despite being shorter than the traditional leading man – had everything that the big screen and audiences alike cheerfully absorb. And there’s a seriousness about Cruise’s performance – even amongst the predictable ‘rah-rah’ and teed-up fist pumping – that serves as a presage for some of his finest performances through his career in works like Magnolia and Minority Report.

Before his long days and nights as Dr. Mark Greene on NBC’s megahit television series, ER, Anthony Edwards sported a porn moustache to play Goose. The role, an outgoing, easy to like, all-American farm boy type, suited Edwards very well. In the film he’s married to a very young Meg Ryan whose role as a free-spirited southern lovely is a little larger than I remembered. Maverick’s main antagonistic rival is Iceman, played by a reportedly reluctant Val Kilmer. Kilmer doesn’t really get to say or do very much beyond expressing annoyance and irritation at Maverick’s ways, but he does just fine with what he’s given. Kilmer was reported as not wanting to be in the film but appeared due to contractual obligations. If true, one can’t see that in his performance.

Top Gun, beyond all the testosterone aggression and fighter pilot shenanigans, was a love story between Cruise’s Maverick and McGillis’ Charlie. There is chemistry between them but it is slight. The heavy use of the Berlin ballad “Take my Breath Away” hammered home the love element of the story just as Kenny Loggins’ “Highway to the Danger Zone” hammered home the jet action. It’s all a little clumsy looking back, but these two songs in particular helped define the Top Gun experience.

So does it hold up today? Well, yes and no. The plot is straightforward and uncomplicated, staged for the audience to root for the cocky protagonists, and filled with the kind of Americana that action films of the 80’s were thick with. It’s an easy film to have fun with – fighter jets, motorcycles (a sweet looking Kawasaki Ninja 900 / GPz900R), good guys against bad guys, and a healthy dash of the underdog But it’s a little too straightforward and the plotting uneven. Surprisingly, the predictable hero ending doesn’t exactly come to pass as one might have expected, but there’s celebration to be had all the same.

Top Gun moves at a brisk pace and the aerial photography is a chief character in the film. But beyond the simplicity of the outline and the peppering of new and familiar talents, like Val Kilmer and Tom Skerrit, there really isn’t much to it. The late Tony Scott – brother of Ridley Scott (Alien, Blade Runner) – was always a more commercially inclined director than his brother, and his movies are defined by his trademark mosaic cuts, orange sky filters, and A-B-C plotting (with the exception of Déjà vu). Top Gun represents the early stages of his style’s evolution, but this film is undoubtedly his.

Paramount hasn’t taken the opportunity to do anything new with the transfer for the film’s 3oth anniversary. Still, the 1080p HD transfer is still quite strong despite a few nagging areas of weakness. I’ve commented on this in previous reviews of the film, but the most problematic shot is the opening which contains noticeable distortion in the smoke on the Carrier deck as the crew prep the jet launches. The issue with this opening sequence shot has been around since Top Gun appeared on home media so one would have to assume at this point that the problems are with the source material and not the transfer. There are one or two moments throughout the film where some digital tinkering is noticeable – but so brief are these moments that it should not be a bother. It’s in the level of detail where you find in this transfer shines the most, with close-ups being where the most impressive moments live (shots of the cockpit interior really shine.)

The DTS-HD Master Audio English 6.1 still packs a welcome punch. Plenty of room shaking as the fighter jets do their thing and the memorable soundtrack really opens up the audio.

As I said in my last review, surround audio in particular is quite rambunctious and dialogue is issue free in the center channel. I was pleased with how the synth heavy (and not always fitting) score by Harold Faltermeyer came across. I should also note that the cues as heard in the film are not well placed, with awkward transitions between scenes and between score and song. But is all sounds crisp and powerful on this Blu-ray.

The special features available on this disc are the same as those assembled for the 25th 25th Anniversary release and again on the 3D release of the film. I didn’t take the opportunity to watch them for a third time, but as I noted in previous reviews, the production and consultant commentary is a revealing listen though probably more for the unflappable fans than those of a more casual nature. The six part documentary covers quite a bit of ground and is worth the time to enjoy – as are the four key music videos which retain the 80s feel a heck of lot more than the film itself does. Overall, a pleasing set of extras.

Best of the Best: Inside the Real Top Gun

With the advent of 4K, it is a shame that Paramount’s 30th Anniversary wasn’t part of the emerging line up of titles for the format. Perhaps if the format makes it, we might see one for the inevitable 35th anniversary.

As it stands, there’s nothing new (save for the aforementioned steelbook case and, for those that bought the 2011 release, a Digital Copy). For those that have yet to pick up this title, it is selling for less than the previous editions (currently $12.99) – a good price. But an opportunity missed to celebrate the film in the way it deserves.

This was THE showoff Laser Disc and DVD surround sound demo disc @ audio stores!!!
Expand signature
Former projectionist @ all downtown theatres in Balto. City.Which are all closed. I closed the Tower theatre as the head projectionist, I closed the Mayfair as mgr.
Reactions: Eric Vedowski and TravisR

Insofar as the lack of any new extras, perhaps Tony Scott's death may have done something to put the kibosh on that front?

Perhaps a bit of additional restoration would have been nice, though I can't speak from experience, only having the DVD version, which hasn't been viewed in many years!

CHEERS!
You must log in or register to reply here. 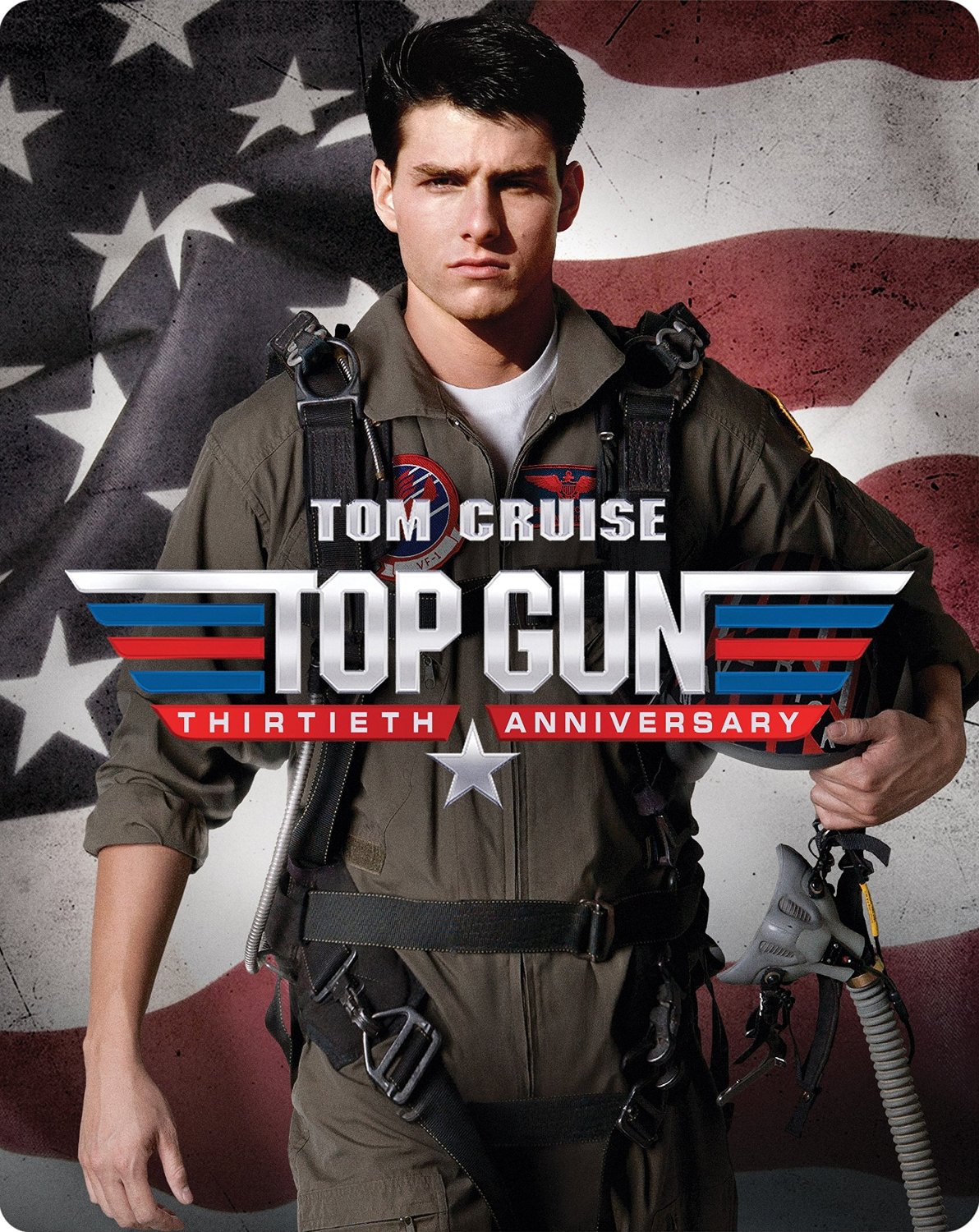