Forum List What's new Dark Style Change width
Log in Register
What's new Search
Menu
Log in
Register
Navigation
Install the app
More options
Dark Style
Close Menu
Posted on December 23, 2019 by Timothy Bodzioney
You are using an out of date browser. It may not display this or other websites correctly.
You should upgrade or use an alternative browser.
Highly recommended for Powell and Pressburger fans. 4.5 Stars

Kino Lorber has released Michael Powell and Emeric Pressburger’s 1952 The Wild Heart on Blu Ray.  Because of Kino’s deal with Disney, who owns the rights to co-producer David O. Selznick’s American cut this may be one of the few times in home video history where the inferior, tampered version is given billing over the original version.  But thankfully Kino has done the right thing and included Powell and Pressburger’s 1950 original cut, Gone to Earth.

Gone to Earth is stylistically and thematically unmistakably an Archers production.  Visually it is similar to previous Powell and Pressburger films such as A Matter of Life and Death, Black Narcissus, and The Red Shoes.  Gone to Earth features lush Technicolor photography by the talented Christopher Challis (A Shot in the Dark, Two for the Road, The Private Life of Sherlock Holmes).  Challis shot several of Powell and Pressburger’s films including The Elusive Pimpernel, The Tales of Hoffman, Oh… Rosalinda!!, and The Battle of the River Plate.  Powell and Pressburger’s color work is particularly striking (whether the DP is Challis or his mentor Jack Cardiff) and often achieves a heightened quality of Technicolor expressionism similar to some of Vincente Minnelli’s work at MGM.

Thematically it is similar to earlier Powell and films such as The Phantom Light, The Edge of the World, The Canterbury Tales, I Know Where I’m Going, and Black Narcissus as well as later films like Ill Met by Moonlight, and Age of Consent.  All of these films deal with how an environment or location shapes character.

The Wild Heart/Gone to Earth takes place Shropshire region of England at the end of the 19th century.  Hazel Woodus (Jennifer Jones) lives with her eccentric father Abel (Esmond Knight), who happens to be a coffin making harpist.  Hazel could be described as a wild child in that she is more attuned with nature than humans.  Her best friend is Foxy, a wild fox she protects from ever threatening hunters.  Hazel’s deceased mother was a ‘gypsy’ who warned Hazel of the dangers of being tied down to a man, which partially accounts for Hazel’s untamed nature.

There isn’t much plot in The Wild Heart/Gone to Earth.  The central conflict is Hazel being torn between minister Edward Marston (Cyril Cusak) and aristocratic rogue Jack Reddin (David Farrar).  One desires her soul and the other desires her body.

The Wild Heart/Gone to Earth is based on Mary Webb’s 1917 novel, Gone to Earth.  It is allegorical with characters symbolizing archetypes.  Hazel represents the untamed midlands country, a primitive land teetering between the ancient and modern world, where men like foxes, go into the earth for their survival.  Marston represents the spirit and a higher love along with conventionality.  Reddin represents the flesh and unconventionality.  Hazel is not amoral or immoral as much as she is pre-moral and has to choose between Marston’s chaste, almost platonic love and Reddin’s hedonistic physical passion, which is perhaps ultimately loveless if not outright nihilistic.

I’ve grown to love Powell and Pressburger movies and can’t think of one that I wouldn’t return to.  Not all of their films are masterpieces and Gone to Earth isn’t, but it is flawed, but very good and features a remarkably sophisticated attitude towards love and sex.  Marston loves Hazel but only wants her on her terms.  The problem with this is that Hazel in unformed and doesn’t know her terms.  Reddin is a hunter and desires Hazel as a hunter desires his prey.  Hazel’s development or well-being mean nothing to Reddin.

As I wrote above, Kino has included both versions, The Archers and Selznick’s cut of the film on this disc.  I would imagine up until the video age that Americans familiar with the film would probably have only seen the Selznick cut.  It is certainly interesting having both available to compare.

The Selznick version is a bit mystifying.  It plays like a Reader’s Digest version of Down to Earth with more close-ups of Jones directed by Rouben Mamoulian after other directors passed.  Selznick removed or shortens shots that create mood or atmosphere.  Selznick tries to make Hazel more sympathetic through cutting.  Selznick also added a prolog narrated by Joseph Cotton.  Selznick’s version sort of feels like watching highlights from an Archers film.  Thank god Selznick’s version did not supplant Powell and Pressburger’s.

Selznick knew of Powell and Pressburger before committing to a deal that included British producer Alexander Korda – similar to Korda and Selznick’s deal with Carol Reed on The Third Man.  More interestingly, is that Selznick approved of the script and occasionally saw rushes and the film as it was being cut.

Selznick was not some crass or unsophisticated producer mercilessly cutting a film he didn’t understand.  Selznick was a great producer, as much an auteur as any director, with dozens of excellent films to his credit.  Selznick’s cut isn’t so much a desecration as it is neutering of a piece.

It seems that Selznick had a double whammy in the second half of his career; the first being having produced what was up to that time, perhaps the most popular movie ever made, Gone with The Wind.  We should all be so unlucky!  It seems that Selznick’s problem was that he wanted to replicate that freakish, once-in-a-lifetime success.  Weighed with this burden Selznick faltered.  I think his pre-Gone with the Wind output is much more interesting than what comes after.  The second curse was marrying Jennifer Jones in what plays like any number of mid-20th century male mid-life crisis novels, plays, or films.

Powell writes in his book that the problem was the Selznick/Jones marriage.  Powell even goes as far as writing the marriage mirrored what is going on in the film – comparing Selznick to Jack Reddin.  Does this make Powell Marston?   Powell is very complimentary towards Jones, even if he does write that she wasn’t very intelligent.  Powell’s book was written twenty years after Selznick’s death and Jones became reclusive in her later years, so we don’t know how accurate this is.

Jennifer Jones was a beautiful, but limited actress whose career lasted much longer than it would have had she not been married to Selznick.  Hazel in Gone to Earth is one of her strongest performances.  If Powell is correct about the relationship, then one can only be sympathetic to Jones, but one has to give the devil his due.  Selznick put Jones in projects involving major directors like John Cromwell, Henry King, Ernst Lubitsch, King Vidor, John Huston, Vincente Minnelli, William Wyler, and Vittorio De Sica.  That’s quite a lineup.  In spite of this resume and Selznick’s efforts Jones never became the kind of star that audiences warmly embraced.

Kino has released both versions on one disc.  To me, both versions look pretty similar, which is nothing more than okay.  There are some registration problems on some shots.  Some shots look like dupes and other sections look pretty good.  I suppose this is the best we’ll get unless a full restoration get performed on the title.

The audio is clean.  Sometimes with a film like this, some of the actors employ intentionally difficult accents; but I didn’t have a problem with any of them and was able to make out all dialogue clearly.

The two versions of the film.  Including the ‘Roadshow’ version of The Wild Heart which includes music preceding and following the feature.

Audio commentary for Gone to Earth by film historian Samm Deighan.  It’s an okay commentary that’s pretty much interpretive.  Little to nothing is talked about regarding the production history or differences in the two cuts.  By her own admission, she leaves those details to Troy Howarth.

Audio commentary for The Wild Heart by Troy Howarth.  Howarth does his usual good job including lots of background information on much of the film’s talent.  Howarth goes into the production history, casting, production, and subsequent legal issues initiated by producer David O. Selznick. A very good commentary of a usually overlooked title.

Gone to Earth/The Wild Heart is not quite top-drawer Powell Pressburger.  It is very good, however and an essential release for fans of The Archers.  This past year has seen so many important titles released that this one has unfortunately kind of slipped under the radar.  Kino is to be commended for including both versions as it is something of a textbook example of producer’s misguided interference diluting a perfectly good film.  I’m hoping we’ll some of the other more obscure Archers titles like The Battle of River Plate and Ill Met By Moonlight released in the US sometime in the future. 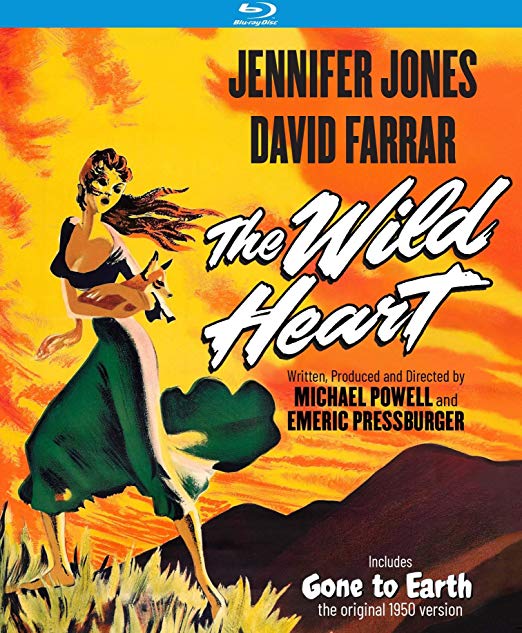