Forum List What's new Dark Style Change width
Log in Register
What's new Search
Menu
Log in
Register
Navigation
Install the app
More options
Dark Style
Close Menu
Posted on December 23, 2019 by Timothy Bodzioney
You are using an out of date browser. It may not display this or other websites correctly.
You should upgrade or use an alternative browser.
Stay away unless you're a John Huston completist 2.5 Stars

Kino through their deal with Paramount has released John Huston’s 1980 thriller Phobia.  In an era when I saw nearly everything released, I missed Phobia upon its initial release.  Critics were merciless and it was quickly run out of town.  I figured; how bad can a John Huston movie be?  It’s taken me nearly 40 years to catch up with it.  You are warned.

I can see the early production meetings:  Let’s make a Canadian Giallo film that’s really a tax shelter.  Who best to direct this kind of movie?  Why of course, 74-year-old John Huston, the man who just made that spooky movie, Wise Blood.  I guess Bob Clark was busy that week.

Phobia doesn’t really have much of a plot.  There’s a setup; young maverick psychiatrist Peter Ross (Paul Michael Glaser) runs an experimental treatment involving patients forced to confront their phobias.  The catch here is that all of the patients are convicts.  Ross’ theory is that the phobia is the root of criminal behavior.  Conquer the phobia and you cure the criminal.

Something goes wrong when the patients start getting bumped off.  The police start an investigation that naturally includes several red herrings.

This is a premise for what could be a good movie.  Who knows what went wrong with Phobia?  The script is an illogical mess.  You know you’re in trouble when a movie has 8 credited and uncredited writers, and that doesn’t include Huston, who as anyone reading this knows started his career as a writer.

In the commentary, Paul Carupe and Jason Pichonsky go over the history and development of the script.  It’s a good example of development hell as the project, over a nearly ten-year period, goes from writer to writer beginning with the talented Gary Sherman (Death Line, Dead and Buried) and his partner Ronald Shusset writing Phobia as a spec script for Hammer.  It goes through multiple writers including Dan O’Bannon (Alien, Return of the Living Dead) before ironically ending up with early Hammer writer Jimmy Sangster.  According to Sherman, the final film most resembles Sangster’s draft with Huston’s assistant Gladys Hill polishing during shooting.

Phobia is a drab film, thematically and stylistically.  One of the flaws of the script is that nobody, maybe with the exception of the victims, is sympathetic.  Characters are either unlikable or undeveloped.  My biggest complaint is that the script doesn’t follow its own logic – the characters are supposed to be getting killed according to their phobia, but two of the five are not.  I can accept the silliest movie if it sticks to its own logic; Phobia doesn’t.

The film’s photography by Bob Clark’s favorite cinematographer Reginald Morris (Black Christmas, Tribute, Porky’s, and A Christmas Story) is erratic with some scenes looking interesting and others looking flat and rushed.  The art direction by David Jaquest is unattractive but typical for the era.  The film also features a bad musical score by Andre Gagnon.

What can I write about John Huston?  He’s a larger than life character whose own persona sometimes detracts from his work.  I can’t think of any movie that he appears in as an actor that isn’t better because of his presence.  He had a long directing career with a number of duds (The Barbarian and the Geisha, The List of Adrian Messenger, Annie), but a remarkable amount of great films (The Maltese Falcon, The Treasure of the Sierra Madre, The Asphalt Jungle).  I don’t think these films are great by accident.

Huston was as good as any director at making movies adapted from literary sources.  The Red Badge of Courage, Moby Dick, and Reflections in a Golden Eye are honorable, if not entirely successful attempts – but I’m always game to re-watch any of these films.  I can’t imagine anyone even trying to tackle The Bible, but I do enjoy Huston’s turn as Noah.  Night of the Iguana may be the second-best Tennessee Williams adaptation after Elia Kazan’s A Streetcar Named Desire.  I’ve always found Key Largo to be underrated because of the Hawks/Bogart/Bacall films and The African Queen and Heaven Knows, Mr. Allison are about as good as Hollywood movies get.

The auteur critics are hard on Huston for various, not necessarily valid reasons.  Andrew Sarris puts Huston in his, ‘Less Than Meets the Eye’ category.  But Sarris’ American Cinema book was written in 1968 and prior to Huston’s late works like Fat City, The Man Who Would Be King, Wise Blood, Under the Volcano, Prizzi’s Honor, and The Dead.  Not a bad final 15 years even when you throw in the misfires.

I do think that because Huston was one of the first directors to gain his independence and operate outside of the studio system, he gets held to a higher standard than some directors who stayed within the system.  Yes, he didn’t have a studio forcing projects on him, and yes Huston clearly did some jobs strictly for the money, but a guy has to pay the bills.

That said, I do think there is a huge difference in films that Huston is invested in and those he isn’t.  Huston is wrong for Phobia on many levels.  Giallos by nature are often illogical or dreamlike but if directed with visual flair like the Dario Argento movies, one can overlook the gaps in logic.  It’s style over substance.  Huston is not that kind of visual stylist.

Huston also tended to be good at casting.  In that sense I think Huston was a bit like Hitchcock in that if a role is well cast, there isn’t much to directing the actors.  In Phobia, he’s not so lucky.  Paul Michael Glaser affects this weird accent, perhaps to convey that he’s an intellectual but it just sounds false and mannered.  Other actors range from good (John Calicos’ creepy detective Barnes) to amateurish (David Eisner’s Johnny Venuti).  There’s so little character development in the script that it’s easy to sympathize with the actors.

Kino’s transfer of Phobia is a bit all over the place.  I’m not sure if it’s off of a print or an IP.  Colors look fine is some sequences and in others have a weird, distorted effect.  Almost like looking at something under a black light.  I have no idea how it looked originally; I would imagine not too good.  There doesn’t look like any clean-up was done on the transfer.

Audio is fine especially considering the amount of location shooting in the film.

An audio commentary by Paul Carupe of Canumxploitation.com and film historian Jason Pichonsky.  I was nervous when I first started listening to the commentary because the two spend more time than necessary talking about the validity of the main character’s therapy.  That’s something that one shouldn’t even give a moment’s thought for this kind of movie.  But after that, the pair give a good and informative commentary with the highlight being the above-mentioned history of the script.  They also give a good explanation of the production and of the concept of the Canadian tax shelter era of movie-making.  I think they are stretching when they try to apply any connections to this film and any earlier Huston films – let alone any personal commitment on Huston’s part.

Interview with actress Lisa Langlois in which she recounts her problems with the nudity her part ‘required.’

I’m not going too far out on a limb when I say that Phobia is John Huston’s worst film as a director.  The script is a mess and while it’s technically competent if dull, and the performances are not well directed.  The film has a bit of an identity problem, it’s weak as a thriller lacking any good set pieces or sustained suspense and not scary or grotesque enough to qualify as a horror movie.  The worst two things that can be said of the movie is that it’s stupid and dull.  Stupid isn’t always the worst thing but being dull is unforgivable.  It’s a blip in a string of interesting late-career projects by director John Huston.

Nice review except for the unneeded slam at Annie which I consider one of the best film musicals of the last 50 years. This links it to both Fiddler on the Roof and Starsky and Hutch with the casting of Paul Michael Glaser. So it at least has one use: for playing "Six Degrees of X". I still can't comprehend how Huston went from Wise Blood, an excellent film whose absence on Blu-ray is inexcusable at this point when it got a Criterion DVD, to this. This sounds so bad that even Grease 2 would have been a step up!
You must log in or register to reply here. 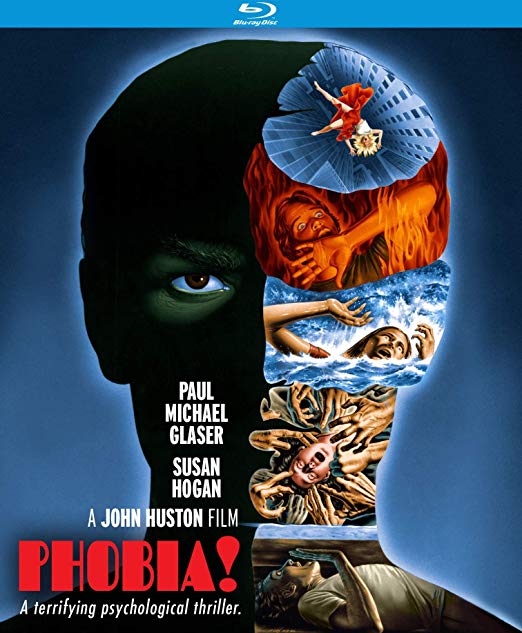