Forum List What's new Dark Style Change width
Log in Register
What's new Search
Menu
Log in
Register
Navigation
Install the app
More options
Dark Style
Close Menu
Posted on June 5, 2018 by Matt Hough
You are using an out of date browser. It may not display this or other websites correctly.
You should upgrade or use an alternative browser.
A nebbish involved with a deadly femme fatale makes for a somber tale 3 Stars

A nebbish out for revenge gets waylaid and settles instead for a cockeyed brand of wish fulfillment in Harold French’s The Man Who Watched Trains Go By.

A nebbish out for revenge gets waylaid and settles instead for a cockeyed brand of wish fulfillment in Harold French’s The Man Who Watched Trains Go By. Also known in film circles as The Paris Express, this film frustrates as much as it entertains as the viewer watches an intelligent, honest, and moral man give up rather easily to the temptations of the flesh and the frolic. While the location Technicolor camerawork is luscious and the actors are quite wonderful ones, there seems to be something missing in this narrative, that moment where the man we’ve assumed all along has an ace up his sleeve proves instead to be playing the joker.

Milquetoast Dutch bookkeeper Kees Popinga (Claude Rains) has toiled for eighteen years for his merchant boss Julius de Koster, Jr. (Herbert Lom) and is proud of his preciseness and scrupulous honesty. But he is mortified to learn that his boss has been siphoning money from the company for years to keep French con woman Michele Rozier (Märta Torén) living in luxury. Leaving for Paris with the last of his firm’s funds, de Koster is stopped by Popinga before boarding the train and a fight leaves him pitched into the canal and Popinga with a valise filled with money on the train to Paris accompanied by French detective Lucas (Marius Goring) who has been tracing the black market money from Holland to France. In Paris, Popinga manages to connect with Michele who charms him into believing they can go away together and live handsomely on the stolen money, all the while her murderous accomplice Louis (Ferdy Mayne) is waiting for the right moment to strike Popinga down and abscond with Michele and the money.

Based on the novel by Georges Simenon, director Harold French’s screenplay has been modified from its source material, but he never quite establishes why a man with a loving wife and two wonderful children seems to go so quickly off the rails and take his boss’s place in forgetting everything in order to live out the fantasy of a carefree lifestyle with a blatant con woman and without strings or ties to the past. Until nearly the end of the film, one is convinced there’s a method to the chess-loving Popinga’s madness: some plan in the back of his mind in which he’ll catch the crooks red-handed, turn them into the authorities, and return to his loving home poorer but contented that he’s done the right thing. But that isn’t the story at all, and one must content himself with the cat and mouse shenanigans he engages in with the crooks (who are desperate to find the money he’s hidden) and the policeman on his trail (who wants to get to him before he goes too far into irredeemable criminality). French’s direction allows us to see some fetching Technicolored glimpses of Paris (Bois de Boulogne, Maxim’s) and keeps things moving even if he doesn’t quite manage to create enough sustainable suspense in the process.

Claude Rains is quite heartbreaking as the nebbish bookkeeper on a spree for the first time in his life though his desperation over his life choices might have been more keenly conveyed from the get-go. Marius Goring is excellent as the detective anxious to bring down the guilty parties while protecting the innocent ones. Märta Torén has the utter confidence of an experienced femme fatale as she wraps one man after another around her little finger. Look quickly to see the young Anouk Aimée as a prostitute out to trap Popinga. The young Herbert Lom is playing decades older than he actually was as the deceitful de Koster. Ferdy Mayne sends off some sinister sparks as Louis, and Felix Aylmer makes a quick cameo as a disgraced bookkeeper Popinga tries to help in the early going. Lucie Mannheim plays Popinga’s loving wife with care.

The film’s theatrical 1.37:1 aspect ratio is conveyed in a lovely 1080p transfer using the AVC codec. Excepting a few dust specks (which are a little heavier in a later reel), the imagery is beautiful throughout with strong Technicolor camerawork manned by Otto Heller. Sharpness is outstanding, and contrast has been consistently maintained with strong black levels making for an admirable picture. The movie has been divided into 18 chapters.

The audio encode is DTS-HD Master Audio 2.0 audio, and like other monaural tracks of the era, the dialogue, sound effects and background music (by Benjamin Frankel) are all blended together with surety. There is somewhat noticeable hiss from the midpoint onward, and an occasional pop or two is also heard, but none of these age-related artifacts are too distracting.

There are no bonus materials on the disc.

The Man Who Watched Trains Go By is one of the lesser known Claude Rains film vehicles, and it’s certainly worth watching even if it doesn’t compare to the best of his 1940s’ output. The Classic Flix Blu-ray release offers beautiful Technicolor imagery and decent sound of its era to accompany its melancholy narrative.

Thank you for this review. I admire all the main players in the cast, so I'll be buying this disc based on your opinion of the picture quality.
You must log in or register to reply here. 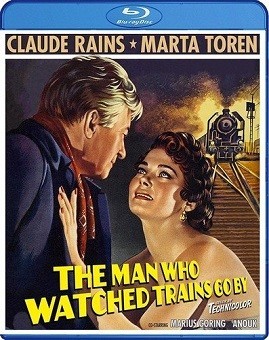