Forum List What's new Dark Style Change width
Log in Register
What's new Search
Menu
Log in
Register
Navigation
Install the app
More options
Dark Style
Close Menu
Posted on June 5, 2018 by t1g3r5fan
You are using an out of date browser. It may not display this or other websites correctly.
You should upgrade or use an alternative browser.
Cult horror trilogy gets a quality Blu-ray release 3.5 Stars

Larry Cohen – a low budget filmmaker with origins in television – has garnered a following over the years with his unique style of melding social commentary within genre pictures predominately in the 1970’s and 1980’s. It’s Alive (1974), along with its sequels It Lives Again (AKA It’s Alive 2; 1978) and It’s Alive III: Island of the Alive (1987), stand out in Cohen’s filmography as those when the elements of social commentary, horror genre standards, and – mostly the case of the third movie – some humor are held in near perfect mixture. Now, with Scream Factory’s release of the trilogy – via license from Warner Bros. – fans and newcomers can bask in the glory of, arguably, the director’s crowning achievement.

Note: the synopses for the the three films may contain spoilers/important plot points.

In It’s Alive, Frank and Lenore Davis (John P. Ryan and Sharon Farrell) are eagerly expecting the arrival of their second child, but it quickly fades into horror as the newborn is hideously deformed and kills the doctors and nurses in the delivery room before escaping into the city. As the Davis baby proceeds to leave a trail of victims in its wake – it kills when its frightened – the police, lead by Lieutenant Perkins (James Dixon), want to stop the carnage, as does the pharmaceutical company whose fertility drug used by Lenore may have caused the baby’s deformity. Caught in the middle are Frank and Lenore, torn between parental responsibility and the madness surrounding their child; it all leads to a tense and surprising climax in the LA sewers.

A few years later, in It Lives Again, Frank – now assisting couples with babies like his infamous spawn – comes in contact with expecting couple Eugene and Jody Scott (Frederic Forrest and Kathleen Lloyd) and warns them of the vast government conspiracy involving other mutant babies; the proof comes in the form of Mallory (John Marley), a high ranking government official tasked with the killing the mutant children, who appears at the local hospital the night Jody goes into labor. Frank manages to help the couple elude the authorities and their child is one of three being studied by doctors in an attempt to curb the homicidal nature of the babies. It leads to the babies escaping and doing what comes naturally to them: attacking and killing anyone they view as a threat to them.

Several years after the events of the first two films, It’s Alive III: Island of the Alive chronicles the plight of the Jarvis couple (Michael Moriarty and Karen Black), whose child is one of the mutant children exiled to a secluded island thanks to Stephen’s plea for his son’s life in court. Years later, he accompanies a group of people headed for the island to study how the mutated children have grown. What they find there is that the babies are now adults, giving birth to a new generation of mutant babies. And the adults want to return to the society that had abandoned them…

For a franchise that is generally considered schlock, the It’s Alive trilogy offers up some thought provoking social commentary that’s held up surprisingly well over the years. Ideas like environmental fears, the right to life and to be accepted alongside the irrational fear of what we don’t fully comprehend still have relevance in our crazy world today. Acting wise, character actor John P. Ryan and Cohen favorite Michael Moriarty are the standouts of the franchise; the former being given the rare chance to play a leading role in a movie while the latter gives a performance that manages to be both wild yet endearing at the same time; it’s hard to dislike a guy who just wants the best for his son, even if he is a mutant baby. Other notable names lending their talents to the series include actors Michael Ansara, Cohen regular James Dixon (who appears in all three movies in the series), Eddie Constantine, Macdonald Carey (making his final film appearance in It’s Alive III), Gerrit Graham, Andrew Duggan, cinematographers Fenton Hamilton (a longtime camera operator during MGM’s golden age) and Daniel Pearl, editor Peter Honess, composers Bernard Herrmann and Laurie Johnson, and makeup artist Rick Baker.

All three films in the set have been given brand new 2K transfers from the original film elements performed by Warner Bros.; for those who keep track of this, both It’s Alive and It Lives Again open with the original WB logo designed by Saul Bass. The films look very good with little to no print damage, dirt, dust, or speckling present. Film grain is solid and natural with a steady color palette. In short, this release is by far the best that these films have ever looked on home video. Each film is divided into 12 chapters.

Our very own RAH has done A Few Words About article on this set, https://www.hometheaterforum.com/community/threads/a-few-words-about-%E2%84%A2-its-alive-trilogy-in-blu-ray.357346/

It’s Alive and It Lives Again both contain a DTS-HD Master Audio 2.0 mono track while It’s Alive III: Island of the Alive has a DTS-HD Master Audio 2.0 stereo track. The dialogue is clear and understandable throughout while the music by Bernard Herrmann and Laurie Johnson is excellent in terms of sound quality, allowed to fully breathe without a hint of distortion, crackling, popping, or hissing evident. Again, this is probably the best these movies have sounded on home video. Optional English subtitles are provided on all three films.

Commentary by Larry Cohen on all three films – Ported over from Warner Bros.’ previous DVD releases of the films, these commentaries are rich in background, recollections and stories from all three films. Whether its stories on his friendship with the great Bernard Herrmann or recalling how his home was utilized for certain parts of It Lives Again, Cohen always comes off as insightful and engaging. A few sentences here don’t begin to do full justice, but they are definitely worth a listen.

Cohen’s Alive: Looking Back on the It’s Alive Films (18:14) – A brief retrospective featurette focusing on the trilogy featuring interviews with Cohen, film historians F.X. Feeney and Jon Burlingame, and key members of the cast and crew: cinematographer Daniel Pearl, producer Paul Kurta, and actors James Dixon, Michael Moriarty, and actress Laurene Landon. The only downside is that It Lives Again is just briefly mentioned and didn’t really have anyone from that installment to talk about it – I’m guessing that Frederic Forrest and Kathleen Lloyd were either unavailable or wanted nothing more to do with the killer babies.

It’s Alive at the Nuart: 40th Anniversary Screening (13:26) – Filmed in 2014, it’s taken from a Q&A session that Cohen participated in at the showing and basically covers the same main points he made in his commentary and retrospective featurette. We learn that Sharon Farrell was originally going to take part in the ceremony, but couldn’t attend due to health problems.

Interview with Special Effects Designer Steve Neill (It’s Alive III) (10:11) – This brief interview highlights some of the challenges and memories Neill had working on the final installment of the trilogy, succeeding of course, the legendary Rick Baker.

Still Galleries – a collection of behind-the-scenes photos, production stills, and vintage advertising materials from all three films; It’s Alive (56 photos at 4:46), It Lives Again (44 photos at 3:40), and It’s Alive III: Island of the Alive (35 photos at 2:50)

The It’s Alive trilogy has earned its keep over the years with its uniquely deft blend of social commentary and tongue-in-cheek humor amid the macabre trappings. It helped establish Larry Cohen as a singular voice in the independent filmmaking world and has come to be regarded as among his best work. This Blu-ray release represents the best that these films look and sound and with with a nice glut of bonus features, fans will have plenty to enjoy and hopefully will entice those on the fence to finally jump in and see for themselves why it acquired a following over the last forty years. Upgrade, or buy, with confidence, my friends. 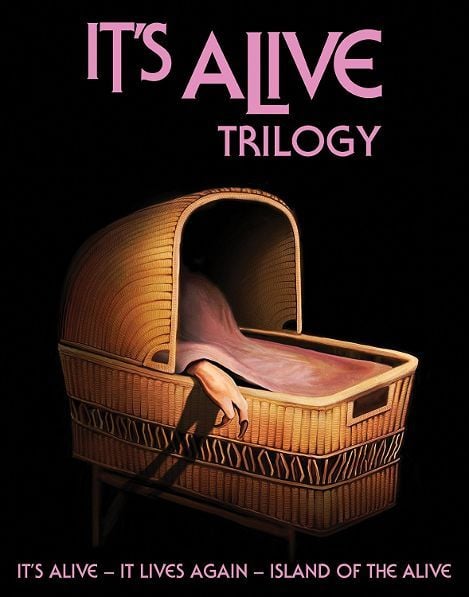