Forum List What's new Dark Style Change width
Log in Register
What's new Search
Menu
Log in
Register
Navigation
Install the app
More options
Dark Style
Close Menu
Posted on October 9, 2020 by Matt Hough
You are using an out of date browser. It may not display this or other websites correctly.
You should upgrade or use an alternative browser.
Magnificently understated western is unforgettable in its power and eloquence. 4.5 Stars

One of the great, brooding westerns that came after the end of World War II, Henry King’s The Gunfighter does a deep, introspective dive into the psyche of a haunted killer.

One of the great, brooding westerns that came after the end of World War II, Henry King’s The Gunfighter does a deep, introspective dive into the psyche of a haunted killer, a man who’s got the reputation he always craved and realizes when it’s too late that it’s more a curse than a blessing. Terrific leading performances, smooth, effortless direction pitched at just the right tone, and just enough tension to keep one on the edge of his seat, The Gunfighter ranks among Hollywood’s greatest oaters.

Fast draw expert Jimmy Ringo (Gregory Peck) has at least a dozen actual kills to his name (though rumor has it that the number runs toward fifty), an accomplishment that makes him the target of every ambitious young gunman in the West who’s eager to make his own reputation by conquering Jimmy. Arriving in Cayenne, New Mexico, to see his wife Peggy (Helen Westcott) and eight-year old son who are living there under aliases for their own protection, Peggy has no wish to see him again despite efforts by local marshal Mark Strett (Millard Mitchell) and saloon singer Molly (Jean Parker) to reunite the family. But Jimmy doesn’t have much time for his reconciliation: three brothers are seeking revenge for their dead sibling, the last man Jimmy shot in a gunfight; local blowhard Hunt Bromley (Skip Homeier) is certain he’s a faster shot than Ringo, and a grieving father is out for vengeance thinking Jimmy killed his boy several years previously.

The screenplay by William Bowers and William Sellers (based on a story by Bowers and Andre de Toth) is far less interested in Wild West action than it is in exploring the darkness behind the legend of a famous gunslinger. Being the best always means there’s someone nipping at your heels wanting the glory that you have. What the film presents is that the glory isn’t so glorious: it’s lonely, depressing, and anxiety-filled having to always look over your shoulder or behind every rock for your next face-off with death knowing your time will inevitably have to run out as age takes from everyone a certain degree of quickness, alertness, and agility. And yet with Johnny Ringo’s dire fate hanging over our heads for almost the entire eighty-four minute running time, the writers find time for a few lighter moments and some sentimental ones, too: the town women’s auxiliary demanding an end to the dastardly varmint not realizing they’re requesting his death to the man himself, the marshal’s momentary dumping of water over a pair of slowly brawling cowpokes, Jimmy’s heartfelt meeting with his son offering great fatherly advice without revealing to the boy who he actually is. And director Henry King wrings every ounce of tension out of the three conflicting situations (the vengeful father, the determined brothers, the young town bully, each operating independently to bring down Ringo) set up to end Jimmy’s life right at the moment he may be able to redeem it. If the film has a weakness, it may be in the climactic church service that seems a bit too good to be true after what has come before, but otherwise, the film doesn’t make a wrong step and keeps itself on the move despite its introspective nature.

Gregory Peck gives one of his most unforgettable performances as Jimmy Ringo: exhausted by his own legend and yet hopeful he can find a better future for himself and his estranged family. Allegedly one of the performances of which he was most proud, Peck’s portrayal shows that the youthful cockiness and conceit are mostly gone, only to be observed when his back is against the wall against reckless punks or cowards who insist (out of his presence) that “he don’t look so tough,” and his wary intelligence never leaves him as he tries to guard himself from every ambush, one reason he has lived to the ripe old age of thirty-five. As his best friend from the old days, Millard Mitchell is wonderful trying to accommodate his buddy but also looking out for his town’s well-being. Helen Westcott gives an appealing, understated performance as Jimmy’s wife whose love has never stopped but whose determination to make a life for herself and her son supersedes it. Karl Malden scores in an early role as an amiable bartender, and Jean Parker is caring personified as the wife of one of Jimmy’s former partners-in-crime. Ellen Corby and Verna Felton excel as clucking town do-gooders while Richard Jaeckel and Skip Homeier both display the reckless youthful bravado that will earn them either quick deaths or quick reputations.

The film’s new 4K digital restoration displays its beauty in every moment of this 1.37:1 transfer at 1080p resolution. The film is clear, clean, and sharp, and the grayscale is beautifully rendered with deep black levels and impressive shades of gray in the shadows of Arthur Miller’s beautiful cinematography. The grain level is quite film-like, and there are no scratches, splices, dirt, or damage to be seen. The movie has been divided into 11 chapters.

The PCM 1.0 sound mix is strong and very typical of its era. Though composer Alfred Newman has written a spare score that’s pretty much saved for the beginning and end, the dialogue has been beautifully recorded and has been mixed with professional surety with the film’s sound effects. There are no problems with age-related hiss, pops, crackle, or flutter.

Gina Telaroli Interview (22:53, HD): the filmmaker offers a brief bio of director Henry King’s acting and directing careers, mentions the benchmarks of his filmography, and then offers a video analysis of The Gunfighter.

J.E. Smyth Interview (22:45, HD): the film historian offers a biography of Oscar-winning film editor Barbara McLean and explains the craftswoman’s technique of cutting and her preference of editing around character.

Henry King Audio Interview (35:49): interviewed in 1971 by historian Thomas Stempel, the director discusses his approach to directing and mentions several of the films on which he has worked including Jesse James, David and Bathsheba, 12 O’Clock High, and The Gunfighter.

Barbara McLean Audio Interview (33:11): interviewed in 1970 by Thomas Stempel, the film editor goes back in time to recall how she worked her way through the film business beginning in the silent era mentioning along the way Lilac Time, Coquette, The Gallant Lady, Les Miserables, House of Rothschild, Little Old New York, The Black Swan, and The Gunfighter.

Enclosed Pamphlet: contains cast and crew lists, information on the video and audio transfer, and a thoughtful essay on the movie by film critic K. Austin Collins.

One of the greatest movies in the filmography of director Henry King, The Gunfighter offers some of the same muffled tone and rising tension of its more famous sibling High Noon and features one of Gregory Peck’s greatest performances (even if his character mustache cost the film a million dollars at the box-office according the Fox studio head Darryl Zanuck). The crackerjack Criterion Blu-ray release offers sterling sound and picture. Highest recommendation!

RAYA AND THE LAST DRAGON [Blu-ray]

In the Line of Fire

Thank you for your fine review. I will be buying this disc at the first sale that comes to me.
H

What a beautifully written review! I'm not generally into Westerns, but your description of this made it sound so interesting that I want to see it. When you can make someone interested in a film they had previously thought they did not need to see, that's impressive.

Robert Crawford said:
Thank you for your fine review. I will be buying this disc at the first sale that comes to me.
Click to expand...

Sadly it does not appear to be part of the Target B2G1 sale ...

B-ROLL said:
Sadly it does not appear to be part of the Target B2G1 sale ...
Click to expand...

Yeah, I was hoping it would be, but no luck. Anyhow, there is a rumor that Criterion might be having a sale this week so perhaps I can score it there.

Harold Chasen said:
What a beautifully written review! I'm not generally into Westerns, but your description of this made it sound so interesting that I want to see it. When you can make someone interested in a film they had previously thought they did not need to see, that's impressive.
Click to expand...

How very kind of you to say so! I really appreciate it.
C

Ordered this today, launch day + criterion 50% off on the same day!

dpippel said:
Same here, PLUS I had a $10 code for bing a Criterion Channel subscriber.
Click to expand...

I also had a code, which they sent me last spring out of the blue. I am not a subscriber. I guess you're not so special after all

I also picked up Battle of Algiers and Destry Rides Again. I think I exercised considerable self-control this sale.

Chewbabka said:
I also had a code, which they sent me last spring out of the blue. I am not a subscriber. I guess you're not so special after all
Click to expand...

Well, I'll have you know that I *am*special! 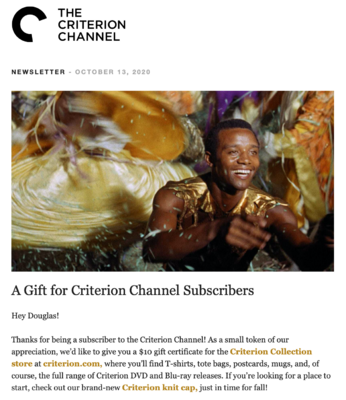 One of the finest westerns ever produced!

Also free to watch on Tubi channel and the HD digital version is $9.99 on Google Play

JackieT said:
Also free to watch on Tubi channel and the HD digital version is $9.99 on Google Play
Click to expand...

After watching the Criterion Blu-ray this weekend, I compared it to the HD digital and it's not even close video or audio presentation-wise. Whenever I want to watch this great film again, the Blu-ray will be my only choice for such a viewing. It's that much better than the digital.
H

I just saw this via streaming on Tubi, which had a somewhat better quality stream than Roku's own app (at least on my setup). I really liked it, particularly the ironic ending. So, I'm very glad to hear that the BluRay is even better quality. I'll be buying it in the next few days (whenever I get out of the house!)

Matt, thanks again for your review. I never would have watched it without the review, and I would have missed out on a real gem.

Great review! I picked this up at Barnes and Noble just yesterday and I plan to watch it this weekend!
You must log in or register to reply here.