CBS’ Scorpion, which was one of the surprise hits of the 2014-2015 season, obviously tried to up its ante for its sophomore run. Thus, the missions became more complex and far more international in scope, and there was far more emphasis on the personal lives of the five-person genius squad set as an adjunct to Homeland Security to solve unsolvable problems around the world.

CBS’ Scorpion, which was one of the surprise hits of the 2014-2015 season, obviously tried to up its ante for its sophomore run. Thus, the missions became more complex and far more international in scope, and there was far more emphasis on the personal lives of the five-person genius squad set as an adjunct to Homeland Security to solve unsolvable problems around the world. While the five main characters continue to be unique and appealing, the show’s move away from pure science to accentuate the thrills and spills contained in each episode became more than a little formulaic and increasingly more ridiculous.

The make-up of the squad remained the same from season one: with a measured I.Q. of 197, Walter O’Brien (Elyes Gabel) continues as the leader of a ragtag squad of fellow geniuses they’ve named Scorpion that can solve the most highly complex problems. On board are fellow geniuses Toby Curtis (Eddie Kaye Thomas), a psychiatrist with gambling addiction issues, Happy Quinn (Jadyn Wong), a mechanical expert who can fix just about anything, and Sylvester Dodd (Ari Stidham), a human calculator. Also a part of the team are Paige Dineen (Katharine McPhee) who serves as the conduit between the geniuses and the real world and their Homeland Security liaison Cabe Gallo (Robert Patrick). Taking more of an active role in the team’s activities especially later on in the season is Paige’s genius eleven-year old son Ralph (Riley B. Smith). New government officials who give the team their assignments change during the season. For the first three episodes, it’s Adriana Molina (Alana De La Garza), but after that, it’s Katherine Cooper (Peri Gilpin), though she, too, fades from view midway through the season with assignments coming directly through Cabe Gallo.

The team works together as a kind of multi-headed MacGyver (another show CBS is rebooting in the upcoming season) using the strengths that each of the masterminds possesses to brainstorm answers to the complex problems which they are presented. This season, they travel the globe for their missions venturing to, among other locales, Cuba, the United Nations, Vietnam, Fort Knox, a couple of different countries in Africa, Antarctica, and Chernobyl in Russia. Along the way they must deal with a runaway satellite, extract DNA from a war criminal hiding in Cuba, work undercover in a prison, deal with the hacked electronic innards of a smart building, stop a runaway subway car, infiltrate Area 51, maneuver a fungus outbreak in a hospital, repair a cracked hydroelectric dam, redirect underground gas lines after an earthquake, and defeat drug smuggling drones en masse. While the episodes are all complexly conceived and scripted, there is a growing sameness to the perils week by week that make the episodes rather ludicrous when watched more than one or two at a time. Each mission always begins well and then goes wrong in stages, each stage putting one or more of the team’s lives in danger and requiring greater and greater ingenuity to think their way out of certain death situations which always arise and which are almost always countdowns to ultimate disaster.

The cast remains the show’s greatest strength. Elyes Gabel as Walter O’Brien remains a charismatic British actor who has a rock solid American accent and quite believably portrays one of the world’s smartest humans. He has instant chemistry with all of his fellow actors particularly bonding with Riley B. Smith’s Ralph and the close if often abrasive give and take with Robert Patrick’s flinty but caring Cabe Gallo. The other actors portraying geniuses all equally convince as their hyper-smart characters and find appealing nuances (Ari Stidham’s sweetness amid his OCD and other phobias, Eddie Kaye Thomas’s sly wit and dry delivery, Jadyn Wong’s appealing combination of toughness and tenderness). Katharine McPhee’s rather bland presence remains viable around these super smart outsiders though this season the writers have allowed her to contribute ideas to problems rather than merely standing on the sidelines. This season, the writers have spent too much time dealing with the romantic lives of the team members. Walter continues to carry a torch for Paige though he does have a couple of episodes in which he’s involved with Linda (Brooke Nevin), a somewhat eccentric young woman whose life Walter saves. Toby and Happy have an off again/on again romance that culminates in a surprise revelation in the season finale. Sylvester’s romance with Walter’s deathly ill sister Megan (Camille Guaty) reaches a climax this season, and in his eagerness to honor her, he manages to get selected as a contestant on The Price Is Right making for one of the most delightful sequences staged the entire season. Walter makes a new friend this season, a homeless guy with good intentions Ray Spiewack (Kevin Weisman) who appears in multiple episodes. A new Homeland Security intern Tim Armstrong (Scott Porter) is brought in late in the season to romance Paige and serve as a thorn in Walter’s side as he miserably watches Paige and the whole team grow closer to a strong new presence.

Here are the twenty-four episodes contained on six DVD discs contained in the second season set. The names in parentheses refer to the participants in that episode’s audio commentary:

The series is presented in the widescreen television aspect ratio of 1.78:1 and the transfers are anamorphically enhanced for widescreen televisions. Sharpness and color saturation are somewhat uneven in quality in these standard definition transfers (last year offered the series on Blu-ray with transfers that were superior to the broadcast quality). Softness creeps into various shots on occasion, and color values fluctuate rather wildly in different light conditions. Contrast has been consistently applied, however, and black levels can still be very impressive. There are issues with occasional moiré patterns and aliasing spotted in several episodes. Each episode apart from supersized episode #6 has been divided into 6 chapters. The longer episode has 8 chapters.

Broadcast television doesn’t get much better than the audio mixes for this action series presented here in Dolby Digital 5.1 (a Dolby Digital 2.0 stereo surround track is also provided). Music by Brian Tyler and Tony Morales gets impressive spread through the front and rear channels. Dialogue has been well recorded and has been placed in the center channel. Atmospheric effects get the split surround treatment with impressive pans through the soundstage during high speed chases, and fairly frequent explosions really rock the LFE channel.

Audio Commentaries: the most disappointing bonuses in this year’s set, both of these commentaries are practically worthless with the producers spending much of the episode making inside jokes and gabbing about things other than offering information about the production of the series. Perhaps the commentary for “White Out” is the better of the two, mostly since the episode was so unique since a soundstage set substituted for Antarctica.

Deleted Scenes: two scenes are provided for the season premiere “Satellite of Love.”

Quintis (2:32): the actors express their opinions in this vignette filmed after the shooting of the episode “Adaptation” in which Toby and Happy made their relationship official.

Breaking Brilliance (29:03): producer-director Sam Hill narrates a feature on how a typical episode of the show, in this case the season finale which he directed, is put together including the brainstorming work in the writers’ room, the seven days of pre-production including location scouting and meetings on all aspects for the production, the eight days of filming, and the multiple days of post-production work with editing, looping lines, adding the visual and sound effects and music.

Creating Reality: Visual Effects (8:56): visual effects supervisor Larry Detweiler expresses his excitement over Scorpion having now an in-house production company for the show’s many special effects. He mentions three which he felt were particularly impressive ones for the season: the weather balloon in the season premiere, the tornado, and the cracking dam.

Geeky Gadgets (8:34): props master Bob Good describes the job he and his team face each week making contraptions for the team to solve problems. Katharine McPhee, Elyes Gabel, and Jadyn Wong especially praise the efforts of the prop department.

Scorpion: The Comic Book (4:46): The twelve page comic book that was created to distribute free at Comic-Con is discussed by Nick Santora and Nicholas Wootton.

Location, Location, Location (11:23): location manager Murray Miller discusses the great convenience of southern California in providing many locations which can take the Scorpion team around the world. Nick Santora, Nicholas Wootton, and Sam Hill also offer their thanks to have locales within easy driving distance that allow the team to traverse the world.

The adventures get wilder and woollier for our team of geniuses in season two of Scorpion. While the show offers mindless thrills and excitement, its increasingly outrageous circumventing of scientific fact and theory and the tiresome romantic entanglements which bookend each episode make the show a bit harder to swallow this season as opposed to its better premiere year. And CBS’ decision to only release the series on DVD this season instead of Blu-ray is another bitter pill to swallow. 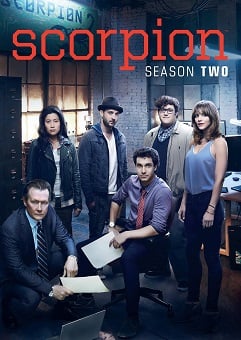