Fans may be deliriously happy with the transcription of the game Warcraft onto the big screen, but it’s actually a rather ordinary fantasy combat adventure with a very predictable narrative and a mixture of visual effects which vary from spectacular to disappointingly artificial.

Bringing beloved computer games to the big screen is a risky proposition. In the case of Duncan Jones’ Warcraft, the filmmakers must stay true to the world of the game and yet dramatize their characters into a narrative that must be more than simply endless bloody battles. Sadly, the story concocted for the film is predictable from beginning to end with the expected treacheries, heroics, personal losses, and turnabouts that one finds in all of fantasy combat cinema. Fans of the game may get weak in the knees with the prospects of seeing their beloved computer world replicated with well known actors and brought to life with the aid of cinematic wizardry, but the rest of us are likely to find the film overly familiar, lacking magic, and, on the whole, rather dull.

With their world dying, the Orcs led by their shaman Gul’dan (Daniel Wu) are planning to take over the human realm of Azeroth where there are still trees, water, and the potential for life. To defend their beloved Azeroth from these monstrous invaders are King Llane (Dominic Cooper), his mightiest warrior Anduin Lothar (Travis Fimmel), and the powerful guardian wizard Medivh (Ben Foster) who has been struggling of late to be at his full strength. As the two races collide, Orc warrior leaders Durotan (Toby Kebbell) and his closest friend Orgrim (Robert Kazinsky) begin to believe war might not be the best answer and also believe Gul’dan doesn’t actually have the best of intentions for the Orcs. A hybrid orc/human Garona (Paula Patton) likewise sees the issues on both sides of the question and wants to work with the humans to possibly work out some sort of an agreement with the Orcs.

Director Duncan Jones has co-written the screenplay with Charles Leavitt, but anyone who’s seen the Lord of the Rings trilogy isn’t going to be overly impressed with the rather simplistic scenario they’ve come up with to tell the story of the conflicts between the Orcs and humans. There are the two noble leading warriors – Durotan for the Orcs and Lothar for the humans, each has a son though only Lothar’s is of combat age (Burkely Duffield playing Callan, unquestionably not long for this world), two warring wizards – Gul’dan on one side and Medivh on the other though it’s obvious each is only able to retain his powers by nefarious means, and, most importantly, an apprentice wizard Khadgar (Ben Schnetzer) whose inexperience and yet eagerness to please time after time comes to the rescue of the humans. In trying to serve all of these characters, the film seems splintered and sometimes meandering, and as the action reaches a late fever pitch, things kind of go off the rails as Medivh turns to the dark side (that’s no spoiler, he’s from the beginning becoming surrounded by the icky green influx of fel (bad magic), and a stone creature comes to life which Lothar must battle before he can return to the battlefield and avenge the death of his son by Blackhand (Clancy Brown), a warrior imbued by Gul’dan with extraordinary strength. Even so, their climactic face-off is going to be a bitter, bitter disappointment to fanboys expecting the fight of the century. Actually, none of the combat in the movie makes for any kind of memorable encounter, and director Duncan Jones, while admittedly having to direct this story through mounds of special effects which would be added after principal photography is done, does nothing extraordinary with the toys he gets to play with, toys which fairly often make their artificiality keenly felt instead of blending into the reality of the humans and some real sets which surround them.

The film’s best two performances are given by Ben Schnetzer who brings real enthusiasm and youthful exuberance to the role of Khadgar and Travis Fimmel who displays the same kind of fierce authority as Lothar that he shows on his television series Vikings. Dominic Cooper has an earnestness and regality as King Llane, and his queen Ruth Negga is similarly majestic in a much smaller role. Paula Patton is just okay as the hybrid Garona. Ben Foster, however, is a keen disappointment as the treacherous Medivh, a leaden performance that the actor seems to be mostly sleepwalking through. Motion capture artists playing the primary Orcs are Toby Kebbell, Robert Kazinsky, Clancy Brown, Anna Galvin (as Durotan’s wife Draka), and Daniel Wu, and all do marvelously well with their voice work and body language.

The film’s 2.40 theatrical aspect ratio is faithfully delivered in this 1080p transfer using the AVC codec. The movie is spectacular to look at with clarity second to none (clear enough to spot some of the fake animals which have been digitally inserted into the terrain) and details in hair, fabrics, and facial features very strong. Color is quite vibrant and rich with lush skin tones and with reds and blues coming across particularly vividly. Contrast has been consistently applied for a reference quality image, increased by superb black levels and fine shadow detail. The film has been divided into 20 chapters.

The Dolby TrueHD 7.1 core which my receiver extracted from the Dolby Atmos sound mix present on the Blu-ray disc is as impressive as the visual quality. Dialogue has been well recorded and has been placed in the center channel, but the fronts and rears are alive with the vibrancy of Ramin Djawadi’s music and the impressive use of split atmospheric effects for all of the battle scenes and other situations which require aural immediacy which the track offers in spades.

Deleted/Extended Scenes (13:57, HD): eleven scenes may be watched together or individually.

The Fandom of Warcraft (6:36, HD): the intensity of fan support for the world of Warcraft is discussed by director Duncan Jones, producers Thomas Tull, Michael Morhaime, and Charles Roven, and actors Ben Foster, Rob Kazinsky, and Clancy Brown and by several rabid fans of the game and film.

Warcraft: The Madame Tussauds Experience (7:32, HD): the staff of Madame Tussauds Wax Museum explains the months of preparation necessary to unveil the Warcraft exhibit in the museum. Toby Kebbell and Paula Patton express astonishment at the lifelike nature of the exhibit.

ILM: Behind the Magic of Warcraft (2:59, HD): a brief montage of scenes showing the layering necessary to build the world of Warcraft.

Fans may be deliriously happy with the transcription of the game Warcraft onto the big screen, but it’s actually a rather ordinary fantasy combat adventure with a very predictable narrative and a mixture of visual effects which vary from spectacular to disappointingly artificial. There is nothing disappointing about the video and audio quality of this Blu-ray release: reference in every possible way. 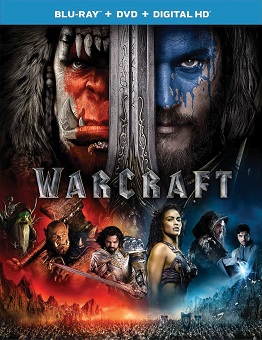